French startup Agri.Builders has developed a novel accessory for the DJI Matrice 200 to support organic agriculture practices at orchards

The use of drones in agriculture is not exactly new. Farmers have been leveraging drones at various stages of the crop cycle to manage their operations more efficiently – including using heavy industrial drones to spray measured amounts of pesticides across the fields.

What is new, however, is the use of drones to treat crops with bio-control technologies such as mating disruption. And that’s exactly what was witnessed at AirWorks 2020, DJI’s annual gathering of commercial drone professionals, technology experts, and policymakers. 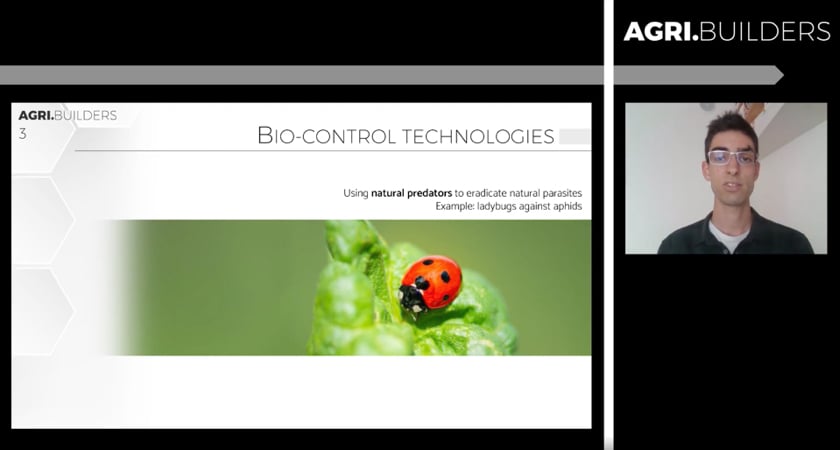 Bio-control technologies: An alternative to pesticides

Following the continued widespread public concern about the harmful effects of chemicals in agriculture, many countries have issued regulations limiting the use of pesticides.

Bio-control is the name given to a collection of methods that protect crops from various kinds of parasites by using natural solutions instead of chemical substances. For example, pitting ladybugs against small sap-sucking insects called aphids. 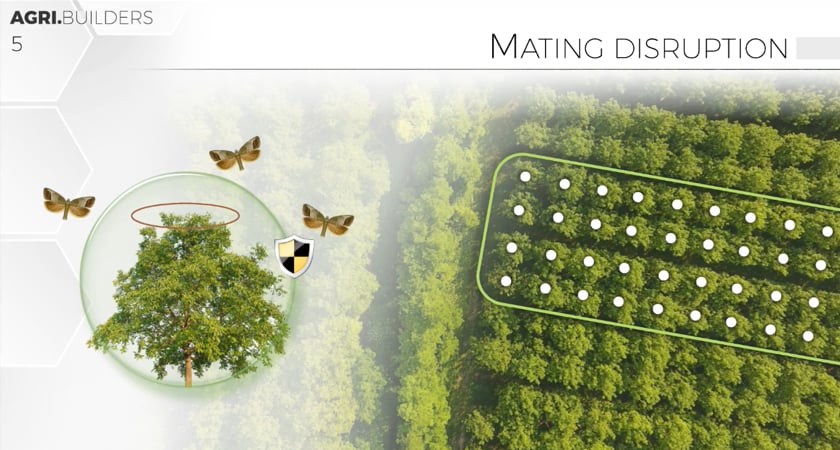 Mating disruption is another efficient, cheap, and eco-friendly alternative to some pesticides. Accredited as an organic farming technique, the method uses pheromones-coated dispensers to prevent insects from breeding, instead of killing them with chemicals.

Years of research and testing have shown that mating disruption can be as effective a method for pest management as conventional pesticides, without the disastrous consequences on biodiversity, ground and water pollution, or on the health of the farmers and consumers. The format has proven to be particularly successful at vineyards and tree orchards that are routinely devastated by grape berry moth and codling moth.

In France, and in many other European countries, farmers are increasingly treating trees with pheromones just before the moth’s mating season. However, placing pheromone dispensers as high as possible in the tree canopy to ensure optimum results is a logistical challenge for most, especially considering the tall trees in walnut and chestnut groves.

French startup Agri.Builders has been working on utilizing DJI drones to make this whole process much cheaper and easier to implement. 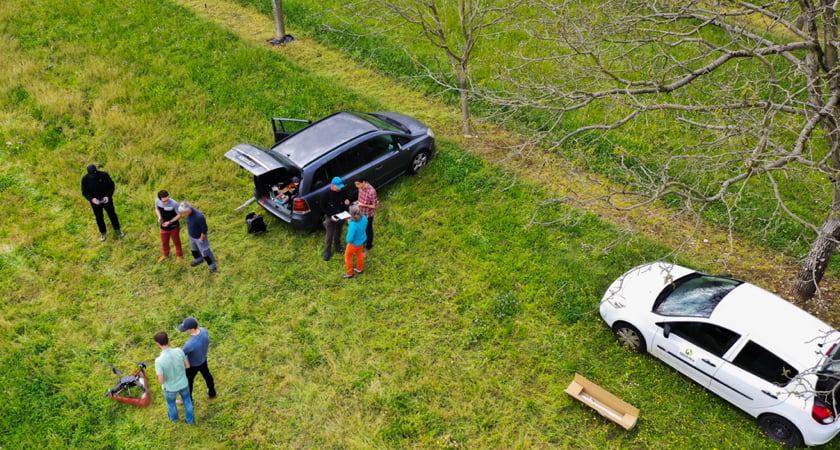 Antoine Boudon, Co-founder and drone pilot, Agri.Builders, explained the concept of Pherodrone during a breakout session at AirWorks 2020.

To be clear, Pherodrone is not exactly a drone, but an add-on accessory that can transform heavy professional drones such as the DJI Matrice 200 into a bio-control tool. Using this add-on, a DJI Matrice series drone can carry and transport dozens of pheromone diffuser rings in a single flight and drop them one after another on walnut, chestnut, apple or pear trees. 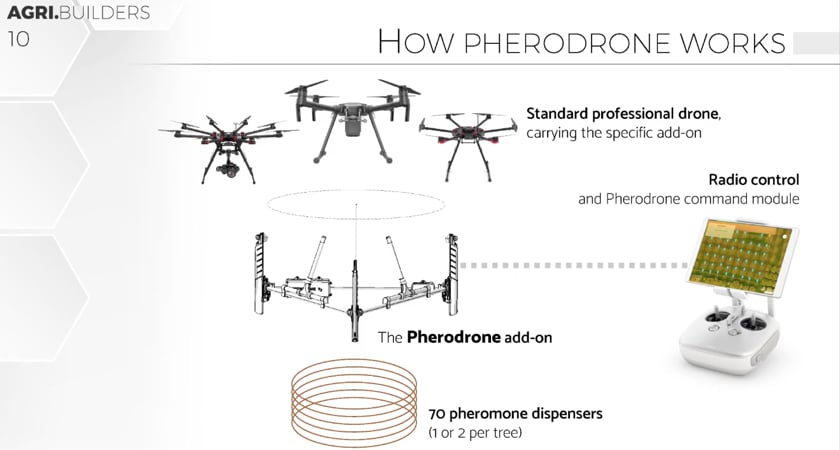 “Our challenge was to build an add-on that could carry as many pheromone dispensers as possible with minimal weight and space obstruction,” Boudon points out.

Pherodrone was originally launched as a student project at Centrale Lyon engineering school in 2017 but has gained independence since. 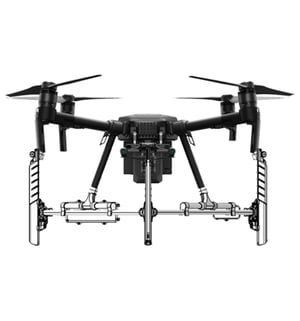 The prototype has been built using aluminum rods and 3D-printed plastic parts to ensure that the full load weight does not exceed 1.5kg when up to 70 pheromone-dispensing rings are stacked onto the bracket. Boudon contends the system can cater to 150 trees per hour, or approximately 1 to 2 hectares of agricultural land per hour, subject to variations in tree height and other on-site conditions.

“We have met quite a few agricultural workers who have been using mating disruption techniques for years and are ready to ditch their standard, time-consuming and laborious methods of using long poles or lift vehicles in favor of the Pherodrone solution. Even those who have not used mating disruption yet have expressed interest in this efficient but not-so-mainstream solution yet,” Boudon says. “Crop spraying remains banned in France, so we found an alternative that could legally be implemented with a drone.”

With his startup now working on automatizing mission planning through a pre-flight survey that would generate a height precision map of trees – including mapping GPS coordinates for precise drop-offs – Boudon and his two fellow co-founders expect Agri.Builders to take on large-scale deliveries for forestry as soon as 2022. 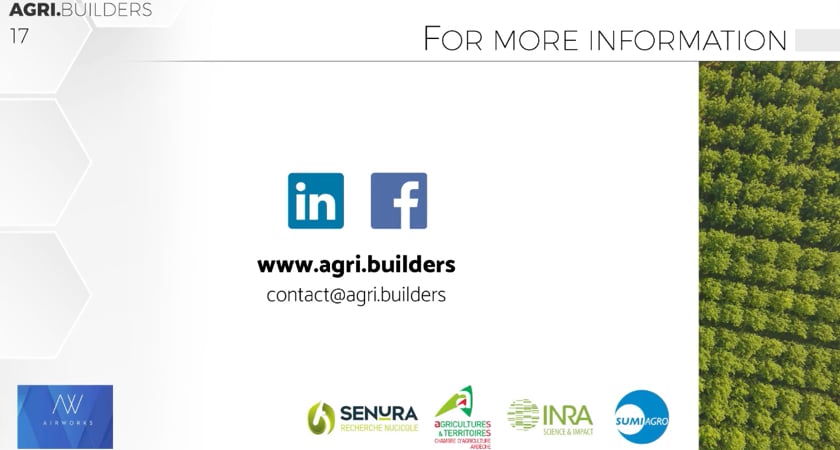 At the same time, engineering students at Centrale Lyon are working on another bio-control innovation – dispensing trichogramma wasp pupae to control the population of corn borer moth in cornfields – and Boudon briefly introduces that project also in his talk.

If you registered to attend AirWorks 2020 but missed out on Boudon’s breakout session, be sure to catch all the exciting details about Agri.Builders by watching the talk here.

The decision to deploy drones in place of traditional data gathering methods is a significant step, and it’s one that forward-looking surveying professionals are taking in huge numbers.
END_OF_DOCUMENT_TOKEN_TO_BE_REPLACED

Update October 14, 2020: This buying guide has been updated to include DJI’s newest surveying solutions, the Zenmuse P1 and L1.  As drone technology is becoming increasingly streamlined and...
END_OF_DOCUMENT_TOKEN_TO_BE_REPLACED

Think about the traditional use of drones in a police department after an incident is reported: An officer arrives on the scene, takes the drone out of the police vehicle, assembles it, checks the...
END_OF_DOCUMENT_TOKEN_TO_BE_REPLACED

Crash scene reconstruction is a vital part of police work. In the aftermath of a traffic accident, there are usually more questions than answers facing first responders. The what, why, and how of the...
END_OF_DOCUMENT_TOKEN_TO_BE_REPLACED