How drones are being used to take on mankind's oldest enemy: malaria

Covid-19 has been dominating the headlines throughout 2020, but another everpresent and deadly disease continues to kill hundreds of thousands of the world’s most vulnerable people every year.

Malaria and the mosquitos that carry it are an ancient enemy. And now, after a century of limited innovation in the field of area-wide preventative solutions, drone technology is playing a huge role in a promising new approach.

In an irrigated rice agro-ecosystem in Zanzibar, Tanzania, the Anti-Malaria Drones team sprayed a series of rice paddies with a biological control agent called Aquatain. The agent works by covering the standing water - the usual breeding grounds for mosquitos - with a thin film that disrupts the insect’s usual lifecycle and prevents adult mosquitos from emerging.

The fields were sprayed with an Agras MG-1S drone, modified by the DJI R&D team to handle a payload more viscous than usual pesticides. 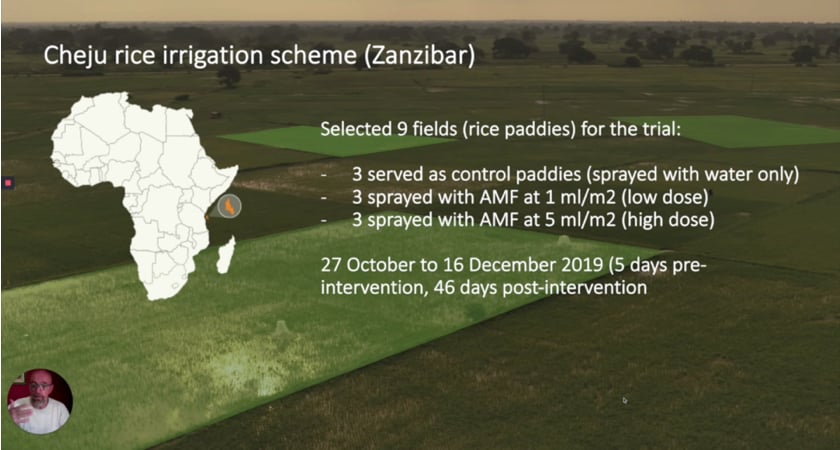 The results were dramatic. Compared to the control fields, drone-sprayed fields saw highly significant reductions in the number of mosquito larvae and pupae and more than a 90% reduction in the number of emerging adult mosquitoes for more than one month after.

Knols points out that the African continent spends more than $12 billion on treating Malaria every year. And the socio-economic implications of the casualties and disruption the disease causes go far beyond that.

It’s estimated that drones can spray these areas 10 to 50 times faster than manual methods, while they are significantly cheaper than using manned aircraft. Those gains look set to increase with the latest DJI Agras T16. In fact, Knols envisages a future in which AI guides these aircraft, patrols known mosquito breeding sites, and automatically gets to work.

In an inspiring talk, Welter and Knols showcase how drones can serve as a disruptive tool in the fight against Malaria worldwide. They also suggest the same automated spraying technique could be used to slow the spread of other water-borne diseases such as Bilharzia.

Anti-Malaria Drones is working closely with the Zanzibar government to explore how they can scale up operations and actively seeking partners to carry out more large-scale pilot projects around the world.

If you missed out on ‘Beating an Ancient Scourge: Using Drones to Fight Malaria Mosquitoes’, you can rewatch the presentation here.

With the rise of large commercial buildings across the US, the demand for safe and effective inspection of rooftops has been growing substantially.
END_OF_DOCUMENT_TOKEN_TO_BE_REPLACED

We are now inching toward a place in time where most people begin to wonder: why did I make that New Year’s resolution? Well, we may not be able to help you out much in your pursuit of a “newer,...
END_OF_DOCUMENT_TOKEN_TO_BE_REPLACED

For most households, energy bills are a consistent and expensive outgoing. These costs peak during the winter months when the cold arrives. The U.S. Energy Information Administration predicted that...
END_OF_DOCUMENT_TOKEN_TO_BE_REPLACED

Delivery drones could very well be The Next Big Thing for businesses to deliver goods to their customers. They can also be extremely helpful in transporting sensitive items such as medical supplies...
END_OF_DOCUMENT_TOKEN_TO_BE_REPLACED