As COVID-19 continues to demonstrate what the word “disruption” truly means, First Responders and others in the Public Safety sector adapt to the new abnormal brought about by the pandemic – and continue carrying out their work. For Rich Gatanis, a firefighter/EMT with the Southern Manatee Fire and Rescue District in Florida, it’s clear drones may well provide new use-case scenarios during this crisis.

“I think COVID-19 is a perfect example of why this technology is important,” he says.

Gatanis is the Unmanned Aerial Systems (UAS) Coordinator for his fire district. He’s been working in the field since 2003, long before drones came along as a tool for First Responders. Roughly five years ago, he was a key part of his department’s decision to purchase its first drone – a DJI Inspire 1.

That drone quickly proved to be an asset, offering live situational awareness previously unimaginable. As the fleet expanded, one incident in particular quickly demonstrated the utility of having an aerial perspective. It was a sulphur fire at the Port of Manatee in Manatee County FL.

Sulphur fires are tricky. In this case, the large pile of powdered sulphur was about 60-70 feet, roughly 22 meters high. But sulphur flames are not visible to the naked eye during daylight. This was a scenario where a drone equipped with thermal imaging would be invaluable.

The command post, says Gatanis, was about a quarter mile from the actual fire. With live streaming of both thermal and visible imagery, decision-makers were able to obtain key information without putting responders at risk.

“I had four or five chief officers watching over my shoulder as I was flying,” he says. “That was probably the catalyst that kicked it off for us to find newer ways to use a drone.” 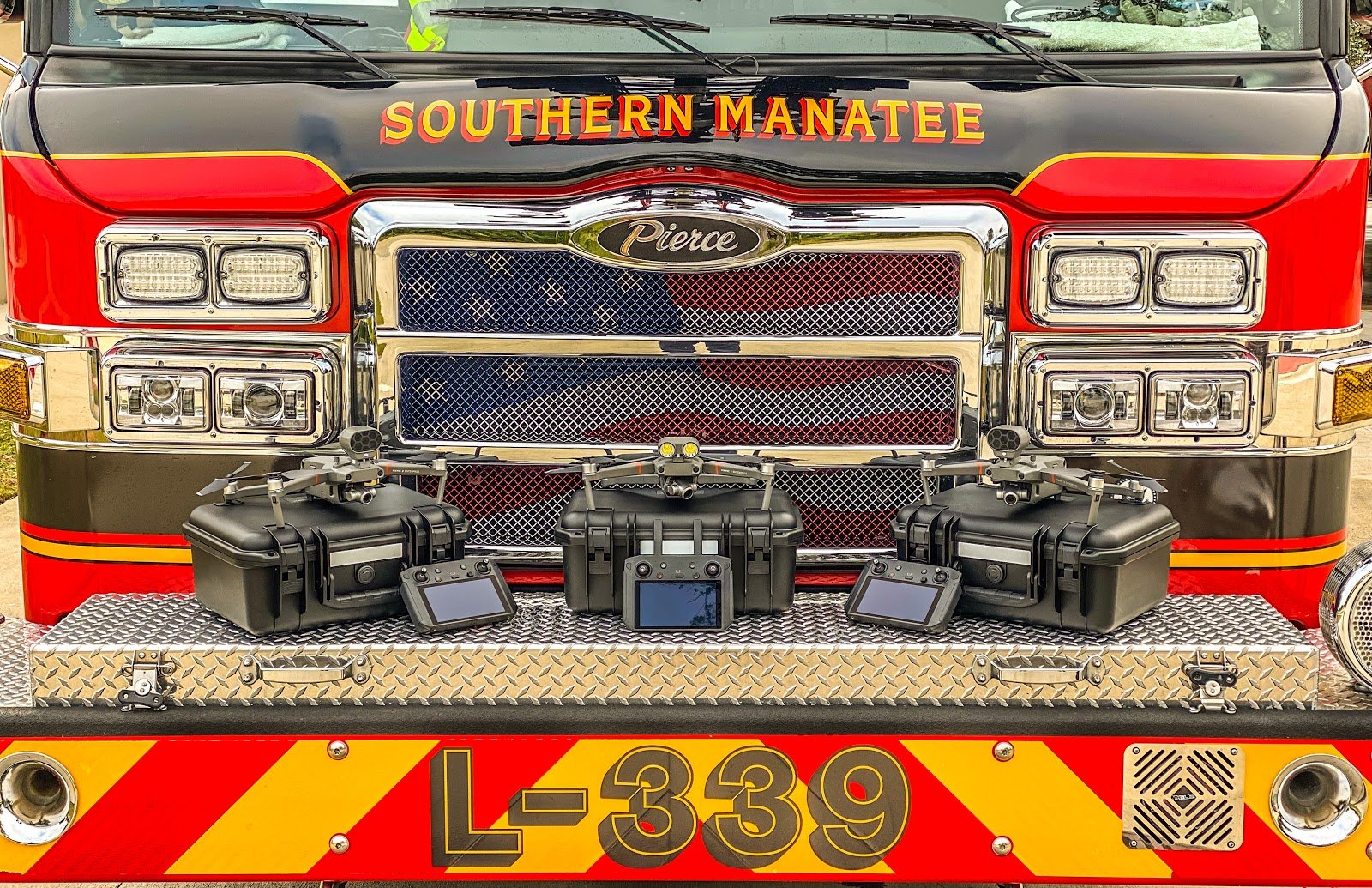 All images courtesy of Southern Manatee Fire and Rescue

Fast forward to January of 2020 – and the early inklings that COVID-19 could well become an issue beyond China. DJI’s Senior Director of Public Safety Integration, Romeo Durscher, was watching events unfold – with a particular interest in the rapid adoption and unique deployment of drones.

Examples included DJI’s deployment of its Agras agricultural spraying drones, adapted to dispense disinfectant rather than fertilizer or herbicide. Drones were also used to monitor body temperatures for anomalies, and even to ensure compliance with a mandatory face-mask policy.

In one highly unique use-case, drones were deployed to suspend signs bearing QR codes directly above lines of traffic, a technique so highly visible it virtually guaranteed drivers or passengers would scan with smartphones to obtain critical information.

“I’m watching with fascination,” says Durscher. “The fact drones were already being used for this made me think: ‘How are we going to roll this Disaster Relief Program out?’”

DJI had first announced this program at the company’s AirWorks 2019 conference, which focuses on cutting-edge enterprise use-case scenarios. The idea was to help ensure that First Responders needing additional drone resources during natural disasters or catastrophic events would be able to access these crucial tools.

During February and into March, the potential threat to North America of COVID-19 began to rapidly accelerate. Over those weeks, Durscher had numerous internal discussions at DJI – as well as consultations with his extensive Public Safety Sector connections. There was consensus that drones could be put to new and important uses during the crisis, and that it was critical that supply meet demand in a timely fashion.

On March 25, DJI announced that the program would be going into effect. First Responders were invited to catalogue their needs, and Durscher, along with Wayne Baker – a career fire chief recently appointed by DJI to direct Public Safety Integration alongside Romeo – would assess those needs and try to prioritize where to shuttle critical resources based on the best evidence available. 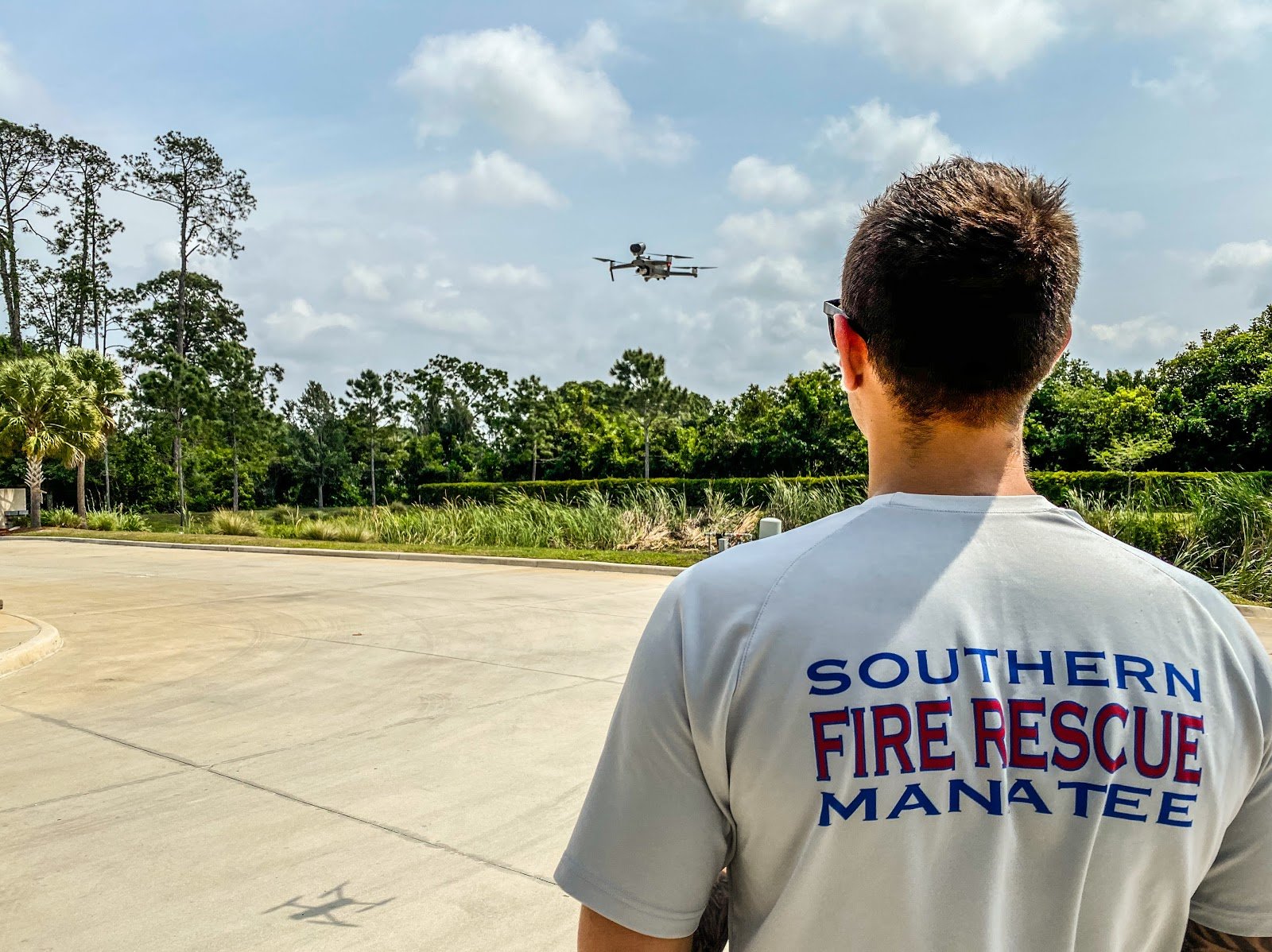 “We are not pandemic experts,” says Durscher. “We don’t have the ability to just make magical assessments of the situation. But by looking at datasets we were able to really support those areas that needed it.”

Those early assessments – which included identifying New Jersey and California as initial key areas of need – proved bang-on. The urgency of those requests dovetailed with the unfolding data identifying areas that were being hit especially hard by the early days of the pandemic.

At the same time, Durscher created a living document outlining and documenting the growing use-case scenarios for drones during COVID19. That piece of UAS history, which continues to evolve, has already pinpointed such potential uses as:

In Florida, the Southern Manatee Fire and Rescue department, in conjunction with FLYMOTION – an end-to-end technology solution provider that specializes in the unique needs, training and support of First Responders who use drones – developed a decontamination solution for UAS. This is a key advance – and potentially a critical piece of the puzzle as COVID19 evolves. 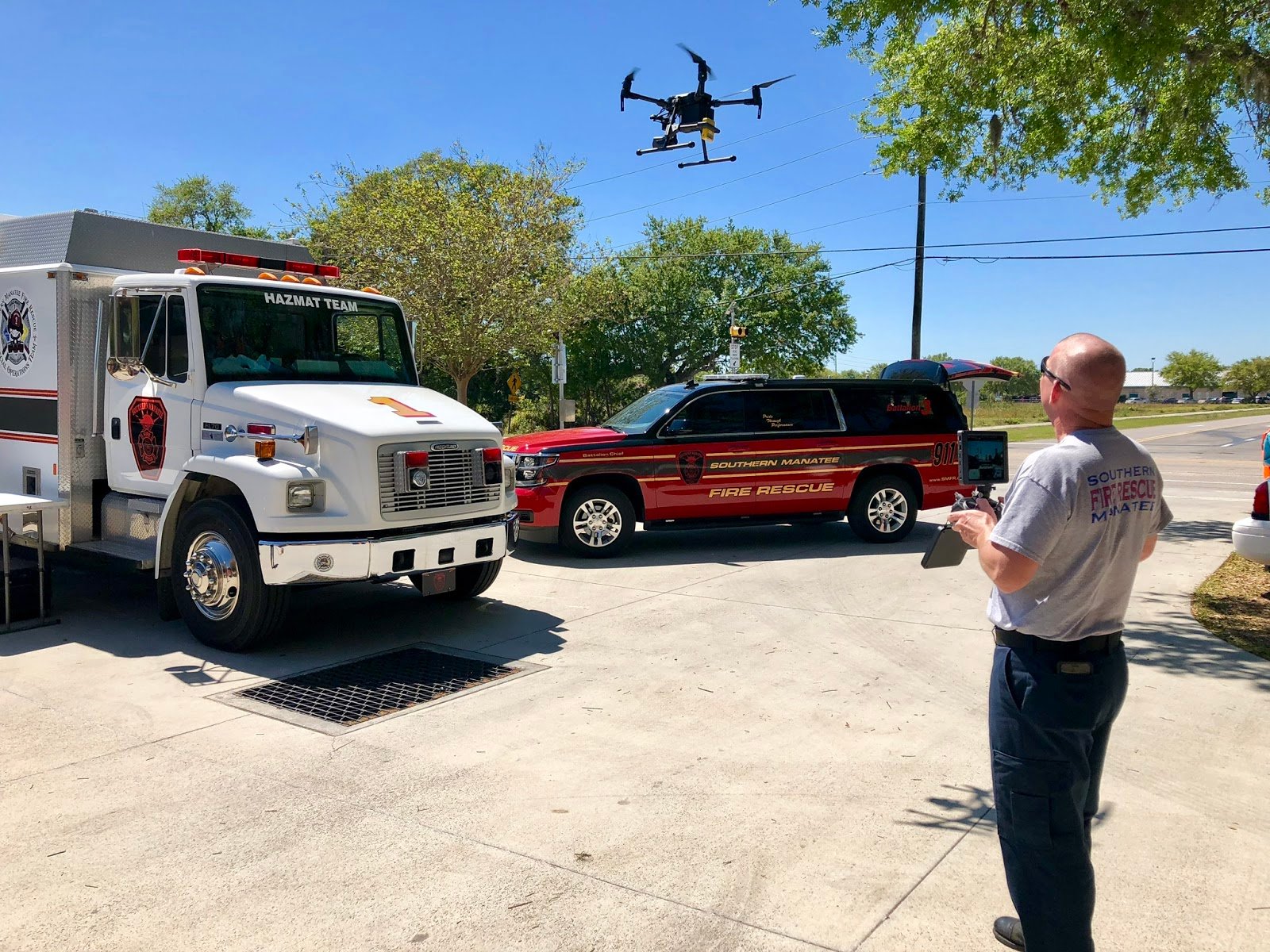 “Drone decontamination is a crucial part of our UAS operations during HazMat incidents,” says Gatanis. “The ability to decontaminate a drone is key to us putting these systems back into service after a potential exposure.  So we developed a ‘Drone Decon’ solution that does just that.”

As the pandemic evolves (as we witnessed in China) so too will new and unique uses for drones.

DJI’s program beefed up Rich Gatanis’s fleet (DJI M210, M200, Mavic Enterprise Dual) with three additional Mavic 2 Zooms. Gatanis believes, among other uses, these UAS could be put to use to document a homeless population that is living outside urban environs and at greater risk for COVD19.

“Our homeless population is typically found out in the woods in secluded areas that are difficult to reach,” he says. Drones could be used for monitoring, or to help “if there was an event, we could communicate with these people quickly and efficiently using these systems.”

Gatanis, as a firefighter/EMT, appreciates the importance of quality tools. He’s aware of the US government’s concern over technology – like drones – manufactured outside of the United States. On this issue, he has some thoughts:

“Currently, There’s not a lot out there that can compare with it [DJI Enterprise products],” he says. “Everything that we need, from reliability to price point to quality to how quickly I can get parts – there’s no comparison. Data security is not a huge issue for our agency, at least when it comes to our aircraft touching a network that could potentially be unsecure. Our biggest data issue comes after the imagery is captured and the imagery becomes part of a larger investigation. Besides that, all of our imagery is treated like any other public document. It can be obtained through public document request.”

Romeo Durscher, meanwhile, knows that COVID19 will prove a key period in the evolution of the utility of drones. He’s proud to document this, and be part of a program distributing much-needed tools.

“There are so many use-cases that we never, ever thought of,” he says.

“So, to me, just in the first few weeks, this Disaster Relief program has been extremely successful. It makes sense, and it’s doing what it’s supposed to do.”

In a situation like this, you simply cannot ask for more than that.

About the Author Scott Simmie

Coastal erosion has become an increasingly severe problem in much of the United States. An analysis by the nonprofit research group Climate Central estimates that rising sea levels could wipe out...
END_OF_DOCUMENT_TOKEN_TO_BE_REPLACED

Energy is the essential ingredient of human evolution. It powers economies and sustains life as we know it. And yet our relationship with this precious commodity is at a turning point.
END_OF_DOCUMENT_TOKEN_TO_BE_REPLACED

When Alex Nunez left his native Venezuela for Miami in 2015 to be closer to his sister – and open the next chapter of life in a new city and country – the trained engineer decided to broaden his...
END_OF_DOCUMENT_TOKEN_TO_BE_REPLACED

In many parts of the world, where ships are used to import oil and gas products, refineries and storage terminals are typically located near navigable waters. Transfer between a moored ship and an...
END_OF_DOCUMENT_TOKEN_TO_BE_REPLACED