Extreme Flying Conditions in the Harsh Home of Polar Bears

Picture this: You’re on rugged, remote Wrangel Island located in the Chukchi Sea and above 71° latitude. It’s north of Siberia and just south of the Arctic Ocean. Basically, go to northern Alaska and hang a sharp left.

You’re with a few other scientific researchers. The only other people on this foreboding 7600 square kilometer (2900 square miles) expanse are a handful of Rangers who live here to protect this vast Wrangel Island Nature Reserve. Mammoths once roamed this land, which remains a vast and starkly beautiful wilderness and a UNESCO-designated World Heritage site.

It’s also winter and freezing out, with the temperature at -27 C (-17 F). The wind isn’t so bad today, but conditions at ground level can fool you. You just got off a snowmobile and are setting up your drone for a scientific mission. You remove your outer gloves to reveal a second, thinner pair used to operate mobile devices – and feel that chill creeping into your fingertips, threatening to turn them numb. 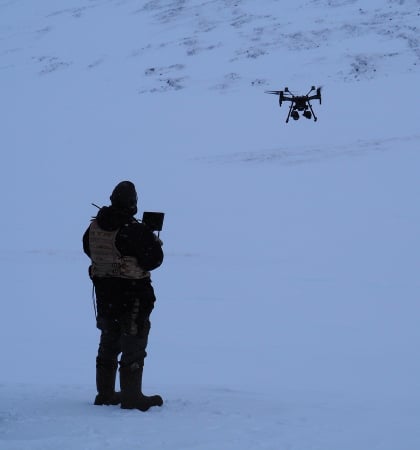 In the back of your mind, you wonder how the batteries will perform in these extremes. You’re also hoping the weather doesn’t shift, as it can quickly do in these parts. You power up the remote controller and the vehicle, check that your observer has a pair of binoculars at the ready, and fire up the props. The drone lifts off and your mission begins.

With luck, and a thermal sensor, you might soon spot the dens of polar bears.

Those bears are the reason a group of researchers has brought themselves, along with two DJI Matrice M210s and two Mavic 2 Enterprise drones, to this location. It has the highest density of polar bear dens of anywhere on the planet. (That’s also why the few buildings on this island have protruding spikes from all windows; to keep hungry bears from breaking in and consuming the visitors.)

It’s the dens these researchers are particularly interested in observing, and they’re hoping drone technology will help them identify those locations from the air.

“The islands of Wrangel and Herald are not called the ‘maternity home of polar bears’ by accident. This is where the majority of pregnant females of the Chukotka-Alaskan polar bear population lie in dens every year,” Mikhail Stishov, World Wildlife Fund-Russia project coordinator for Arctic biodiversity conservation told the WWF.

Surveying these areas has traditionally involved aerial inspection by helicopter. Those expensive flights have been supplemented by regular snowmobile treks, with researchers trying to spot dens with the naked eye or binoculars. But trying to spot a one-meter hole – or even the bears and cubs themselves – on these snow-covered slopes can prove difficult: Everything is white. To complicate matters, the dens tend to be located on upper slopes, which the afternoon sun turns into a blinding mirror. 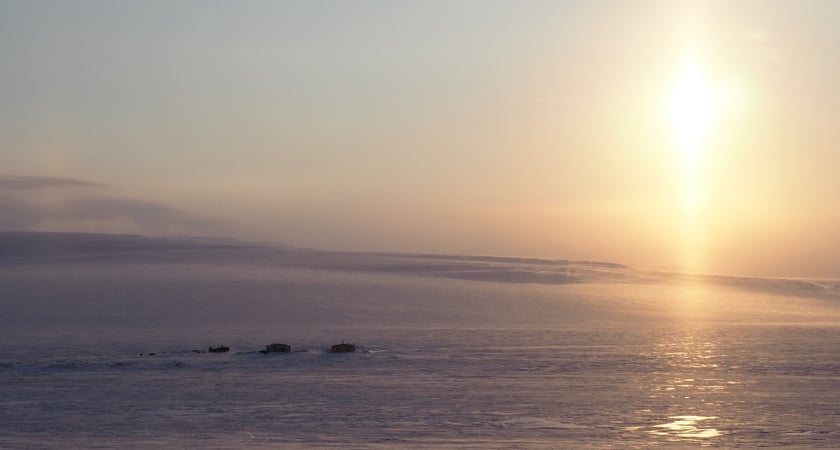 Remote housing of the researchers

Wildlife conservationists are interested both because polar bears are listed as “vulnerable” on the endangered species list – and because climate change has led to reductions on sea ice in the region, which could further impact them as a species.

“Warming is impacting the island itself as open seas make it a wetter place and warmer temperatures melt the permafrost,” writes Geoff York, Senior Director of Conservation with Polar Bears International.

So scientists are interested in closely monitoring polar bears and their offspring to see if and how these variables are impacting the population.

“Understanding the importance of this territory, we readily supported a new research project,” says WWF’s Stishov. “WWF provided the reserve with four professional quadcopters, two with thermal imagers. And at the end of last year, with our support, nature reserve staff took drone control courses.”

Those courses – and the drones – came from Russian drone retailer and service provider SKYMEC, which provided the training in February of 2020.

“The task set by the nature reserve specialists was to select equipment and improve the aerial surveillance method for evaluating and studying the polar bear population with the latest drone systems,” explains Anton Larsen, SKYMEC’s Head of Enterprise Sales.

“The main criteria was to watch the wildlife without disturbing the animals. The nature reserve policy emphasizes not interfering with wildlife or natural processes.” 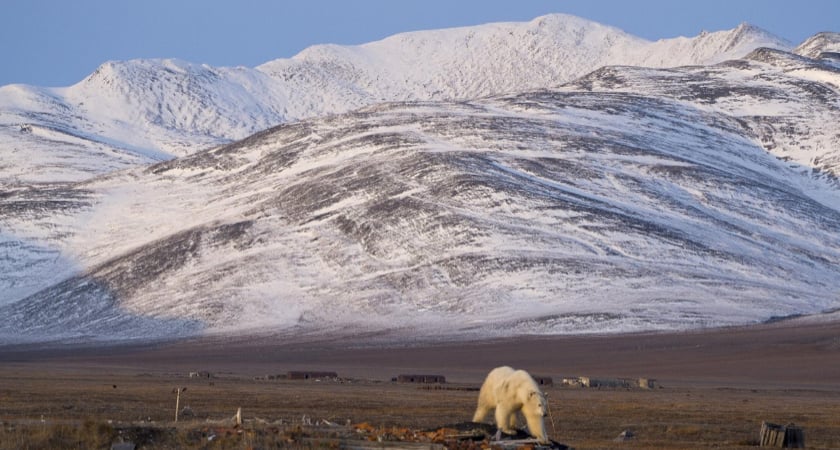 Wrangel Island is not a hospitable place, at least not for people or drones. SKYMEC says the location poses clear challenges.

“The work conditions for the crews and DJI drones was very complex,” explains SKYMEC’s Larsen. “The island has a harsh Arctic environment. Cold masses of Arctic air with low moisture content move over the flight area most of the year. The island is famous for its frosty weather, frequent snowstorms, strong northerly winds and complete darkness during the polar night.”

Not much to do about that; the work needs to be carried out in winter:

“The staff takes a census of polar bears in March and April, when the female bears and their offspring leave the lairs and take the cubs to the sea ice, where they teach them to survive and hunt seals,” he says.

Drones, at least in theory, would allow researchers to safely try to locate dens on those snowy slopes. And they would assist by using thermal imaging: The dens, warmed by body heat, tend to be 10-15° C warmer than the ambient temperature. That would allow researchers to spot them more easily than by eye, where the small one-meter holes leading to the den can blend in with the rest of the snow.

This image, captured with a standard camera on the drones, gives you an idea: 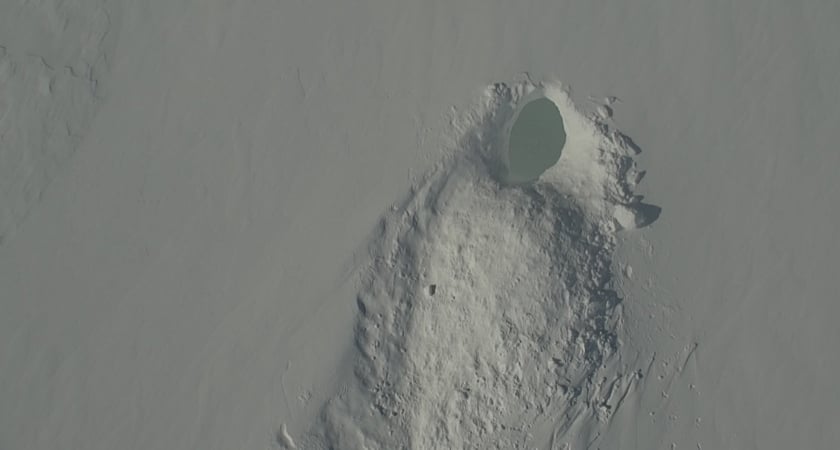 Depending on lighting, this wouldn’t necessarily jump out at you.
(Photo: Wrangel Island Nature Reserve / WWF-Russia)

Contrast that to the same scene as captured with a FLIR thermal sensor on a DJI drone: 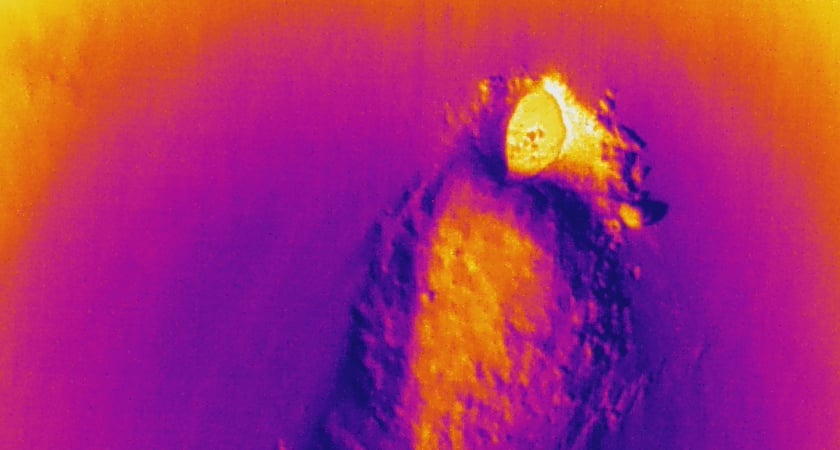 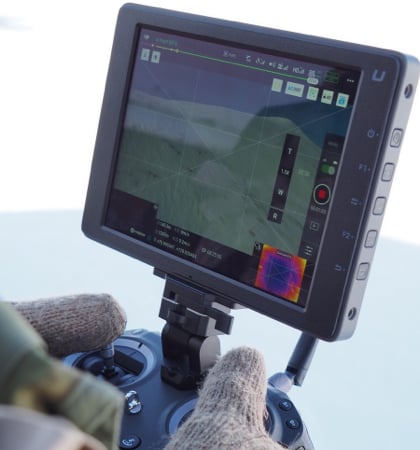 Both the Matrice M210 RTK and the Mavic 2 Enterprise were flown during the researcher's field trips. And, as SKYMEC predicted, the conditions proved challenging. Snowstorms can pop up at the drop of a toque, causing icing on drones. And while the M210 RTK can handle extreme conditions, even it is subject to the laws of physics.

“We tried not to start the drones in snowfall,” says Gennady Federov, Deputy Chief State Inspector for Environmental Protection for the Wrangel Island Nature Reserve. “But it so happened the weather changed during the flight. So we flew, yes in snowfall conditions...the gimbal (on the M210) froze and the camera got covered with frost.”

There were two research teams of four, and eight missions were carried out over a two-day period using dual controls on each (one person operating the camera). On more than one of those flights, wind conditions changed drastically at altitude.

“We always tried, of course, to fly at a time of minimum wind conditions,” says Federov. “But almost always the onboard computer of the quadcopter diagnosed a strong wind speed at altitude.” Flights were typically heading out one kilometer at an altitude of 100 meters AGL, monitored by a colleague with binoculars. GPS connection was not always reliable on the island, so the team wanted to maintain Visual Line of Sight (and be following regulations, though the odds of unexpected low-flying aircraft were pretty much zero).

Every Enterprise mission is different, and some jobs would absolutely require the capabilities of the M210 RTK. But tracking polar bear dens wasn’t one of them. Federov says he was incredibly pleased with what the Mavic 2 Enterprise was able to achieve.

“Personally, I was very impressed by the Mavic 2 Enterprise. For our work, the Mavic could cope with almost all the tasks set by us. Despite its smaller size and weight, it’s very stable and capable of withstanding gusts of wind. The battery capacity in relation to the size and weight is simply outstanding. And it’s easily transported in a belt- or shoulder-bag.” 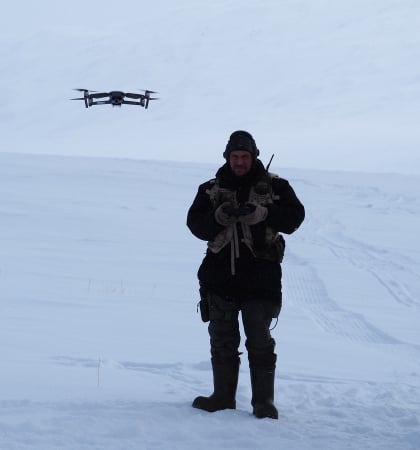 The Mavic 2 Enterprise Zoom proved up to the task.

Well, the team did fly over a den it had located visually and was able to confirm the usefulness of the thermal imagery, as illustrated in the photos previously displayed. The drones were also able to maintain a distance that didn’t disturb the bears while capturing photos that offered insight into the health of this mother and her cubs, partly due to the 30x zoom capability of the Zenmuse Z30. 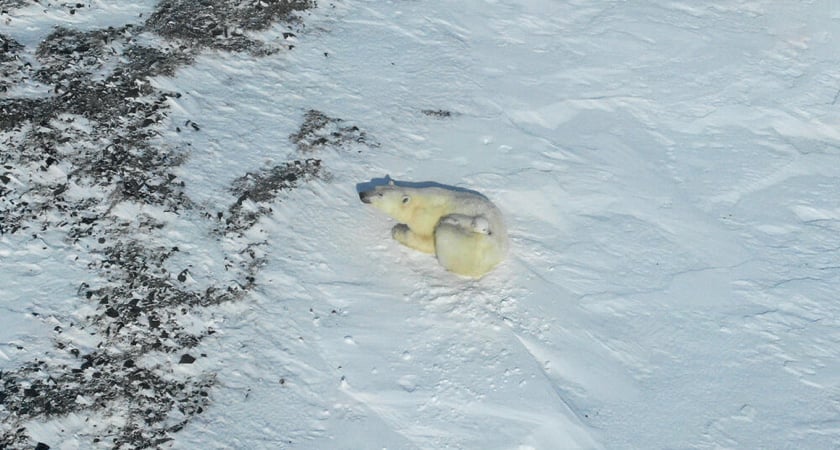 The drones were able to confirm that a den was occupied and gather photos of the mother bear and cubs. But with complications due to weather, including sudden snowstorms during flight, the team did not discover previously undetected dens using thermal as hoped. But researchers stress many lessons were learned and they’re optimistic about using drones the next time around.

“We gained valuable experience and learned from our mistakes, which will allow for a detailed analysis and preparation for next year’s census. The resulting photo and video material is of great scientific value and with its help, specialists will understand the age and condition of the animals, and the distinctive features of their behavior,” Leonid Zaika, head of the Department of Ecotourism Development of the Wrangel Island Nature Reserve told the World Wildlife Fund.

“Most importantly, we understood that the use of drones in polar bear monitoring makes it safer and greatly facilitates the search and study of both the dens and the animals.”

And so? Like the bears, the researchers will return once again. They’ll bundle up in extreme-weather clothing, pack up their gear, and head out to fly.

And, with a combination of skill and technology and luck...locate those elusive, important, holes in the snow. 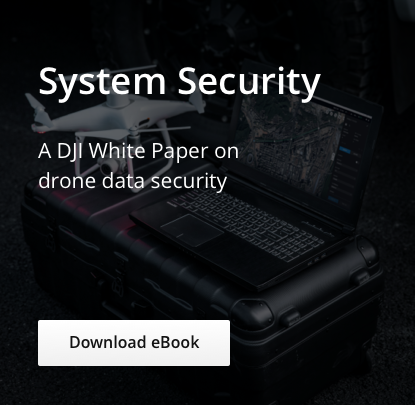 Counting Penguins at the South Pole: The Power of Precision Data
in User Stories

Coastal erosion has become an increasingly severe problem in much of the United States. An analysis by the nonprofit research group Climate Central estimates that rising sea levels could wipe out...
END_OF_DOCUMENT_TOKEN_TO_BE_REPLACED

Energy is the essential ingredient of human evolution. It powers economies and sustains life as we know it. And yet our relationship with this precious commodity is at a turning point.
END_OF_DOCUMENT_TOKEN_TO_BE_REPLACED

When Alex Nunez left his native Venezuela for Miami in 2015 to be closer to his sister – and open the next chapter of life in a new city and country – the trained engineer decided to broaden his...
END_OF_DOCUMENT_TOKEN_TO_BE_REPLACED

In many parts of the world, where ships are used to import oil and gas products, refineries and storage terminals are typically located near navigable waters. Transfer between a moored ship and an...
END_OF_DOCUMENT_TOKEN_TO_BE_REPLACED