Drone Surveying: What is the Difference Between Aerial Photography and Photogrammetry?

Why aerial photogrammetry is the proper technique for surveying jobs

Even the most novice user knows that drones can be used to take photographs. The accessibility of drone aerial photography has led to their use across multiple sectors and produced some incredible images. But is it good enough for your next mapping or surveying job?

The truth is that aerial photographs on their own can not be depended on to provide the kind of perspective-free, measurable digital images needed for surveying. For that, you’ll need photogrammetry.

What is aerial photography?

Aerial photography describes any photographic image taken with an airborne device. In addition to Unmanned Aerial Vehicles, or UAVs, such as drones, aerial photographs can be captured from a plane or a helicopter. Aerial images are one of the more common forms of remote sensing, or the measurement of the characteristics of a place from a distance, according to the United States Geological Survey.

Photographic images tend to be amongst the most user-friendly ways to share data and have practical applications in multiple industries. They are, however, not very accurate without being placed in a photogrammetry model and are not recommended for surveying jobs.

While the definition of aerial photography is broad, images tend to fit into either a vertical or an oblique category, according to EnvironmentalScience.org. 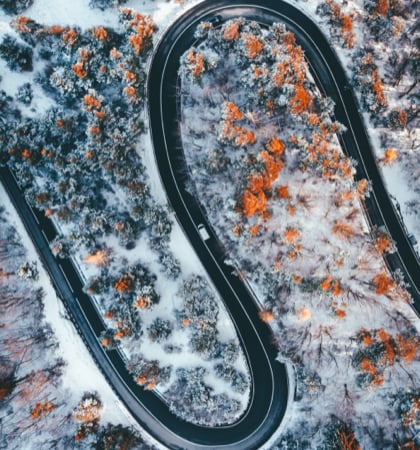 Oblique photographs, meanwhile, are manually taken at an angle, often around 45 degrees but customizable depending on the feature. Because they don’t offer a straight down perspective, oblique photographs are usually only taken from lower elevations, limiting their use in larger surveying projects and ultimately making them best only for uniquely shaped features that can’t be accurately captured with a vertical image. Some of their most common uses of oblique photographs include archeology and in some environmental science projects. 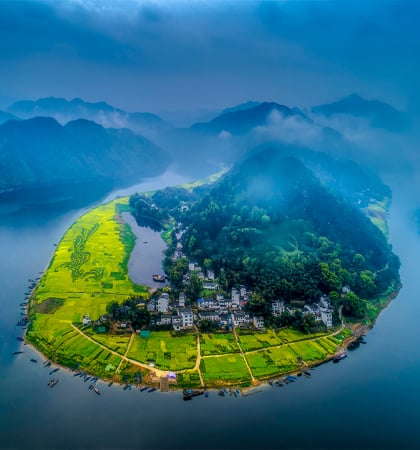 Notably, aerial photography is also different from satellite imagery, even though the terms are sometimes conflated. Aerial photographs can be taken by many types of devices, including drones, and at any height in the air. For a photograph to be considered a satellite image, it must come from a device that is orbiting the earth. As a result, satellite images are used only sparingly in the private sector and are most common for scientific research and monitoring the weather.

While both aerial photography and satellite imagery are considered forms of remote sensing, satellites have several additional uses thanks to their unique placement far above the planet, such as identifying temperature changes. Of course, satellite images also have limited practical use for projects that are focused on a smaller area or require extremely detailed imaging. 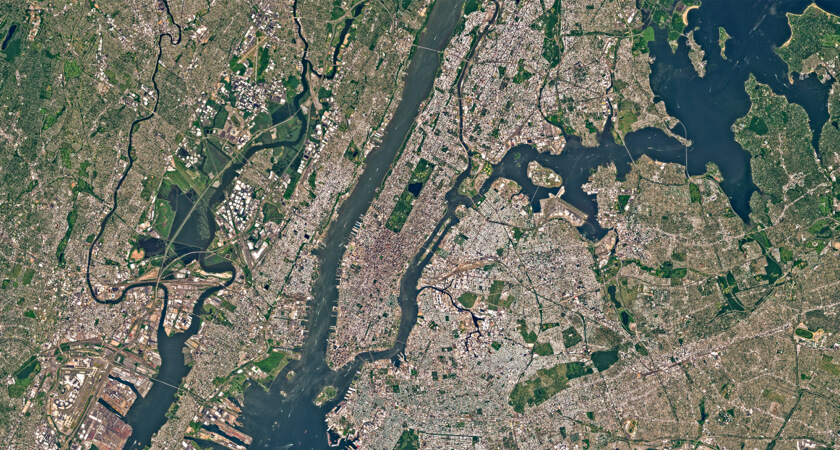 Aerial photographs have long been an instrumental part of many forms of scientific research, and their commercial applications have increased with advancing technology and lower prices on high-quality cameras and UAVs. However, the medium’s limitations have made it impractical to use for surveying purposes.

To make survey-ready maps, you’ll need to add capabilities offered by photogrammetry, or another form of data sensor, such as LiDAR or multispectral. 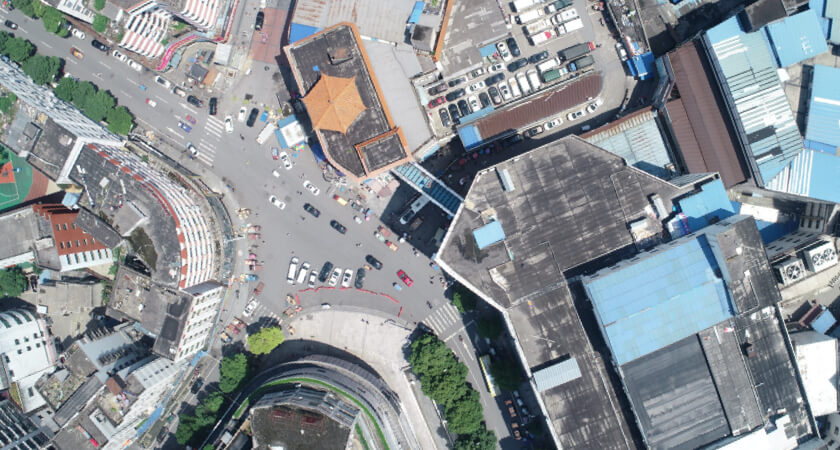 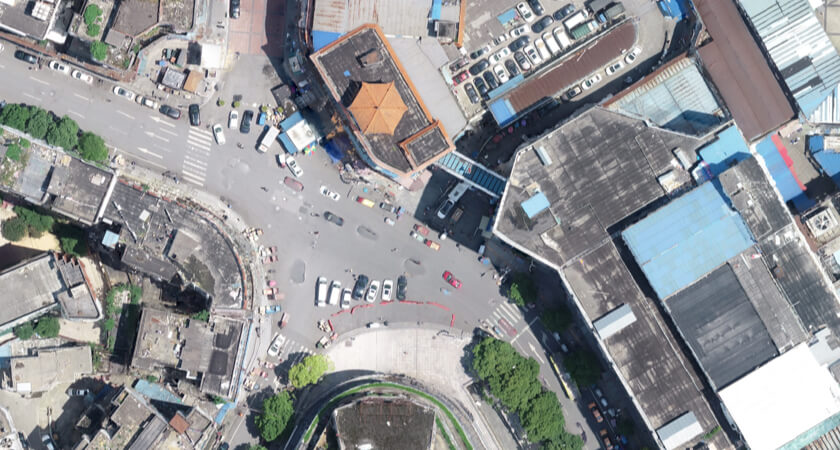 What is aerial photogrammetry?

While aerial photography can be used to take nice overhead images and get a general sense of an area, it lacks the precision necessary for most surveying jobs and doesn’t show topography. For that, you’ll need photogrammetry.

Photogrammetry involves taking multiple images of a feature and using them to create digitized high resolution 2D or 3D models from which accurate measurements can be deduced. Depending on the scope of the project, a model made with photogrammetry may require anywhere from a couple hundred to several thousand separate images. 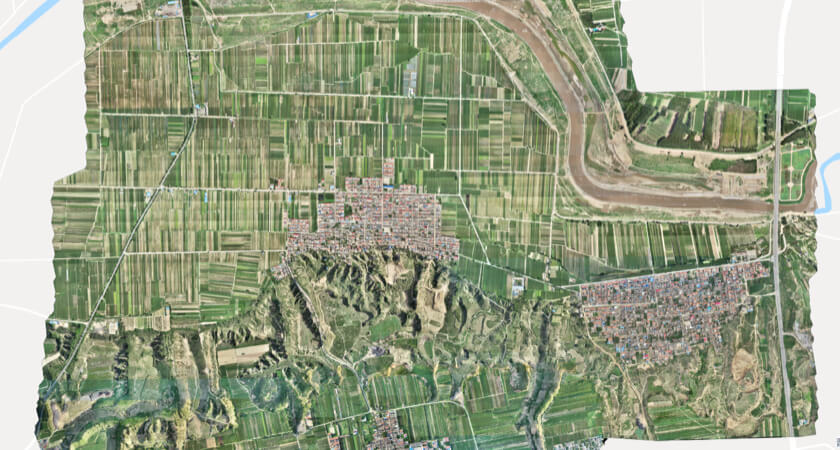 The basic principles of photogrammetry, such as using multiple perspectives or ‘lines of sight’ to place coordinates, were first developed over 150 years ago, according to GIS Lounge. However, the modeling form has reached new levels of accessibility and use with digital imaging and aerial technology like drones. Previous to the advent of aerial photography, surveyors used equipment like magnetic compasses, barometers, drawing tables and tape to determine topography, according to Penn State University.

Today, photogrammetry can be conducted with a mix of devices, including drones, planes and helicopters. However, thanks to technological advances and a lower price point, drones have emerged as the equipment of choice for many surveyors.

Although photogrammetry may add capabilities, it’s only necessary for some jobs. Some common areas of use, according to GIS Resources, include: 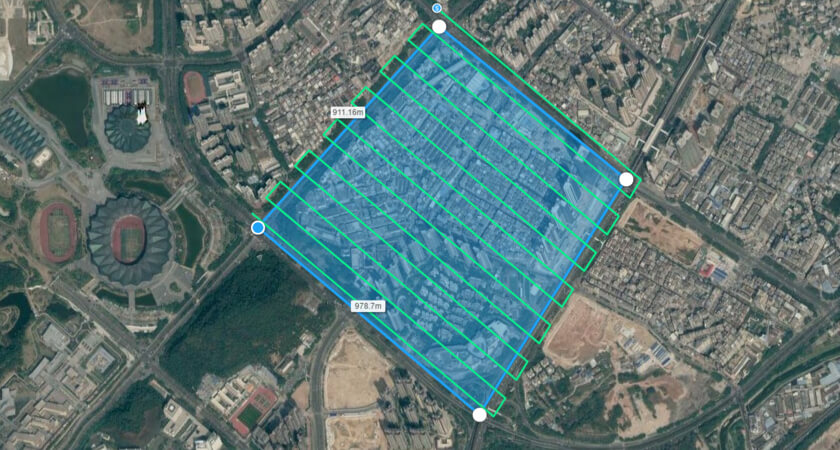 Ultimately, aerial photogrammetry is advantageous for surveyors, compared to terrestrial techniques, no matter their industry. Aerial photogrammetry provides more data in less time and allows surveyors to steer clear of dangerous areas while still collecting the information they need. The result is often improved savings for companies. In addition, because photogrammetry depends on digital images, it can be used to create 3D models that are realistic and easily recognizable for easy use with a variety of stakeholders.

It’s important to note that photogrammetry is different from LiDAR, or light detection ranging. While photogrammetry relies on identifying coordinates to craft an accurate 3D image, LiDAR builds topography by measuring the amount of time a light wave takes to reflect off the ground and back to a drone. This surveying technique is incredibly accurate, but also expensive. Not only is equipment costly but it's also bulky, meaning drones must be bigger.

Whether photogrammetry or LiDAR makes sense for you is dependent on the project. LiDAR is ideal for work sites with inconsistent lighting that could affect the quality of a photographic image. Surveyors working in an area with high vegetation coverage may also prefer LiDAR because it penetrates leaves, branches and trees. Other uses may include projects reliant on ultra-thin features, such as power lines. Ultimately, however, both techniques can be used to build functional, easily applicable 3D models.

To properly scale an aerial photograph, and use it for photogrammetry modeling, you’ll need to calculate the ground sample distance of the image, or GSD for short. GSD describes the real distance between the centers of two consecutive pixels in an image. In other words, if the GSD is calculated as being one meter, this means that every pixel on a map is representative of that distance. Both aerial photographs and photogrammetry require an accurate GSD, since these photogrammetry maps are also made from multiple digital images.

The GSD you’ll need depends on the scope of the surveying job. projects with a larger scale will require a higher GSD, which means the overall map is less detailed, while projects focused on a smaller piece of land will use a lower GSD. Many surveyors, according to Aerial Survey Base, will select both a target and a minimum GSD. This will allow for the use of images with slight variations in GSD, which happens because of variations in terrain. While allowing a wide range between the target and the minimum can allow for more images to be used, as is especially common for aerial photogrammetry, it does require more computing abilities because of the data involved.

To calculate GSD, you’ll need to know your drone’s:

Each of these numbers should be easy to find, depending on your brand of drone. From there, the GSD can be found with either an online calculator or by plugging numbers into an equation.

How do drones support aerial photogrammetry?

Utilizing drone photogrammetry can save time and money compared to classical terrestrial surveying techniques. That means mapping drones are a worthwhile investment for both surveyors and the people who hire them. For a drone to be photogrammetry-capable, it must also be able to take aerial photographs, as photographic images are the basis of the technique.

If you need next-generation mapping, look no further than the Matrice 300 RTK. This drone combines smarts with performance, including six directional sensing and positioning and the ability to hold up to three payloads simultaneously.

In addition to finding a drone with the right capabilities, surveyors looking to use photogrammetry will also need intuitive drone mapping software, like DJI Terra. Terra is an all-in-one drone mapping solution that stitches images together and makes surveying easier. Whether you need a 2D or 3D map, this software can process your data and render accurate images.

While aerial photography has revolutionized scientific research and mapping, you’ll need to add photogrammetry capabilities to get a survey. Photogrammetry is used to create accurate 2D and 3D models with precise coordinates. With an understanding of the technique and drones and software from DJI, no job is too great a challenge.

With the rise of large commercial buildings across the US, the demand for safe and effective inspection of rooftops has been growing substantially.
END_OF_DOCUMENT_TOKEN_TO_BE_REPLACED

We are now inching toward a place in time where most people begin to wonder: why did I make that New Year’s resolution? Well, we may not be able to help you out much in your pursuit of a “newer,...
END_OF_DOCUMENT_TOKEN_TO_BE_REPLACED

For most households, energy bills are a consistent and expensive outgoing. These costs peak during the winter months when the cold arrives. The U.S. Energy Information Administration predicted that...
END_OF_DOCUMENT_TOKEN_TO_BE_REPLACED

Delivery drones could very well be The Next Big Thing for businesses to deliver goods to their customers. They can also be extremely helpful in transporting sensitive items such as medical supplies...
END_OF_DOCUMENT_TOKEN_TO_BE_REPLACED