The DJI Dock & The Evolution of UAS Programs

How the DJI Dock can shift workflows from automated to autonomous

In more than a decade at the forefront of drone technology, DJI has inspired drone programs worldwide and pushed the industry forward. From the original Phantom series to today’s suite of enterprise platforms, exploring the future of possible wouldn’t be possible without DJI’s relentless hardware and software innovation.

The capabilities drones unlock continue to gain momentum and new applications keep on coming. All grounded in the prospect of “What if…?”

What if we use drone photos to build 3D models? What if we make a quadcopter that folds? What if we build tools to assist first responders during emergency response, or put thermal, multispectral, and LiDAR payloads in the hands of anyone gathering data from above?

DJI’s enterprise platforms continue to transform workflows. From agricultural surveys to industrial inspections, flying robots are carrying out potentially hazardous tasks faster, better, and more efficiently than before. As things stand, the enterprise fleet is made up of: 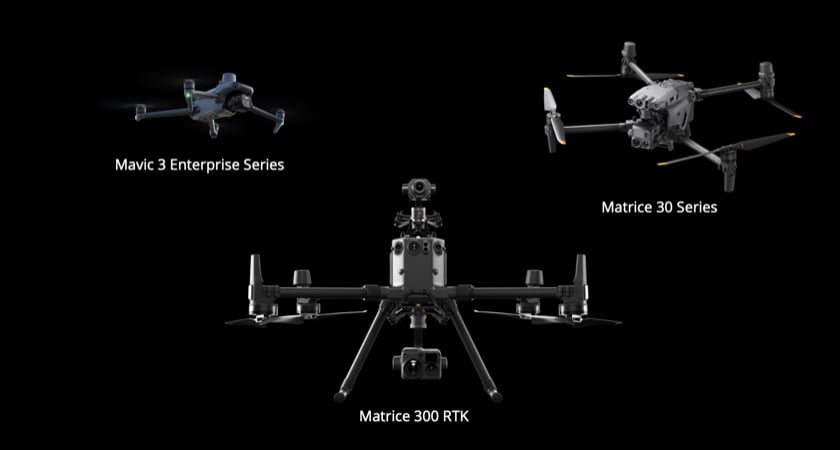 But following in that spirit of “What if…?”, something new is on the horizon for 2023: The DJI Dock.

During an AirWorks 2022 keynote featuring DJI’s Head of Enterprise Solution Engineering, Grant Hosticka, DroneDeploy’s VP of Product James Pipe, and Senior Manager of UAS at BNSF, Nick Dryer, attendees got an overview of the Dock, reports on real-world testing, and a glimpse of how transformative DJI’s first drone-in-a-box solution could be.

How the DJI Dock can shift workflows from automated to autonomous

First up was DroneDeploy VP of Product, James Pipe, who outlined the company’s goal to evolve from automated site processes to those that are smarter and more autonomous. DroneDeploy’s push for greater autonomy has already had success on the ground, integrating robots like Boston Dynamic’s Spot into smoother workflows. That concept is set to take to the skies with the DJI Dock.

“Our goal is a complete autonomous workflow. You shouldn’t need to worry about the drone at all. It just does its work and captures the data.” - James Pipe, VP of Product at DroneDeploy 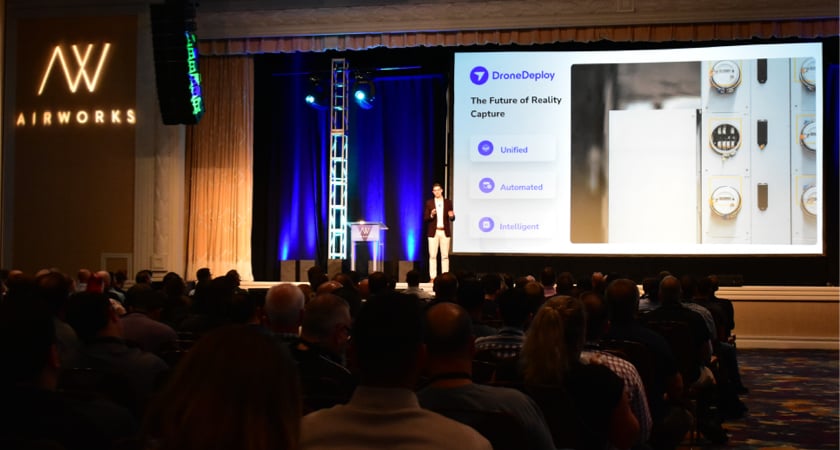 To put the Dock through its paces, DroneDeploy enlisted the help of BNSF - one of North America’s largest freight railroad companies. BNSF has one of the world’s leading drone programs, with several groundbreaking waivers from the FAA for BVLOS flights and remote operations. BNSF also has the kind of remote locations that would benefit from a drone/dock solution, with miles of rural tracks to maintain, busy rail yards, and sites under construction.

BNSF’s Senior Manager of UAS, Nick Dryer, outlined a few instances in which the DJI Dock could be a game-changer.

“We don’t want to wait hours to get data. We want it instantly. The drone in a box concept fits that bill…it’s the instant gratification of information.” - Nick Dryer, Senior Manager of UAS, BNSF 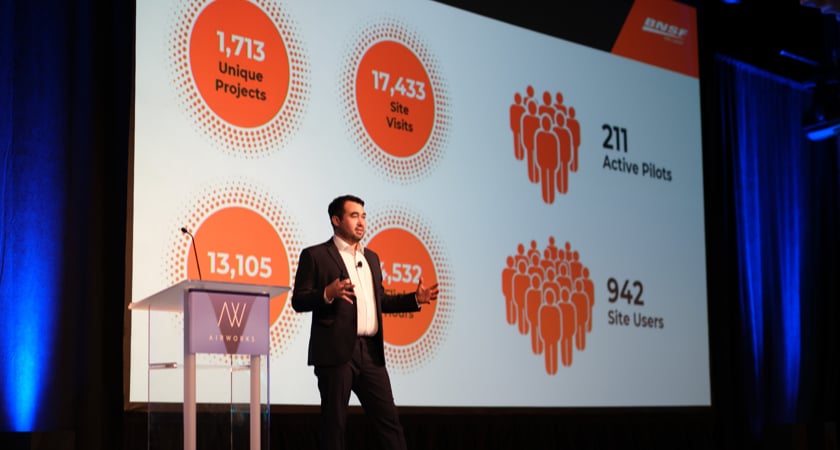 The first DJI Dock application BNSF envisage is a form of rapid response. The company manages miles of tracks in the Pacific Northwest, including stretches along the Columbia River that are prone to rock falls. Anytime a rock bigger than a baseball comes loose, it hits a fence that sends an alert to train crews entering the area. Once this system is triggered, trains passing through have to slow from 40-50 mph down to walking pace. It’s usually miles before the next signal and clear tracks. That equates to hours and hours of delays across the network.

With a drone-in-a-box system, Dryer believes the same alert could be sent directly to the DJI Dock. The M30 Dock Edition could carry out a quick traversal of the stretch in question, gather data that’s analyzed either by AI or a remote pilot, and give the all-clear. Or it could provide details of exactly what and where the obstacle is so that work to remove it can get underway sooner.

The second potential application is stockpile monitoring. BNSF has stockpile facilities across the country where industrial materials are stored and prepared for transportation. At the moment, drones are already used regularly at these locations to map stockpile data. With the DJI Dock permanently at these facilities, precision information could be gathered and provided to BNSF customers in a completely autonomous fashion.

Last but not least, Dryer discusses how autonomous drones could transform rail yard efficiency. He gives the example of a rail yard with 2,000 rail cars arriving each day. Generally, BSNF does a great job of tracking cargo and organizing which track each car is placed on. But even with 99.5% accuracy, 10 rail cars are lost in the crowd. This means supervisors are roaming around looking for missing cars for up four hours every day. With the DJI Dock, railyard teams automate the process of finding lost cars, turning the current four-hour manual search into a quick CTRL+F.

First impressions of the DJI Dock at AirWorks 2022

The Mirage Hotel & Casino Convention Center in Las Vegas isn’t quite the remote location the DJI Dock has been built to service. But for the duration of AirWorks 2022, it was the setting for its public U.S debut - and one of the most popular exhibits across the conference. 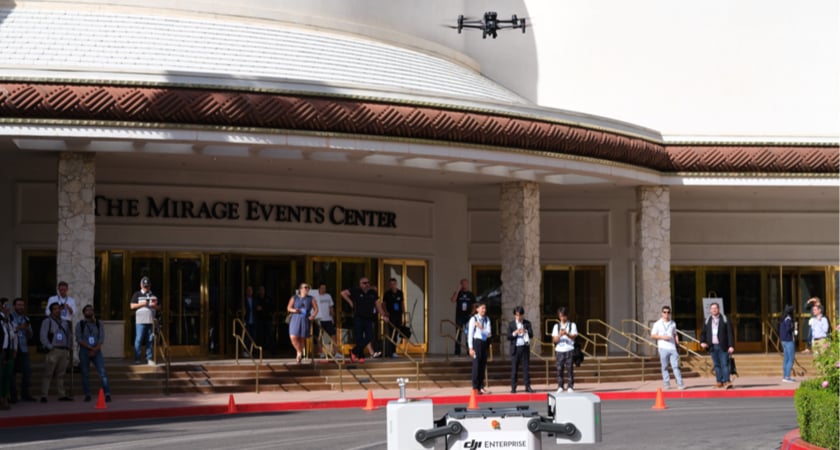 Taking attendees through live demonstrations was Grant Hosticka, Head of Enterprise Solution Engineering for North America at DJI. Grant was on hand to talk through the system as it went through the landing, recharge, and take-off cycle.

That started with a quick explainer of the Dock Version of the Matrice 30, which is the same as the standard M30 aside from one crucial difference: the aircraft has charging points on the bottom of its legs that replace the need for manual battery swaps. As the drone lands, the front, back, and sides of the Dock’s platform adjust to make sure the aircraft is perfectly centered. The roof then folds over to provide IP55-rated protection and air conditioning to maintain an ideal temperature for charging. 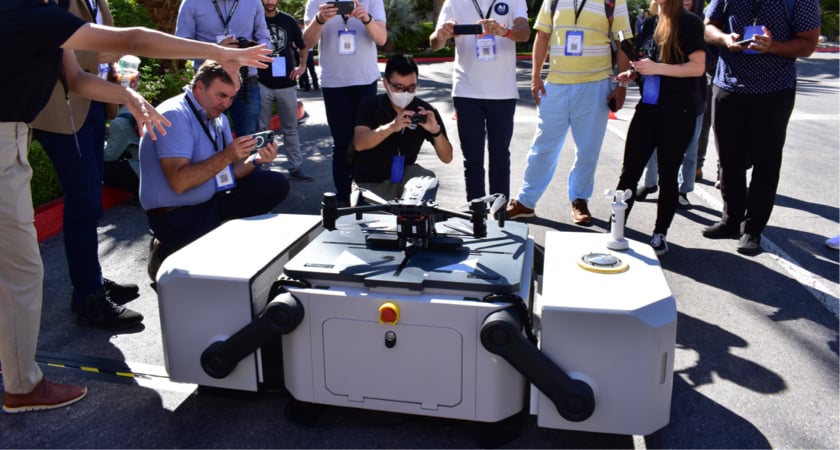 Attendees also got a first look at how workflows and flight plans are created through the DJI FlightHub 2 app. With its intuitive interface, remote pilots can deploy the drone with ease and start building autonomous data missions.

To read more about the DJI Dock, click here.

With the rise of large commercial buildings across the US, the demand for safe and effective inspection of rooftops has been growing substantially.
END_OF_DOCUMENT_TOKEN_TO_BE_REPLACED

We are now inching toward a place in time where most people begin to wonder: why did I make that New Year’s resolution? Well, we may not be able to help you out much in your pursuit of a “newer,...
END_OF_DOCUMENT_TOKEN_TO_BE_REPLACED

For most households, energy bills are a consistent and expensive outgoing. These costs peak during the winter months when the cold arrives. The U.S. Energy Information Administration predicted that...
END_OF_DOCUMENT_TOKEN_TO_BE_REPLACED

Delivery drones could very well be The Next Big Thing for businesses to deliver goods to their customers. They can also be extremely helpful in transporting sensitive items such as medical supplies...
END_OF_DOCUMENT_TOKEN_TO_BE_REPLACED