New firmware versions for the M300 RTK, the H20 Series, the Smart Controller Enterprise, and more

The latest firmware of the Matrice 300 RTK and H20 Series has been released and we are excited to share with you some of the improvements and new features that are being introduced. From a new “LookAt” feature for the H20 Series to 3rd party tablet support, this article covers everything you need to know about the new updates.

Please see videos here in regards to updating your system:

New Features Introduction in U2 Version 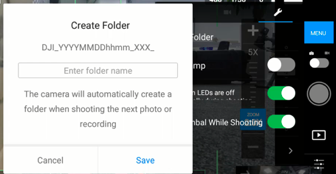 In camera settings you can now create a folder and also customize its name. This folder will be used until the drone is powered off or a new folder is created.

You can now enable the timestamp function, customize the content of the timestamp, and also select its location.

This feature is designed to prevent the thermal sensor from being damaged by strong sunlight. When it’s switched on, the infrared shutter will be automatically closed when strong sunlight is detected by the camera. 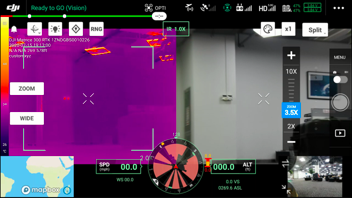 You can set the scene mode to be manual/default/inspection for the thermal camera. In manual mode you can configure the DDE, contrast, and brightness. In inspection mode these parameters are set for powerline inspection scenarios. 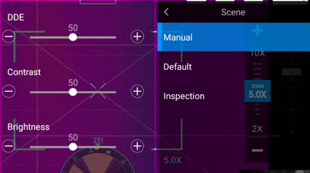 8) Laser rangefinder can be disabled now 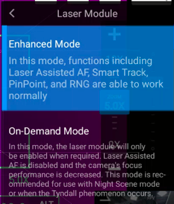 When the aircraft is in the air, if the GPS module has a malfunction and the visual system is not in effect, the aircraft will automatically use the single point position data from the RTK module for positioning, to avoid the risk of entering ATTI mode unexpectedly.

A connection to a D-RTK 2 mobile station/Ntrip service is not required for this feature to work because RTK is working as a backup GPS in this case.

The controllability during the three-propeller emergency landing is improved.

Maximum descend speed in P mode has been increased from 3 m/s to 4 m/s.

RC will vibrate when the RTK/GPS signal is lost, or the visual system is no longer being used during the flight.

Generally speaking other newer Samsung S tablets should work with the system as well but may have some display issues or lack the necessary processing power.

Press and hold the confirm button, then you can adjust the zoom level of the H20 series with the right wheel.

4) Added function to control zoom level with the stick

If the RC only has gimbal control, one stick controls the gimbal movements, and the other controls the zoom level.

7) Added functionality to support the adaptive bit rate for the Video Transmission System of PSDK camera.

The RC that doesn’t have aircraft control can enter the mission flight mode and see the planned flight route on the map so that both pilots know the current status of the mission. 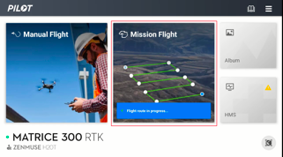 The next two waypoints will be shown as a blue diamond on the screen of the FPV and camera view screen.

The target waypoint height and planned speed can be shown as blue triangles on the Flight Information of Primary Flight Display. 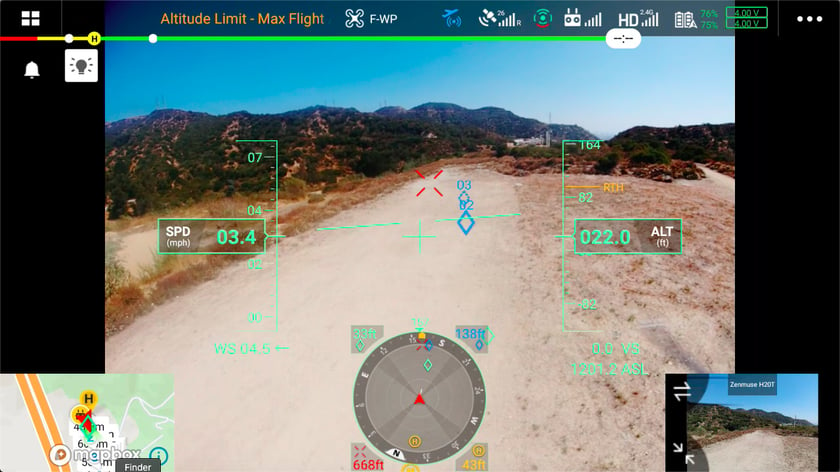 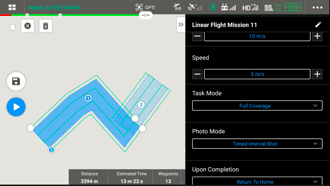 Photo/video documents taken during a flight mission will be automatically saved in a subfolder in the SD card. When you execute a mission, you can customize the subfolder name.

H20 series will not respond to camera related actions from the user during the autonomous mission, in order to ensure the AI Spot-Check accuracy

3) The framing process is optimized: you can now rotate the frame to fit the object shape 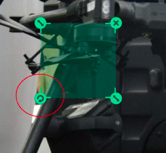 In Smart Track mode, if you are tracking a car, and another car is passing by, sometimes the tracking would jump to the other car by mistake. This issue has been improved in the new firmware.

The recognition for trucks has also been improved in Smart Track.

In the U1 version it was showing ALT (relative altitude to home point), now it’s changed to ASL.

4)  Added support to edit the GPS coordinate on the map in the PinPoint function.

Go into map view, tap on the Pin (or place a pin if there has not been one placed), then click the edit button for the GPS coordinate menu to appear. 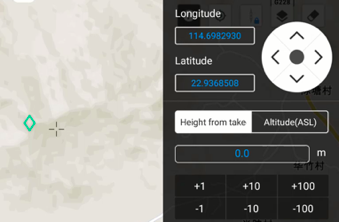 After you have created a Pin on the map or with the laser rangefinder, you may change the aircraft/gimbal direction, then you can click on the Lookat button to regain focus of the Pin point.

Whether the aircraft or the gimbal will turn depends on the gimbal mode and whether the RC has aircraft control. The Blue Lookat button pictured below will appear after a pin has been placed. 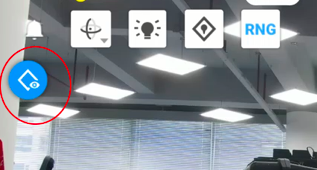 Vertical speed will be shown as a white bar in FPV view and camera view.

In the previous firmware version, wind direction will show the absolute cardinal direction. In the latest version it is changed to the relative direction to the aircraft. 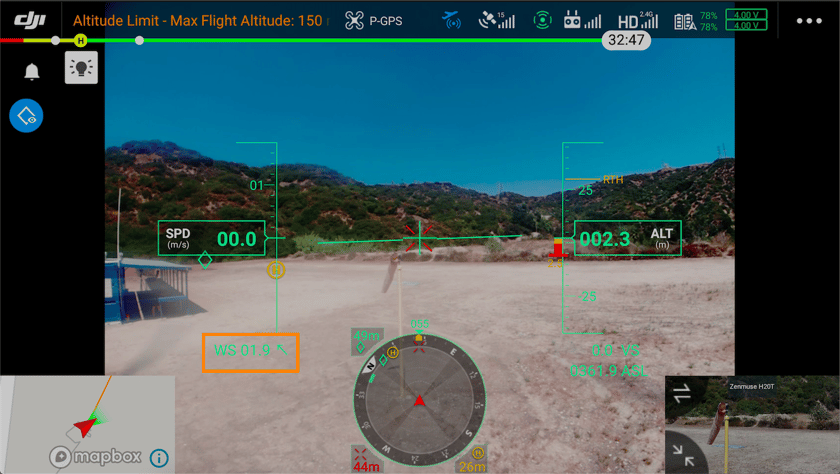 1) Added battery and RTK information in the DJI Pilot checklist.

2) When the discreet mode is turned off, the auxiliary lights will return to Auto mode.

Similar to M2E series, you can change the RC mode configuration from T/P/S to A/P/S in Pilot App. Under A/P/S configuration, you can switch to ATTI mode if you turn the switch to T. 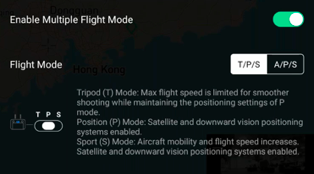 5) Display the GPS coordinate of the aircraft on map view

You can click on the aircraft icon to show/hide it.

You can clear the cache of the Pilot app in Pilot Settings now.

8) Support to set the upward and downward vision system separately

The upward and downward vision system can now be set separately.

In previous versions, even if you disabled the downward vision system, the drone would still stop at the braking distance,

Now if you disable the downward vision system, the drone will not stop when it’s close to the ground, however it will still decrease its speed to avoid hitting the ground sharply. 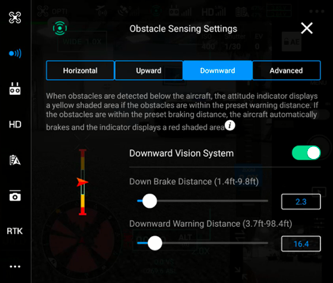 When the Pilot app is connected to M300 RTK, this GIF tutorial will pop up to tell users how to install the frame arms correctly, and you can click to stop it showing again. 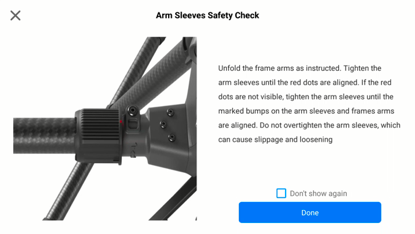 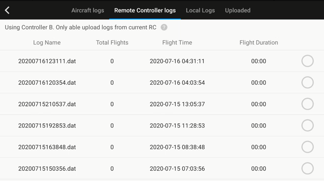 Mount the H20 series gimbal on M300 RTK and connect it to DA2, then you will find H20 Series in the firmware update section with M300 RTK.

Previously the consistency upgrade window will pop up if a battery installed has a different firmware version with the one embedded in the aircraft firmware.

Now this function can be triggered proactively in the HMS page, so that you can use it to upgrade multiple batteries. 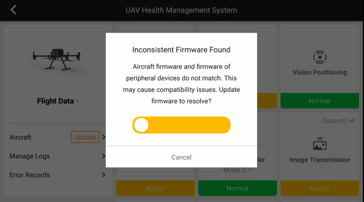 Previously there was a bug that the hovering time cannot exceed 25s, now it can reach up to 30s.

2) Solved the bug that the aircraft may shake when flying to the first waypoint.

4) Solved the issue where the High-Res Grid was not in English.

5) Various other issues and bugs have been fixed.

Subscribe below to be sure you don't miss out on any future updates to the M300 RTK, the H20 Series, and other product news.

With the rise of large commercial buildings across the US, the demand for safe and effective inspection of rooftops has been growing substantially.
END_OF_DOCUMENT_TOKEN_TO_BE_REPLACED

We are now inching toward a place in time where most people begin to wonder: why did I make that New Year’s resolution? Well, we may not be able to help you out much in your pursuit of a “newer,...
END_OF_DOCUMENT_TOKEN_TO_BE_REPLACED

For most households, energy bills are a consistent and expensive outgoing. These costs peak during the winter months when the cold arrives. The U.S. Energy Information Administration predicted that...
END_OF_DOCUMENT_TOKEN_TO_BE_REPLACED

Delivery drones could very well be The Next Big Thing for businesses to deliver goods to their customers. They can also be extremely helpful in transporting sensitive items such as medical supplies...
END_OF_DOCUMENT_TOKEN_TO_BE_REPLACED