Our passion for innovation and excellence has led us to create revolutionary products that empower users across industries, and the Matrice 300 RTK is a prime example of that.

Ever since its release in May 2020, the M300 RTK has offered unparalleled performance and stability, even in the most challenging conditions and circumstances. Be it the Three Propeller Emergency Landing mode or a slew of category-defining features that it packs in, the M300 RTK has continued to excel in areas like surveying, inspection, mapping, and emergency response.

And now, in our continued effort to equip you with the best, most robust industrial drone platform, we have released our first firmware update for 2021. The update, v02.02.01.02, will empower your M300 RTK drone with new functionalities, enhance its safety features, and address some known issues.

Here’s everything you need to know about this new update…

Our most powerful drone yet is now ready to support our most powerful camera payload dedicated to geospatial data acquisition, the DJI Zenmuse P1. The P1 integrates a 45-megapixel full-frame low-noise high-sensitivity sensor on a 3-axis stabilized gimbal, and supports a variety of fixed-focus lenses.

The P1 is now available for order through official DJI dealers and we are excited to see how photogrammetry professionals leverage its unique features to work faster and smarter.

The Circular Scanning Millimeter-Wave (CSM) Radar is a mountable accessory that increases the situational awareness of M300 RTK platform’s six visual collision detection sensors. This IP45-rated product can accurately identify thin objects such as powerlines and tree branches even during a night flight, so you can fly safely even in close proximity to your target.

Updating your M300 RTK drone to the latest firmware version will allow you to use both the vision sensors and the radar system – together and individually alike.

Elevation models are important for many geospatial applications. Previously, the M300 RTK showed elevation based on the ellipsoidal height of the aircraft, which is measured by the GNSS/RTK system. This system uses a theoretical sea level estimated by a World Geodetic System (WGS84) ellipsoid, which does not perfectly follow the theoretical global mean sea level.

In the real world, the orthometric height (altitude above mean sea level using a geoid model) is more intuitive and supported by many geographic information system (GIS) platforms. This is why the latest firmware of M300 RTK clearly differentiates between different elevation models and offers three distinct parameters in the DJI Pilot app:

Ellipsoidal Height: The ellipsoidal height of the aircraft measured by GNSS/RTK system (using WGS84 by default)

Both the ASL and the ALT of the aircraft are displayed in the FPV/camera view. If you enable the RNG function (laser rangefinder), the ASL of the target point will also be displayed. 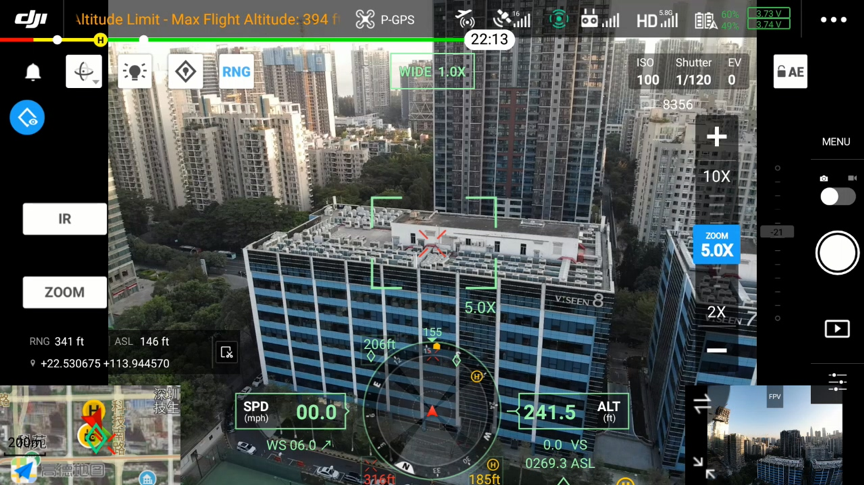 In a waypoint flight mission, if you select ‘M300 RTK’ as the aircraft model, you can choose to plan the mission with either ALT or with ASL (EGM96). If you pick ALT, all of the waypoints’ elevation would be relative to the height of the takeoff point. So, if the takeoff point was changed to be 10m higher than the original one, the entire mission will then be 10m higher than the planned one. But if you plan the mission based on ASL (EGM96), the route will not change no matter where your takeoff point is. 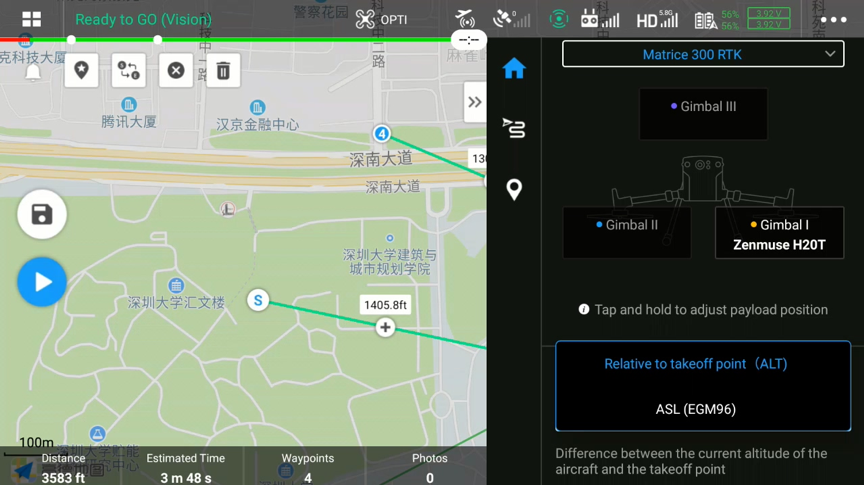 In a survey mission also, you can also choose the Altitude Mode to be either relative to takeoff point (ALT) or ASL (EGM96). When ALT is selected, you must set the Flight Route Altitude and the distance from the takeoff point to the target surface. This is necessary to ensure the GSD and overlap ratio calculations are correct when the terrain to map and the takeoff point differ in elevation. 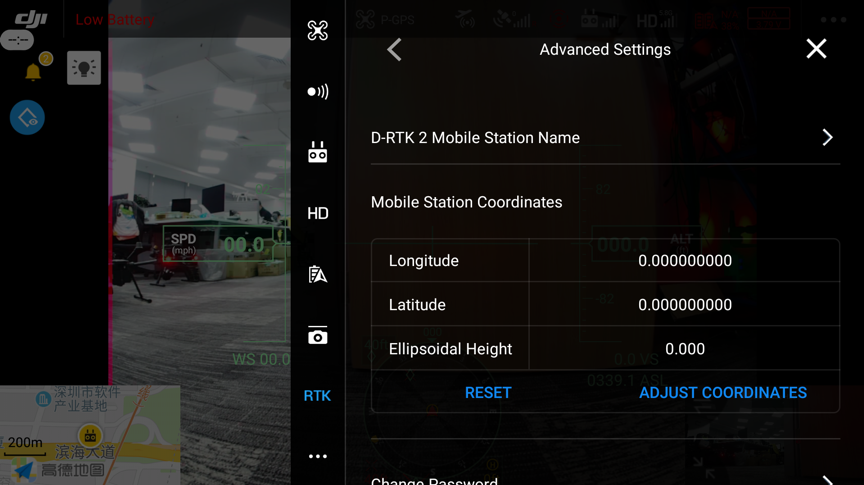 Height information is included in the EXIF/XMP data of a photo taken by M300 RTK with H20 Series or other payloads. For example, if you open the JPG file with a text editor, you can find the ‘AbsoluteAltitude’ value referring to the ellipsoidal height of the aircraft when the photo was taken.

Note that the positioning and altitude data in photos will continue to be used for 2D and 3D modeling in DJI Terra. 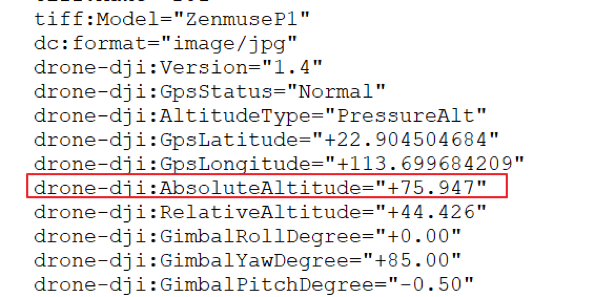 A Terrain Awareness Mode has been added to Mapping Mission. To leverage this mode, you will need to import a DSM file with ground height information. The DSM imported should be in .tif format, needs to be 20MB or smaller, with spatial resolution less than 10m. Utilize WGS 84 / EPSG: 4326 for coordinate reference system. Make sure to include enough buffer so the DSM covers the extent of the flight area. Vertical datum for elevation data should be ellipsoidal.

Meanwhile, to avoid any accidental interruption of a mission, the record and focus/shutter buttons on the remote controller have been disabled for Mapping, Oblique, and Linear Flight Mission modes. And whenever a flight mission gets paused, a notification will pop up with the reason why.

Another improvement comes in the form of a better optimized gimbal control mechanism to ensure smoother movement of the payload. Also, expect to find H20 infrared camera and PSDK 102S in the camera list when planning flight missions.

The RTH function has always been one of the touchstone failsafe features of DJI drones. After this firmware update, the default RTH altitude of your M300 RTK will be changed to 100 m (328 ft), while the maximum RTH flight speed will be set at 15 m/s. And here’s what will happen when:

Watch the following video for a step-by-step guide to update your M300 RTK drone to the latest firmware:

For the best flight and data collection experience, we recommend you use the latest firmware version. Here are the complete release notes, and please  make sure to subscribe below so you don’t miss out on any future updates to the DJI M300 RTK.

With the rise of large commercial buildings across the US, the demand for safe and effective inspection of rooftops has been growing substantially.
END_OF_DOCUMENT_TOKEN_TO_BE_REPLACED

We are now inching toward a place in time where most people begin to wonder: why did I make that New Year’s resolution? Well, we may not be able to help you out much in your pursuit of a “newer,...
END_OF_DOCUMENT_TOKEN_TO_BE_REPLACED

For most households, energy bills are a consistent and expensive outgoing. These costs peak during the winter months when the cold arrives. The U.S. Energy Information Administration predicted that...
END_OF_DOCUMENT_TOKEN_TO_BE_REPLACED

Delivery drones could very well be The Next Big Thing for businesses to deliver goods to their customers. They can also be extremely helpful in transporting sensitive items such as medical supplies...
END_OF_DOCUMENT_TOKEN_TO_BE_REPLACED