Surveyors and GIS professionals have the highest standards when it comes to their tools and their trade. It’s no wonder that many surveyors are turning to drones for their mapping and 3D modeling needs. Surveying drones consistently achieve results that meet survey-grade accuracy standards, and in comparison with traditional surveying techniques, drones drastically reduce the time, cost, and effort required.

Surveying with drones is more complicated than snapping a few photographs from above. There are several steps required, from preparing ground control points, to mission planning, to processing the images you capture with surveying software.

With DJI’s latest flagship surveying combo, the Matrice 300 RTK (M300 RTK) and the Zenmuse P1 payload, surveyors have at their fingertips the ultimate surveying solution in terms of accuracy and efficiency. Thanks to the P1’s Smart Oblique Capture (SOC) feature, surveyors can now capture and create 3D models of their targets more efficiently than ever before.

What is oblique photography?

Within drone surveying, a technique that has seen success in 3D modeling is the use of oblique photogrammetry, where images are captured by several lenses. These multiple lenses are mounted together in an array with fixed axis angles. The resulting images reveal details that are sometimes missed when only capturing vertical photographs, such as features occluded by vegetation or tall structures.

Oblique camera systems traditionally use a mechanical rig with five cameras in fixed positions in a cross configuration; one camera in the center is surrounded by four other cameras, in front, behind, left and right, equally distanced at 90-degree intervals. This system places the central camera at an oblique angle where the ‘nadir’ angle (the point directly below the camera at ground level) is at a known, fixed point in the image. 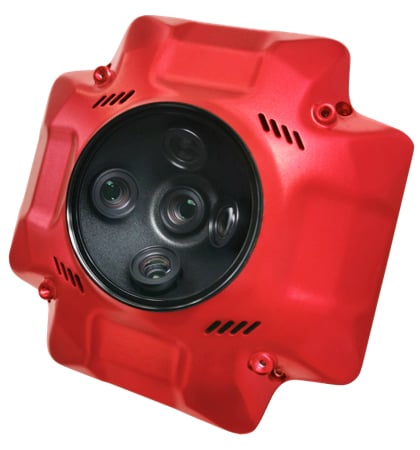 When compared with vertical aerial photography, oblique photography has many benefits. While a vertical angle can help show the placement of features like buildings, streets, or open spaces in relation to each other, oblique aerial photos are better at giving perspective of the appearance of features that rise from the ground like buildings, topography, foliage, etc in relation to the ground and horizon.

Some more benefits of oblique photography include:

However, there are disadvantages associated with traditional oblique camera arrays. Due to the number of lenses, the rig can be very heavy and expensive. A heavier payload means shorter flight times and more time spent swapping drone batteries, especially for larger-scale surveying missions.

On the other hand, if attempting oblique photogrammetry or 3D modeling with a single camera, then five flights are required (Nadir, FBLR) which takes significantly longer. For some time a new, lighter, quicker, and more cost-effective solution has been searched for.

What is Smart Oblique Capture?

Smart Oblique Capture (SOC) is a new alternative process, exclusive to the P1 and the M300, that uses a single camera mounted on a gimbal to function as all five of the cameras in an oblique camera system. The P1 is a ‘traditional’ camera (not an oblique camera) with a single lens, but can produce the same results thanks to elegant software.

With Smart Oblique Capture, because the photos in each “set” of shots are not taken simultaneously, the position data, drone speed, and gimbal direction are embedded into the metadata of each photo in order to compensate for the shift in position and perspective; similar to the mathematical calculations used to amalgamate the consecutive captures in an oblique camera array.

In this video, you will see that the dark green areas are only taking one side shot, purely for height data. The nadir shots are only captured in the yellow and light green areas and then at multiple points in the red designated target area, where the most information is required. Once your survey is complete, you can utilize post-processing software, like DJI Terra, to collate all the data and produce the 3D models required; the SD card can simply be plugged into a laptop to import the images for processing.

Each dataset of shots (Nadir, FBLR) is compared to one another, where the nadir shots are used to create a top-down 2D map. The directional shots from each position are compared in order to designate relative height information for those elements on the 2D map.

Some more about the Zenmuse P1

The P1 is DJI’s flagship photogrammetry and surveying payload. With a 45 MP full-frame, low-noise, high-sensitivity sensor with interchangeable 24/35/50mm fixed-focus lenses on a 3-axis stabilized gimbal, this is our most powerful surveying camera to date. The P1 can take a photo every 0.7 seconds (with shutter speeds of up to 1/2000th of a second) and can cover 3 km2 in a single flight.

The P1 is compatible with DJI’s Matrice 300 RTK, our latest commercial drone platform. Capable of 6 directional sensing and positioning, 55 minutes of flight time, and a 15km range, the M300 is a welcome new addition to any drone fleet.

Get ahead, get smart

By cutting down on the number of images taken, SOC effectively reduces the in-air time of a mission and, therefore, the total time of surveying and mapping. This has the added benefit of a subsequent 20%-50% reduction of post-processing time.

With the rise of drone use in surveying, mapping, and construction, there is a constant need for their utilization to become simpler and more economical, in terms of time and cost. Smart Oblique Capture is one such innovation that covers both.

We are now inching toward a place in time where most people begin to wonder: why did I make that New Year’s resolution? Well, we may not be able to help you out much in your pursuit of a “newer,...
END_OF_DOCUMENT_TOKEN_TO_BE_REPLACED

For most households, energy bills are a consistent and expensive outgoing. These costs peak during the winter months when the cold arrives. The U.S. Energy Information Administration predicted that...
END_OF_DOCUMENT_TOKEN_TO_BE_REPLACED

Delivery drones could very well be The Next Big Thing for businesses to deliver goods to their customers. They can also be extremely helpful in transporting sensitive items such as medical supplies...
END_OF_DOCUMENT_TOKEN_TO_BE_REPLACED

When road accidents occur, public safety personnel will often need to document the scene. This critical step, also known as accident reconstruction, is a delicate balancing act between accuracy and...
END_OF_DOCUMENT_TOKEN_TO_BE_REPLACED