With DJI drone solutions, Altametris optimizes its business performance in terms of safety, speed and scalability

Will the DJI Matrice 300 RTK and Zenmuse P1 become the new industry standards for surveying and mapping? Altametris, an SNCF company and pioneer in the field of data collection, processing, and analysis, believes so, after putting them through some rigorous industry testing.

Utilizing drones to take surveying operations to the next level

On the morning of January 4th, 2021, a drone specialist from Altametris arrived at a section of an SNCF railroad to test and compare different surveying methods. In the past, to get results accurate to 3cm, approximately 40 ground control points (GCPs) per square kilometer would have to be set up - a time-consuming practice that would take at least 3 hours. The alternative option would have been to use a highly accurate tacheometer, but again, this would take twice as long to complete.

How Altametris used to map and survey a railway track: GCPs are materialized by plates with black and white checkerboard. The coordinates of the center of these plates are registered by the GPS Spectra. (Image credit: Altametris)

Both these techniques also require the in-person handling of equipment on and around the railway tracks, which not only poses certain risks for the operator but also takes a lot of time and effort as the complex railway terrain is also extremely difficult to map accurately. Time and safety are essential factors for a successful surveying operation, which is why innovative surveying methods can lead to a considerable competitive advantage.

That is why Altametris wanted to test the DJI Matrice 300 RTK and the Zenmuse P1 payload. Given the tedious nature of traditional methods, the company was hoping for great efficiency and safety gains through the deployment of a drone surveying solution. Due to its built-in RTK module and the large amount of metadata that is intelligently linked to the center position of the Zenmuse P1's full-frame sensor, the number of GCPs could technically be reduced to zero. However, Altametris decided to set up six GCPs for quality control purposes, which still reduced the time it took to prepare the operation by more than two hours. 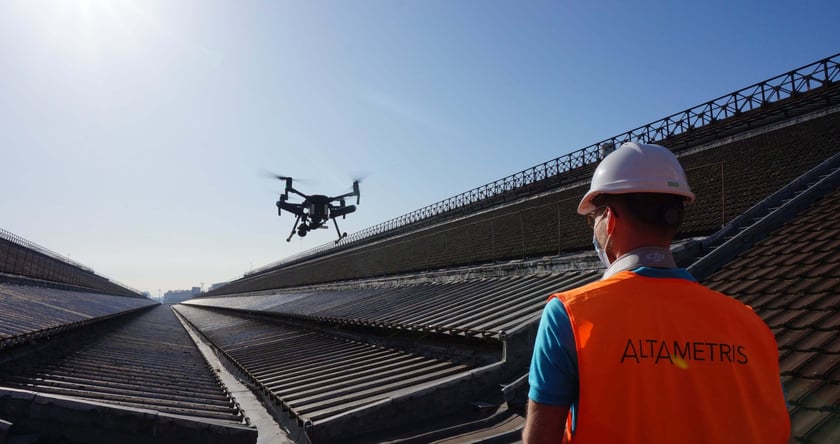 A highlight in low light

While the DJI Matrice 300 RTK lays the groundwork for an airborne mapping and surveying solution, the Zenmuse P1 payload and its full-frame sensor take operations to the next level.

On the day the site was to be mapped, the available light was quite low, which is why six (6) GCPs were initially set up. After everything was prepared, the specific area to be mapped was selected on the drone controller and the DJI Matrice 300 RTK with the Zenmuse P1 payload was launched. Within 20 minutes, the Zenmuse P1, with its mechanical shutter, automatically took a total of 641 pictures from up to five different angles (front, left, right, top and rear) on every checkpoint.

The DJI Matrice 300 RTK is easily transported in its case. Deployment only takes a few minutes. (Image credit: Altametris)

Receiving this amount of data in such a short period of time is made possible by the Smart Oblique Capture mode of the Zenmuse P1 payload. The camera automatically tilts and rotates on each checkpoint to capture a comprehensive set of pictures of every angle. This feature in connection with the pre-planned flight routes lets the operator execute a whole drone mapping operation at the push of a button while standing at a safe distance. And the drone operator did exactly that even though the lighting conditions were still not optimal.

To the surprise of Altametris, the low light did not affect the picture quality at all. Instead, the Zenmuse P1 produced incredibly accurate data thanks to its full-frame sensor. The pictures showed no noise whatsoever, which was critical because, at such a high altitude, a higher ground sample distance and even a few pixels of noise would equate to several centimeters on the ground, and therefore much decrease the accuracy of the final model.

In the next step, the 641 pictures were imported into DJI's Terra software to create the final 3D model. This is achieved by letting the software automatically create a point cloud out of the pictures, which are stitched together by matching the pixels of the different images. The point cloud serves as a basis for the 3D mesh that is later rendered into the final 3D model.

This whole process is automated, making it very approachable even for novice users in the fields of drone surveying and photogrammetry. The point cloud can of course be manually adjusted to fix any points that were mistakenly matched to one another. For Altametris, the pixels were perfectly matched, allowing the rendering of 3D modeling right away. In less than two hours, the model was finished and ready to be analyzed.

A giant leap from satellite to drone surveying

Even though the satellites that are utilized for the GCP and tacheometer methods are orbiting in the earth's exosphere, they are extremely accurate through triangulation techniques. Matching that accuracy is a big challenge for any alternative method of mapping and surveying. Altametris was able to directly compare the accuracy of the drone mapping results to the accuracy of the control GCPs as well as the results of earlier mapping operations on the same site.

However, when taking into account the enormous amounts of data captured by the DJI drone, the accuracy is unparalleled. This allows for the creation of highly detailed models of large areas in short periods of time. 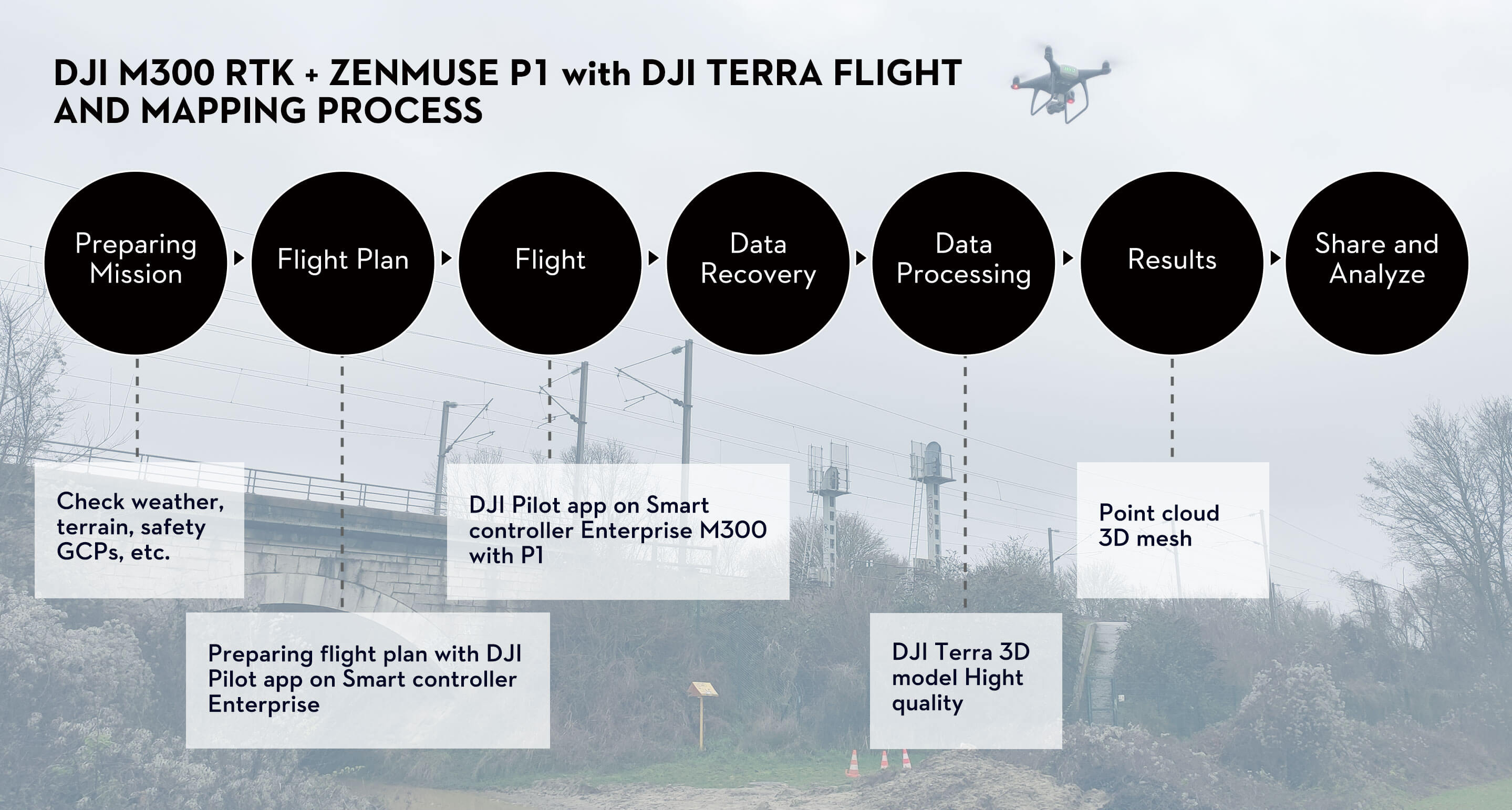 The flight and mapping process used by Altametris to survey the railway.

Above and beyond with DJI drone surveying

Altametris predicts that the need for accurate data on a large scale will become increasingly important as more and more analog assets are being digitized and surveyed. In the pursuit of the perfect solution for this, three main factors form the basis of evaluation:

According to Maxence Trogneux from Abot, a distributor of professional drones, DJI's drone mapping solution balances this triad of requirements best when it comes to larger-scale surveying and mapping operations.

The intelligent connection of available metadata, like the alongside position and altitude, utilizing the RTK positioning module (GPS L1 L2, GLONASS L1 L2, BeiDou B1 B2, and Galileo E1 E5a), the automated Smart Oblique Capture mode's camera angles, and the sensor's center position make for incredibly accurate drone surveying results while being up to 15 times faster and also safer than traditional surveying and mapping methods.

At a price of 12,700€ ($13,200) for the DJI Matrice 300 RTK, it is even less expensive than the GCPs + Spectra GNSS receiver used by Altamteris, while, maybe even more importantly, having virtually no limits in regard to the mappable area size. Even if the 55 minutes of flight time are not enough to cover a certain area, the built-in Operation Resumption feature lets drone surveyors seamlessly continue their operation after changing the battery.

For Atametris, the time and cost savings are very important factors – DJI performing the task up to 15 times faster and four (4) times cheaper than the alternatives make perfect business sense to implement a drone surveying solution. However, they are not the only important achievement of such a solution:

For the operators, site safety is a major concern as well. This is massively improved by being able to collect all the data from a secure distance to possible safety hazards, one of which is the current COVID pandemic that can be a risk factor when surveying crowded sites, like buildings, in person.

The DJI Matrice 300 RTK is not only a tool for gathering intelligence on sites to be surveyed. It goes beyond that by improving the mapping process in nearly every aspect through increased safety, speed, scalability, and automation, thus delivering an unparalleled solution that is quickly establishing itself as the new industry standard in surveying and mapping. 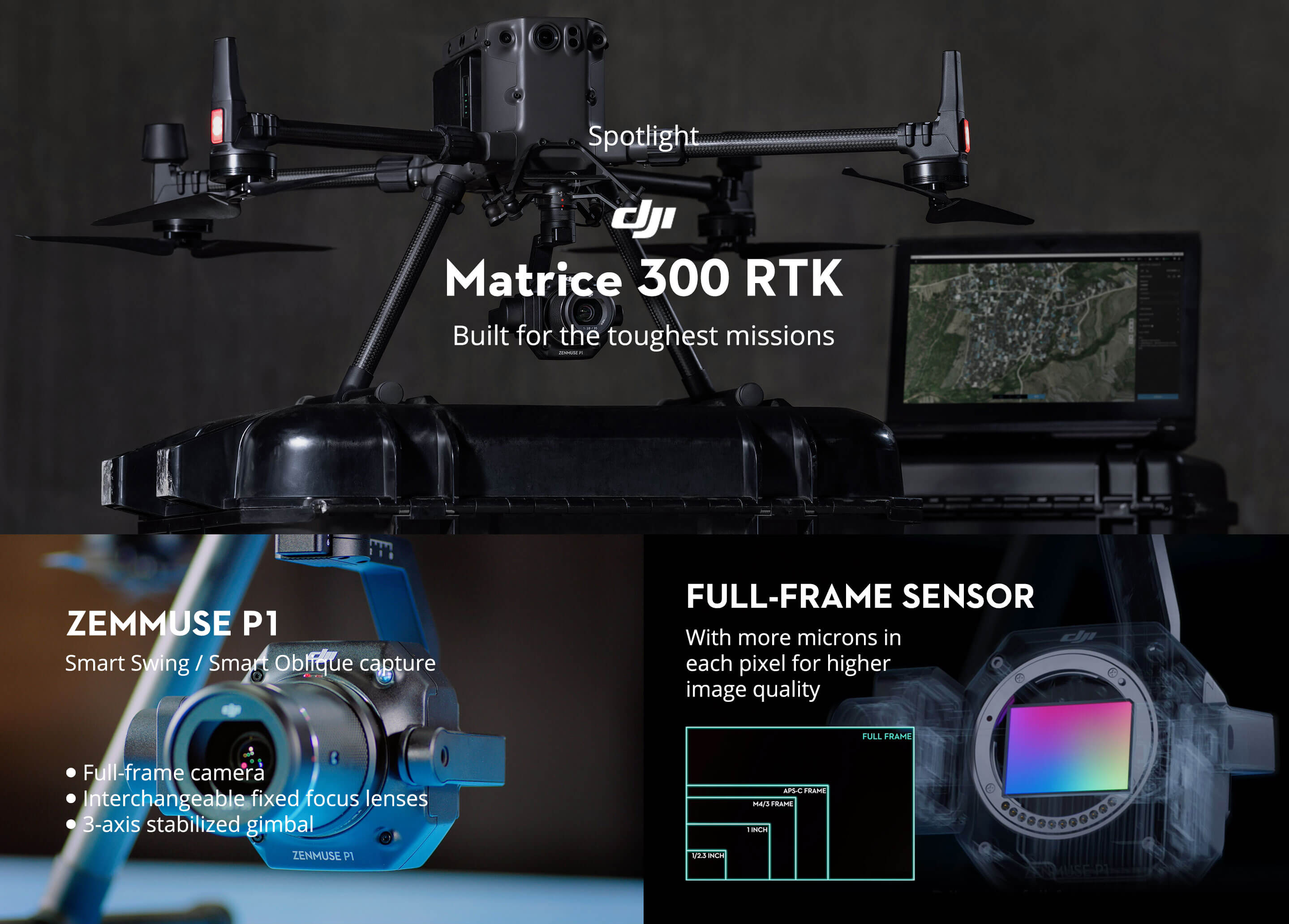 Coastal erosion has become an increasingly severe problem in much of the United States. An analysis by the nonprofit research group Climate Central estimates that rising sea levels could wipe out...
END_OF_DOCUMENT_TOKEN_TO_BE_REPLACED

Energy is the essential ingredient of human evolution. It powers economies and sustains life as we know it. And yet our relationship with this precious commodity is at a turning point.
END_OF_DOCUMENT_TOKEN_TO_BE_REPLACED

When Alex Nunez left his native Venezuela for Miami in 2015 to be closer to his sister – and open the next chapter of life in a new city and country – the trained engineer decided to broaden his...
END_OF_DOCUMENT_TOKEN_TO_BE_REPLACED

In many parts of the world, where ships are used to import oil and gas products, refineries and storage terminals are typically located near navigable waters. Transfer between a moored ship and an...
END_OF_DOCUMENT_TOKEN_TO_BE_REPLACED