How The Nature Conservancy Uses Wildfire Drones to Protect Our Forests

Firefighters and hotshots work tirelessly and stoically. However, traditional methods of combating wildfires are fast becoming outpaced by our worsening climate.

In Greece, whole islands were evacuated this summer with dozens of people killed, including 25 soldiers deployed to fight the fires. Last year, one Californian wildfire was so potent that it consumed more than a million acres, earning it the ominous title as the world’s first-ever “gigafire”. Elsewhere, Australia’s “Black Summer” of 201-/20 cumulatively destroyed almost 50 million acres of land, making it the most catastrophic natural disaster in the country’s history.

To keep up with the scale and frequency of wildfires, firefighters and forestry services need every advantage they can get their hands on. A proactive, preventative approach with drones is one way to help turn the tide against this new breed of wildfire.

Chief among these is Drone Amplified’s IGNIS system - a sophisticated system for carrying out prescribed burns mounted on the DJI M600. Prescribed fire is the process of deliberately starting controlled fires under precise and predicted weather conditions, to combat the spread of wildfires or prevent them in the first place by reducing the build-up of debris, dead wood, or fuel.  Additionally, prescribed fire is used across the globe as a tool for forest, shrub, and grassland ecological restoration and maintenance. 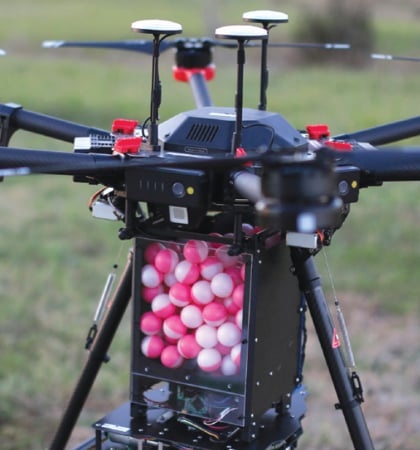 To do this, the IGNIS system enables trained pilots to remotely drop individual payloads of ping-pong ball sized ignition spheres at key locations. Prior to being released, the ignition spheres, or ‘dragon eggs’, are injected with ethylene glycol, causing them to ignite 30-40 seconds after landing. Fully loaded, IGNIS weighs 4 kg meaning it needs to be mounted on a heavy-duty drone such as the M600 that also has the battery life to withstand 20-30 minute flight times. Simple yet elegant, the IGNIS system is backed by the IGNIS app that allows firefighters to set a series of waypoints for automated flights giving them greater control over how and where to set blazes. 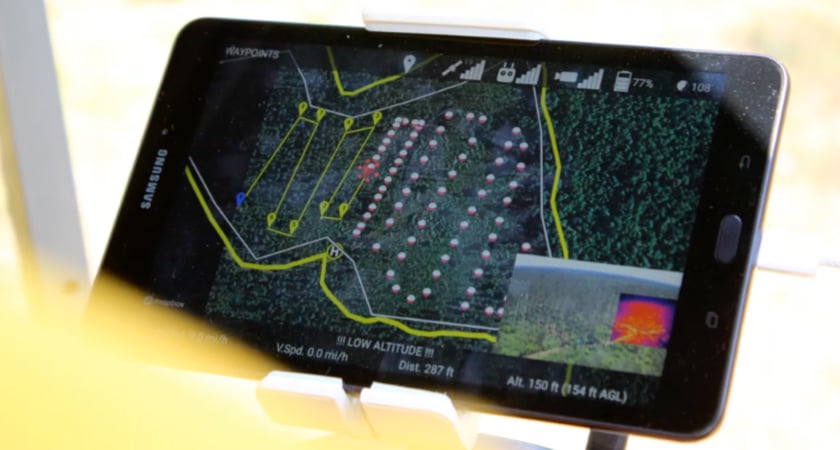 Putting IGNIS to the test

One organization trailblazing IGNIS is The Nature Conservancy (TNC), a non-profit environmental protection agency that is no stranger to drone technology. The Virginia Chapter of TNC oversees vast tracts of land varying from coastal areas and island chains to rugged forests for which they already employ a large fleet. They currently have a total of 5 pilots commanding a fleet of 6, mostly smaller, drones such as Mavics and Phantoms.

Generally, missions are focused on monitoring, for example, shoreline habitats or bird populations, as well as forest inventory where drones can help accurately and efficiently measure the size and volume of areas of forest (or even individual trees) to deduce how much carbon is being sequestered.

Amazing as this is, nonetheless, the jewel in their crown is the M600-mounted IGNIS which has already seen tremendous success as an alternative to traditional methods for prescribed burns. 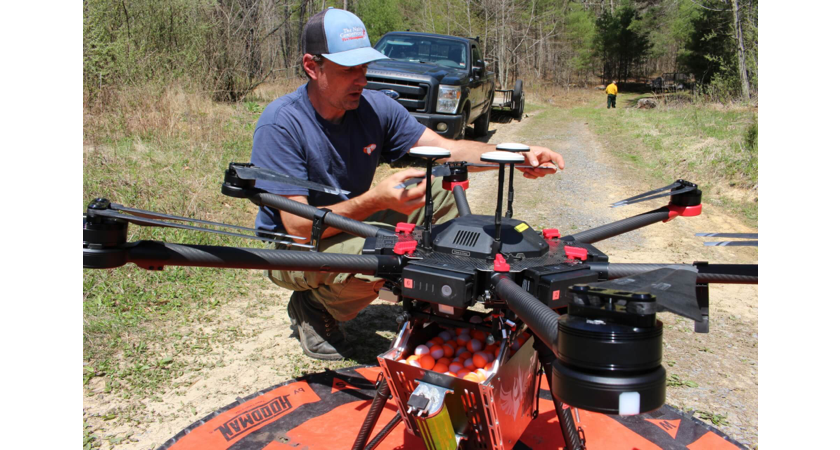 How drones help decrease risk to firefighters and increase productivity

Traditionally, prescribed burning is conducted by ground teams with hand-held drip torches or by expensive helicopter missions. However, both methods are fraught with dangers for the firefighters involved. Prescribed burns by hand expose drip torch walkers not only to the very wildfires they are seeking to battle but also to dangerous levels of smoke inhalation. And don’t forget the other hazards associated with this fieldwork, like bee stings, poison ivy exposure, twisted ankles, heat exhaustion, and more.

The process of covering many acres of wild land by foot is physically exhausting, impacting judgement and the ability to make split-second decisions under pressure, which only adds to the danger. At the same time, on-foot prescribed burning is applicable for only relatively small areas of land, limiting its usefulness.

For the larger prescribed burns, those covering several thousands of acres, the TNC instead conducts helicopter missions. As useful as these are, however, they come with several serious drawbacks. First, they are expensive. For a typical 1,000 to 3,000 acre burn, a single helicopter mission will usually cost in the region of $5,000 - $7,000 a day meaning that such missions can only be undertaken sparingly – again, limiting their effectiveness. For emergency type III Call-When-Needed helicopter services, it can cost from $14,000 to $24,000+ a day.

More importantly, aerial ignition helicopter missions expose firefighters to additional, avoidable risks. According to the CDC, of all US firefighter fatalities recorded from 2000-2013, over 25% were aviation-related. And from 2007-2016, aircraft accidents were the third major cause of wildland firefighter fatalities, behind heart attacks and vehicle accidents. While only a small proportion of fire aviation is for aerial ignition, firefighters are exposed to additional risks whenever their boots leave the ground.

With this in mind, the IGNIS wildfire drone system is enormously beneficial. Not only are firefighters able to conduct missions from relative safety, but missions are also considerably less expensive.

Typically, the IGNIS is deployed for missions covering between 500 acres and 1,000 acres which is the optimal range for the M600 and also coincides with FAA (Federal Aviation Administration) restrictions and landing zone requirements. As such, wildfire drones are crucial to filling in the large space between very small burns that can still be conducted by hand and huge areas that still require the use of helicopters.

Since the TNC’s first wildfire drone mission, the IGNIS has been hailed as a ‘gamechanger,’ quickly becoming a critical tool. A key factor in this success has been the speed at which the TNC has been able to master and deploy the IGNIS wildfire drones.

While rigorous training is required to operate the IGNIS safely and obtain the necessary license, this entire process, from point of purchase to legally certified, can take less than six months. Having only bought their first drone in November of 2020, the TNC team was fully licensed and trained by the following February and able to begin missions in March.

And the results have been remarkable with the IGNIS delivering prescribed burns to more than 7,000 acres in the first 6 months of operation.

“It’s the biggest change to how we work I’ve seen in 26 years,” says Sam Lindblom, Director of Land Management and Fire Program Manager, Virginia. “I wish I had 6 more of these units to fulfill all the requests for burns.”

The future of wildfire drones

Sadly, with the impacts of climate change becoming ever more apparent, the likelihood of greater and more frequent wildfires and ‘gigafires’ is growing. To rise to this threat, adoption of innovative tech solutions, such as the combination of IGNIS and the Matrice 600 Pro, is becoming increasingly important.

In the United States, however, using drones to prevent wildfires is artificially restricted. The U.S. Department of Interior (DOI), which manages 20% of America’s land, grounded its drone fleet in 2020 because of fears about drone components made in China – even though DJI built a special “Government Edition” product for DOI that was validated by the Department of Homeland Security.

These policies based on a drone’s country of origin can cause real harm by blocking Americans’ access to helpful technology and limiting public safety missions. The ability for craft to carry thermal imaging cameras, for instance, has been employed by urban firefighting units to detect hotspots in burning buildings thus reducing the danger to firefighters and increasing operational effectiveness. Likewise, thermal drones are being used to make solar energy farms much more economical, reducing the cost of renewable energy and enabling solar farms on a much larger scale than ever before.

When it comes to protecting America from wildfires, TNC has shown how the DJI M600 with Drone Amplified’s IGNIS system can safely and securely help reduce the risk of uncontrolled blazes while keeping firefighting crews safer. However, harmful policies that keep this tool grounded present a different kind of wildfire risk – and technology alone will not be enough to mitigate it.

As we brace ourselves for the effects of climate change, one of the greatest threats immediately facing us is that of wildland fires. Rising temperatures combined with rainfall shortages in regions...
END_OF_DOCUMENT_TOKEN_TO_BE_REPLACED 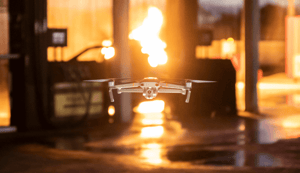 The 2019–20 bushfire season in New South Wales, Australia, was the most severe on record. A long-term drought and higher than average temperatures led to intense statewide fires.
END_OF_DOCUMENT_TOKEN_TO_BE_REPLACED 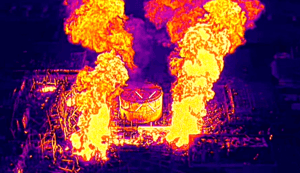 On July 5th, 2021, at approximately 2:50 am, an explosion at Ming Dih Chemical factory rocked the small Thai district of Racha Thewa, less than 20 km from Bangkok. So intense was the explosion it...
END_OF_DOCUMENT_TOKEN_TO_BE_REPLACED 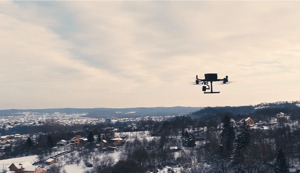 “No training and scenario simulation can prepare you for the real thing. So, we started doing what we do best: using technology to help save lives.”
END_OF_DOCUMENT_TOKEN_TO_BE_REPLACED