GROUPAMA, a leading insurance provider in France, has integrated the DJI P4 Multispectral into its field experts crop damage imagery capturing workflow, providing its farmer-customers with on-demand, accurate multispectral data. The Project, which originally started in GROUPAMA Rhône-Alpes Auvergne is now being expanded to the whole GROUPAMA group.

Drone technology in agriculture generally needs to meet or exceed two requirements to garner the attention of today’s tech-overloaded farmers: It must provide accurate data for timely decision making, and it has to efficiently fit into – and even enhance – the users’ workflow.

The earliest versions of these flying farm robots largely failed to deliver on both accounts, as automation and fully integrated sensing packages were both few and far between during the early days of the technology.

Since those early days, drone technology manufacturers have rebooted and reset, returning to the table with turnkey systems that require as little farmer intervention as possible, with fully integrated sensor suites that provide valuable data at the drop of a Pioneer brand ball cap.

One such group that has found success integrating one of the latest ag drone releases into its day to day workflow is French insurance giant GROUPAMA, a 34,000-plus employee outfit that insures much of the grain and produce grown throughout the French countryside.

The group and its network of field experts has always needed to have eyes on crops – especially when extreme weather rolls through the countryside and crops receive the brunt of the damage.

Before drones came into widespread existence, this meant a lot of measuring and quantifying by GROUPAMA field reps using nothing but their eyeballs, along with all kinds of digital and non-digital measurement tools.

“It was kind of difficult, and it would literally take them days [to inspect a field] and they would need to acquire many different materials to measure things properly,” recalls Timothee Craig, GROUPAMA Research Engineer. “There were different kinds of measurements they had to do to properly assess and estimate the amount of surface damage on the crops from climate issues, like hail.” 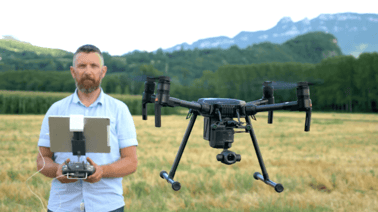 Once drone technology became widely available, the group moved fast, acquiring a Phantom and equipping its field techs with iPads and the company’s proprietary exo.expert software for post flight processing.

“We started back in June 2016 with RGB mapping work on the Phantom 4 Pro (P4 Pro) and then we purchased the DJI Matrice 200 (M200),  when that came out, the idea being to measure and quantify the crop damage because we are an insurance company,” recalls Philippe Vayssac, Chief Innovation Officer of GROUPAMA Rhône Alpes Auvergne.

Those first two drone platforms both worked okay, but admittedly neither was quite the game-changer that GROUPAMA was looking for.

“It [M200] was just too large to carry around the countryside, and you had to connect the different cameras and calibrate it and everything, there were just a lot of things involved that would make the process take a lot longer,” Timothée Craig says.

Having found a platform with the right mix of portability and tech specs in the original P4 Pro, farmers the countryside over began taking notice of what GROUPAMA was doing with the drones, and they started asking the group’s field experts for help with other issues they hoped drone technology could alleviate, namely helping the farmers determine where and when to apply nitrogen fertilizer in rapeseed crops for optimal plant uptake.

So, Timothée Craig and his team at GROUPAMA went back to the drawing board and came up with a SOP for acquiring imagery with the P4 Pro and turning that data into plant biomass maps in the exo.expert solution, a GROUPAMA Rhône-Alpes Auvergne innovation. It's farmer clients now able to quickly identify the areas of weakest crop growth where additional nitrogen applications could drive yields (and farm profits) higher. Or areas where it made sense to apply less due to poor absorption, or a host of other agronomic factors.

“Our field experts, they really liked that they could see the results (of the flight) with the P4 Pro immediately in the field, without Internet connection, using an iPad Pro and then have the full resolution imagery about a half hour later, without having to do any editing,” Jingmin Guan, GROUPAMA Research Engineer, remembers.

“And that brings us right up to the fall of last year (2019), when DJI announced it was releasing the P4 Multispectral (P4M),” Jingmin Guan says. “We knew immediately we had to get one, because it covered everything that we wanted (in a drone), so we bought one right away.”

The DJI Phantom 4 Multispectral designed for uses in precision agriculture

Right out of the box, from day one of having its field experts flying the new P4M, GROUPAMA knew it had something special.

Testing the new bird on its clients’ rapeseed fields in Assieu, just south of the group’s global headquarters, the efficiency gains from having the sensor and the drone integrated into one solution were immediately evident. Now, GROUPAMA experts can cover anywhere from 15 to 30 acres per working day, with some able to fly 100-plus acres when the fields are situated in close proximity.

Covering more acreage in a day is always a powerful statistic in farming, because in that world time is everything, and time is money.

“[Everything] is just there in one single drone, so we don’t have to mount anything you just fly the field and get the pictures, which is the workflow we were used to anyways with the regular P4 Pro,” Craig explains. “That’s really efficient, because for us it simplifies the workflow and lets our experts do their job and be masters of the farm.”

Prior to offering this service to its farmer customers, Craig says many of the farmers he worked alongside were signing up for costly subscriptions to lower resolution satellite data providers.

The P4M also allowed GROUPAMA’s field experts to overcome two other limitations it discovered in using the Phantom 4 Pro and M200 in prior seasons.

Number one, the ability to process imagery into an initial preview, or livemap at the edge of the field was important, as many of the flights were taking place in areas with low or even non-existent internet connectivity. And secondly, the built-in RTK module on the P4M was more accurate than anything Craig and his team had been used to that point.

The drone is far, far more precise than all of the drones we’ve used previously,” he adds. “Which helps us a lot because it is very crucial to have that very precise map, and also it adds more credibility to what’s created.” 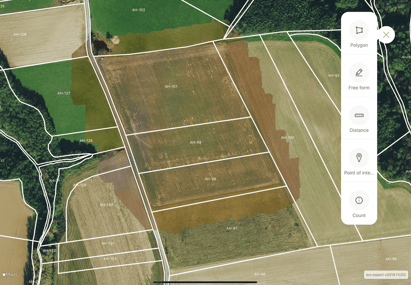 Craig notes the group has yet to test out the included Real-Time Kinematic (RTK) corrections features, achieving accurate enough results with the on-board GPS module.

And of course, having a fully-dedicated, integrated multispectral camera array capturing 5 spectral (Blue, Green, Red, Red Edge) and near infrared bands (plus the standard RGB), didn’t hurt either. The camera has performed above and beyond Craig and the team at GROUPAMA’s expectations, proving more accurate with better resolution than the satellite imagery many French farmers had grown accustomed to using for mapping. 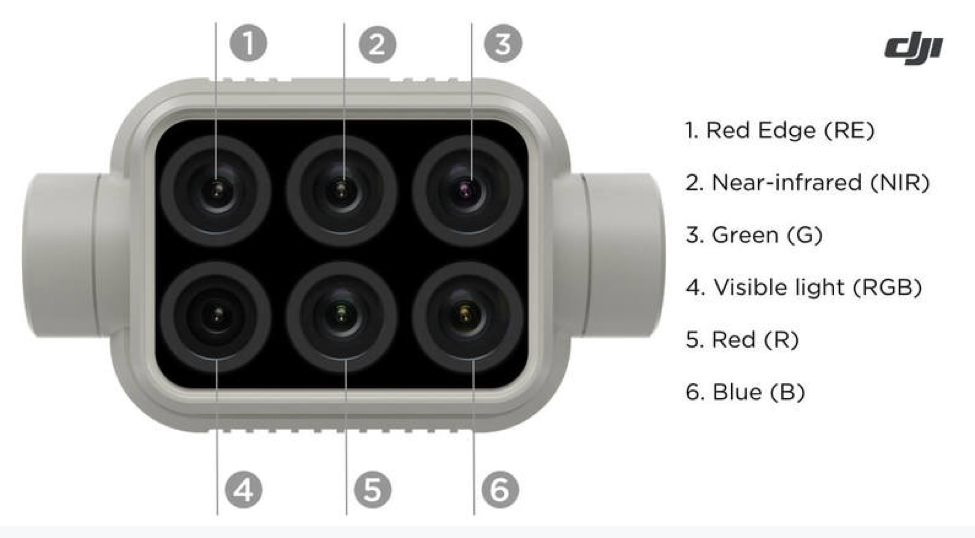 “From the numbers I can remember I think it was roughly like 20 meters per pixel or something like that on the satellite imagery, and we can deliver resolutions under 10 centimeters per pixel with the P4M,” he says.

One aspect of the GROUPAMA Rapeseed project that can’t be measured by a sensor is the peace of mind it provides the group’s farmer customers that they are getting high quality, accurate data to use in the decision-making processes.

“Some of my experts have told me, it’s almost like using the drone is a kind of uniting force in the relationship between them and the farmer,” he shares. “The farmer likes it that they are here and using something so accurate and cutting edge on their fields, and it helps change the conversation from our experts trying to sell them products to our experts are now helping them farm more accurately.”

Next up for the GROUPAMA drone program, according to Craig, is expansion of the program via the purchase of additional P4Ms for the GROUPAMA experts, so that farmers across the entire region can experience what the drone can do for their operations.

For a group insuring and servicing roughly half of the farmers in France, DJI has proven the solution that works the best.

“We figured they (DJI) were the best on the market, and we wanted to equip our guys with the best tools for the job,” Jingmin Guan says. “This project has proven that we were right, and the DJI P4M is the best solution for us.”

GROUPAMA produced a video to highlight their efforts in developing their drone program and the value of their exo.expert app as they deploy it across more farms in their region. 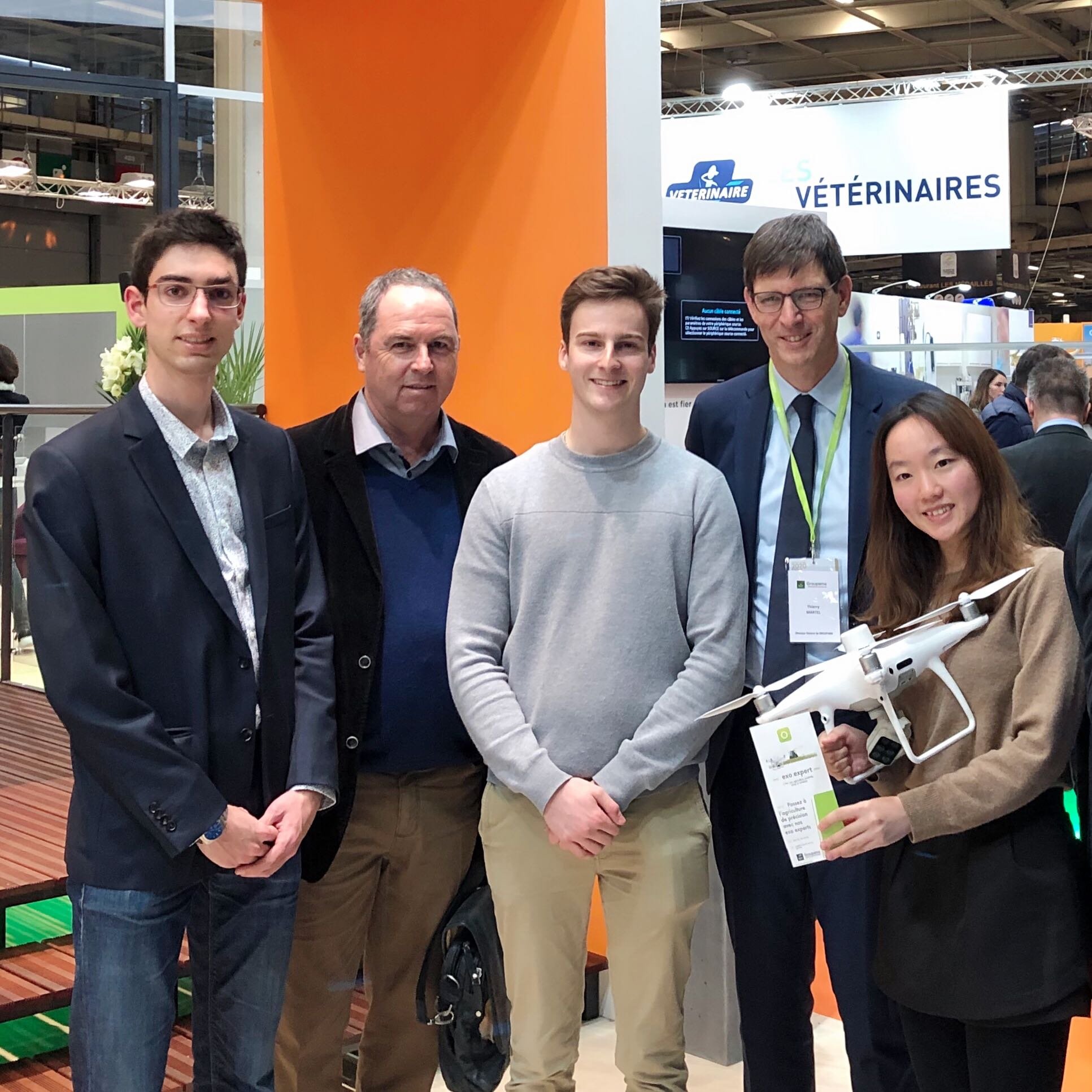 Pictured from left: Antoine Boudon - project owner of Phérodrone ( from agri.builders ) another project of drone initiated  by Philippe Vayssac), Jean-Michel Rhit - one of our experts who have been working on exo.expert for almost 4 years, Timothée Craig, Thierry Martel - CEO of the group GROUPAMA, Jingmin Guan. (photo courtesy - GROUPAMA)

About the Author Matthew J. Grassi

Demolishing a nuclear cooling tower is no small feat. The sheer size and age of the structure requires a deeper inspection to assess for erosion, hazardous materials, and structural integrity. This...
END_OF_DOCUMENT_TOKEN_TO_BE_REPLACED

ArcelorMittal is a true global industry giant. And when it comes to their impact in the steel industry, you can expect accordingly gigantic numbers. ArcelorMittal operates steel manufacturing...
END_OF_DOCUMENT_TOKEN_TO_BE_REPLACED

PipeChina, known formally as China Oil and Gas Pipeline Network, is the largest oil refining, gas, and petrochemical conglomerate in the world. To deliver raw crude to its refineries, the company has...
END_OF_DOCUMENT_TOKEN_TO_BE_REPLACED

Water is the soul of Suqian, a prefecture-level city in China’s northern Jiangsu Province. With two rivers and two lakes flowing through it, Suqian has a rich cultural history, thriving aquaculture,...
END_OF_DOCUMENT_TOKEN_TO_BE_REPLACED