When starting out using drones for your business, it’s important to know their capabilities — and limits. Sometimes, limitations aren't technological, but legal.

Operating drones beyond visual line of sight (BVLOS) is one such area. While technology is progressing regarding BVLOS drone operation, it is still illegal to operate drones beyond the pilot's sight in many countries.

To unlock more possibilities for drones, including using them to transport goods over long distances or perform search-and-rescue tasks, it's clear that BVLOS regulations will have to change. While it's presently possible to apply for BVLOS waivers, a more permanent set of rules will be needed.

With that said, forward-looking drone operators should take a closer look at BVLOS operation, both in its current form and where it will go in the future.

BVLOS operation: What is it?

The current rules on visual line of sight (VLOS) drone operation in the U.S. are maintained by the Federal Aviation Administration. The rule in question, 107.31, requires pilots, visual observers and flight controllers to see a drone throughout its flight. The only tools they're allowed to use are corrective lenses — glasses or contacts.

BVLOS drone operation is anything beyond that definition of VLOS. If the drone passes out of the crew's vision during its flight, it is then in violation of the FAA rule.

The FAA states it currently requires VLOS flight so that:

BVLOS operation uses technology to make flight possible beyond the range of pilots' eyes. The systems involved must be up to high standards of precision to ensure personnel can still verify their aircraft's location at all times, detect any possible impediments, and avoid causing harm.

To reach a greater level of general purpose drone use, it will be important for BVLOS to be more commonplace than is possible with the current BVLOS waiver system. Reaching this point will require continued adoption of next-generation navigation technology and accompanying evolution in the related laws.

Drone safety is the most important aspect of drone operation, and the purpose of modern flight technology is to make sure nothing impedes smooth, secure flight. Drone operators will need reliable transmission systems to engage in BVLOS flight. The cameras streaming data to pilot's remote controllers or headsets will have to provide clear, unbroken views to compensate for the drones flying beyond visual range.

While these systems are already in use and provide vital data for VLOS operation, they become absolutely essential in cases where pilots have been approved for BVLOS flight.

Advanced transmission systems automatically ensure they are broadcasting on the strongest and most reliable channels, so the pilot has an unbroken view from the aircraft's onboard cameras and sensors. Factors such as distance from the pilot and electromagnetic activity in the area can affect signal strength, and must be accounted for.

It's important to note that in cases where drones are being used for filming, photography or photogrammetry, the cameras for those purposes are separate from the operator's first-person view (FPV) camera. This means pilots can have a clear, unbroken look at where the craft is going while allowing the payload cameras to focus in any direction.

Other technology in advanced drone transmission systems incorporates signals from other aircraft in the area, adding an extra level of collision prevention. When planes or helicopters are sending out Automatic Dependent Surveillance-Broadcast (ADS-B) transmissions, the drone pilot will receive alerts, giving plenty of time to steer the drone to safety.

Of course, even the most secure technology needs failsafes. In the case of drone transmission systems, that might mean a smart return to home (RTH) feature. This navigates the drone back to its base if the pilot ever loses contact with the aircraft's sensors and cameras. 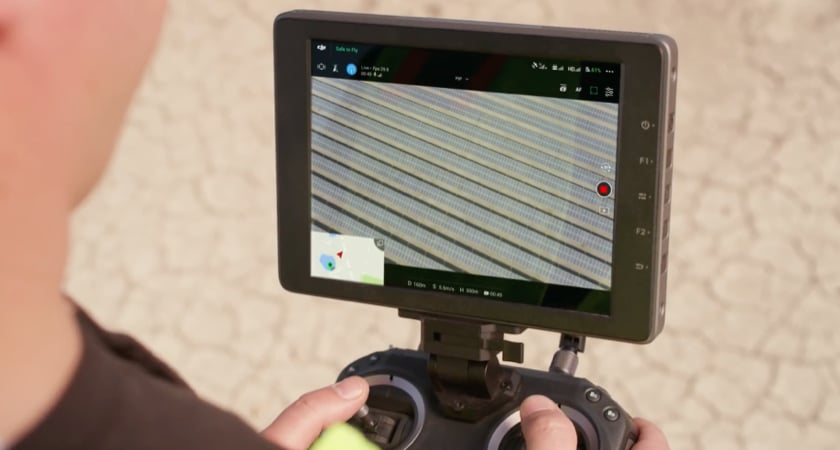 The legality of BVLOS operation has been a source of consternation to some organizations and operators seeking to use their craft in more scenarios. In most countries, BVLOS flight is not allowed without a waiver. These application and approval processes tend to be tough, which leaves most companies unable to take advantage of them.

What does it currently take to apply for a BVLOS waiver? The following are two examples of how countries are managing the BVLOS licensing approvals process.

The FAA offers several different types of waivers relating to its Part 107 rules. The one relevant to BVLOS pilots is 107.31, Visual Line of Sight Aircraft Operation.

When applying for the 107.31 BVLOS waiver, drone operators have to answer a series of questions about how they will keep their vehicles safe. This means telling the FAA how the pilot will monitor the drone's position, altitude, attitude and movement, as well as what safeguards are in place to make sure the drone stays within range of the command link.

The applicant also needs to present a list of the technology or methods used to avoid other aircraft, people and structures. The drone needs to be visible from at least three miles away, and the pilot must be alerted if the aircraft malfunctions. There must also be plans for GPS tracking and cloud clearance, as well as a detailed description of the command frequency.

The FAA has established an Aviation Rulemaking Committee with representatives from across the drone industry to “provide recommendations to the FAA for performance-based regulatory requirements to normalize safe, scalable, economically viable, and environmentally advantageous UAS BVLOS operations.” The FAA hopes the committee’s work will allow the agency to move beyond case-by-case waiver approvals so it can enable routine BVLOS operations for uses such as “long-line linear infrastructure inspections, industrial aerial data gathering, small package delivery, and precision agriculture operations, including crop spraying.”

🇪🇺 BVLOS in the EU

With the EASA rules now in effect in EU member states, BVLOS operations are possible in several ways.

Although they are not allowed in the frequently mentioned and discussed "Open category", the "Specific category" allows for BVLOS operations in several ways: In a "Standard scenario"; using a "predefined risk assessment (PDRA)" or through an individual "SORA application" - all of which require prior approval by the relevant national regulator.

You will need good knowledge of risks associated with your aircraft and the flight you are pursuing as well as you need to demonstrate that you have the technical and theoretical skill sets needed to be able to plan and execute the flight in a safe manner. For non-EASA states like Switzerland and the UK, regulations are similar so there is also a way toward approval of your BVLOS flights.

Applying for BVLOS approval in Australia is handled with a form called 101-09. Applicants have to file a risk assessment and supporting documents along with the main form. In some cases, inspectors have to travel to verify the operator's safety plan in person.

There are seven BVLOS flight scenarios that can be approved under Australian aviation rules. These differ depending on whether the area under the drone is heavily or sparsely operated and whether there are vertical objects in the intended airspace. Remote areas have their own scenarios laid out, and there is a separate category for emergency services flights in evacuated areas.

As for the supplemental materials pilots need to submit, these include map files for their areas of operation, along with proof that the operators have passed relevant training courses. As with U.S. applications, Australian pilots have to detail their communication systems and contingency plans. Operators also need to detail how they will keep their drones away from dwellings and infrastructure, and how they will navigate over roads.

The future of BVLOS drone operation

While drones are already proving their worth in a variety of scenarios today — from surveying and topographic data collection to filming and photography and beyond — there are new possibilities that will only open up once BVLOS operation is more commonplace.

For instance, when more drones are able to fly beyond line of sight, the benefits will be felt in: 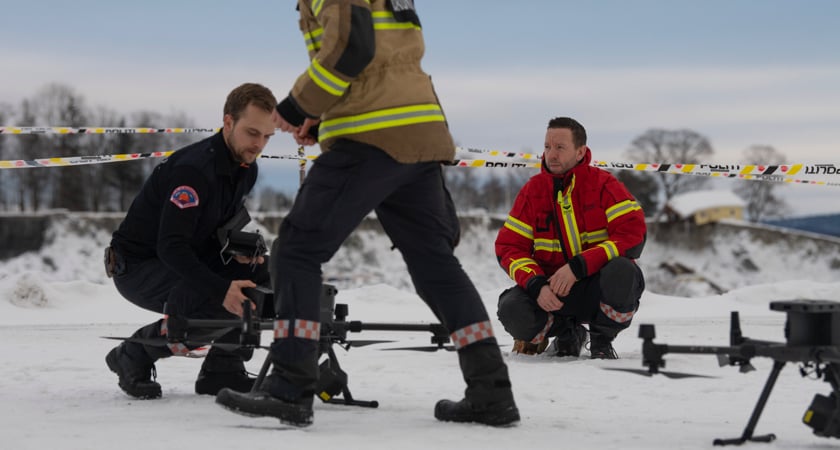 There are a few commonalities when it comes to BVLOS and the future of commercial drone use across industries and countries:

It's easy to envision a future in which drones are more ubiquitous than they are now, making frequent flights beyond their operators' line of sight. Reaching this stage will require change and evolution, but in terms of technology development, the pieces are already in place.

If you're ready to get started on advanced drone operations, reach out to DJI to learn about the latest transmission systems and more.

How to Become a Professional Drone Pilot
in Regulations

The New European Drone Regulations are Here. What's Next?
in Regulations

With the rise of large commercial buildings across the US, the demand for safe and effective inspection of rooftops has been growing substantially.
END_OF_DOCUMENT_TOKEN_TO_BE_REPLACED

We are now inching toward a place in time where most people begin to wonder: why did I make that New Year’s resolution? Well, we may not be able to help you out much in your pursuit of a “newer,...
END_OF_DOCUMENT_TOKEN_TO_BE_REPLACED

For most households, energy bills are a consistent and expensive outgoing. These costs peak during the winter months when the cold arrives. The U.S. Energy Information Administration predicted that...
END_OF_DOCUMENT_TOKEN_TO_BE_REPLACED

Delivery drones could very well be The Next Big Thing for businesses to deliver goods to their customers. They can also be extremely helpful in transporting sensitive items such as medical supplies...
END_OF_DOCUMENT_TOKEN_TO_BE_REPLACED