Is Drone Photogrammetry an Alternative to Classical Terrestrial Surveying Techniques?

If it seems like drone technology has come a very long way in the past few years, that’s because it has. Once thought of as more of a gadget than a specialist piece of equipment, geospatial drones are now changing the surveying game — using photogrammetric methods to create maps in record time.

Trying to decide if a photogrammetry drone is the right investment for your surveying business? Read on to discover how this technology can help you save time, effort, and ultimately money, without sacrificing accuracy. 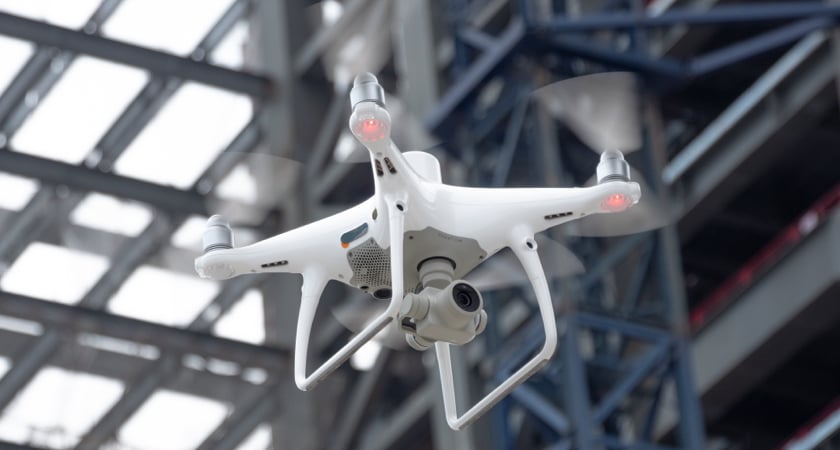 What is aerial photogrammetry?

To understand how drones can be utilized in surveying, let us remind you quickly about aerial photogrammetry. It involves taking multiple aerial images of a feature and using them to create digitized high-resolution 2D or 3D models from which accurate measurements can be deduced. This can be completed with specialized mapping software that looks for common features in images and uses them to stitch your photos together in a way that offers an accurate representation of a space. While typically a coordinate point, the exact common feature can vary based on what type of photogrammetry you’re using (more on that later). Depending on the scope of the project, a model made with photogrammetry may require anywhere from a couple hundred to several thousand separate images.

Notably, a single aerial photograph cannot be used as a photogrammetric map because issues like perspective and distortion have not been addressed. While aerial images are great for photography and film purposes, you need stills from multiple angles to ensure accuracy.

Typically, the most cost-effective way to capture all of these aerial images you need is through the use of an unmanned aerial vehicle (UAV) like a drone. While planes and helicopters can both be used, these options tend to be far more cost-prohibitive.

One of the key advantages of photogrammetric aerial photographs is that they can be used to create multiple kinds of maps. Depending on the kind of photogrammetry software you have, it is possible to create a variety of outputs, like orthomosaic maps, 3D point cloud models, Digital Surface Models, and more. Other types of mapping, like LiDAR — which uses pulses of light to measure topography — will require a separate payload, however.

Photogrammetry can be broadly divided into two categories:

Each style of photogrammetry can be used for land surveying, depending on the specifics of the job and attention to detail needed. Overall, however, metric photogrammetry is the more precise of the two and is recommended for surveying jobs that need centimeter-level accuracy. Both styles depend on specialized mapping software to stitch together images into a photogrammetric map. 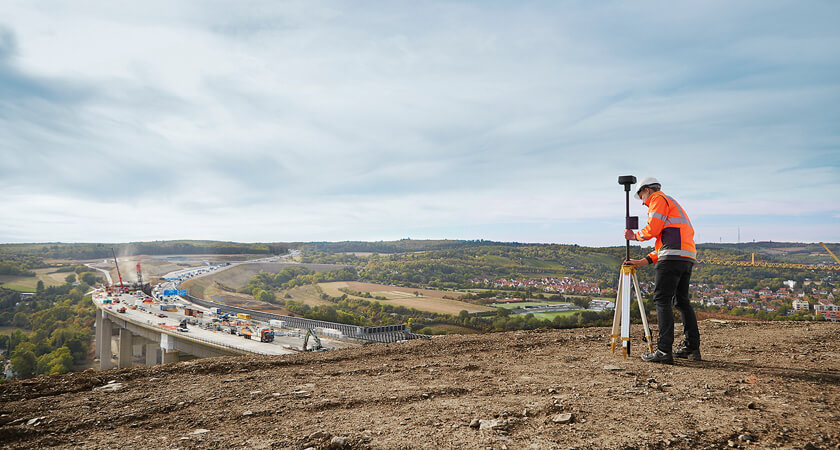 Despite advances in technology, terrestrial surveying can still be challenging and complex. Traditionally, surveying professionals have relied on tools such as total stations, GPS receivers, and ground laser scanners to acquire high-resolution spatial data on land surface topography. This can take an extensive amount of time and manpower, adding cost to surveying projects and diverting workers from other tasks. In some cases, terrestrial surveying can even be dangerous for employees, particularly when working on sites with steep or remote terrain that’s challenging to get to on foot.

Photogrammetric mapping from drones, however, allows land surveyors to accomplish more in less time. Surveying jobs that would typically take weeks to complete can be finished in a matter of days with drones. As such, using drones can prove to be significantly cheaper for many projects.

Because drones can be deployed rapidly, just about anywhere, their use eliminates the need of sending surveying crew into hazardous areas, like rooftops, ledges, roadways, unstable soil, and steep embankments. Even inaccessible features, such as cell phone towers and treetops, can be mapped easily through the use of drones. 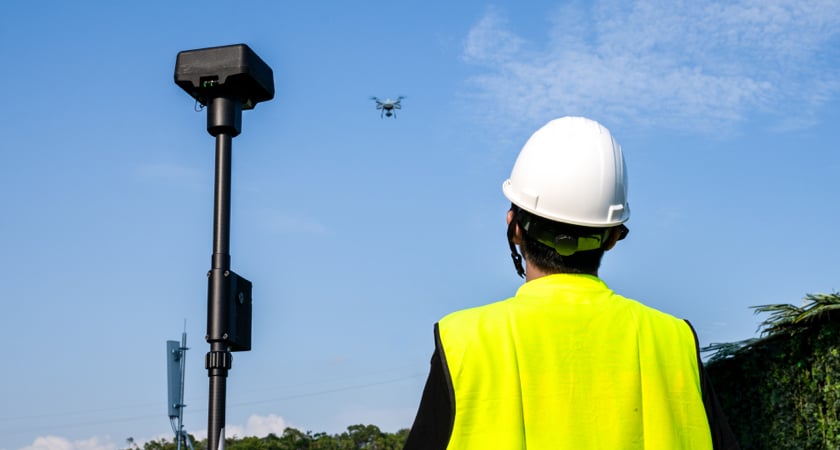 Proving the value in drone photogrammetry

While each of the advantages listed above deals with a drone’s ability to cut project time, danger, and cost there’s one more very important factor to consider: Are drones as accurate as traditional terrestrial methods? For many years, the reported accuracies from drones have commonly fallen short of their theoretical potential. This, however, has begun to change.

According to one recent study from the Journal of Unmanned Vehicle Systems, a drone with the right capabilities, like leading-edge unmanned hardware and conscientious data processing, is accurate enough to supplement or replace terrestrial survey methods for many applications, the researchers contended.

To support their hypothesis, these researchers triangulated a 4-acre church site seven times, using a DJI Inspire 2 drone equipped with a high-precision PPK GNSS system and a Zenmuse X4S camera. The site contained both smooth surfaces that drone data is known to model well (parking lots, fields, and rooftops) as well as features that are not expected to work well with aerial photogrammetry (walls, overhead wires, and the ground beneath vegetation). The researchers used data from stereo image pairs to fill in the missed or distorted features.

And even though the drone’s high-end positioning system meant that precision depended little on ground control, the team collected 23 well-distributed control points to compute the transformation for redundancy and to provide enough data for meaningful statistics.

Aerial data collection was completed in half a day of field time, with another day and a half of processing work. Conventional surveying and data processing, meanwhile, took three days.

With only a 2 cm vertical root mean squared error (RMSE), drone mapping turned out to be consistently and sufficiently accurate to be used for many applications typical of terrestrial surveying. The researchers also observed that the accuracy improved when the drone was flown at a lower altitude (albeit with diminishing returns). Had this been a typical terrestrial surveying project, using drones would have resulted in 33% time savings and 58% cost savings.

The researchers further studied the economic viability of drone mapping by conducting a rooftop survey for a solar panel installation. The team collected aerial data on three grocery store rooftops, ranging between 3 acres and 7 acres, in a single day. Without putting any workers on the roof, all features were extracted in stereo, including gas lines, roof vents, HVAC units, skylights, and electrical panels. While conventional terrestrial surveying would have taken 12 days from the project’s kickoff to the final delivery, ‘flight to delivery’ took only 7 days – realizing a 41 percent cost savings and a 58 percent savings in time.

In another example, the team collected aerial data for a full topographic–planimetric survey from a 260-acre golf course in one day. If classical methods had been deployed, three field crews would have taken 30 days to collect this data, leading to significant downtime for the course. Indeed, some heavily vegetated areas on the course required conventional surveying, but the drone was able to map many semi-obscured locations via stereo compilation by selecting a suitable stereo model. Effectively, the entire site was mapped in 15 days, at a cost savings of 75% and time savings of 50%. 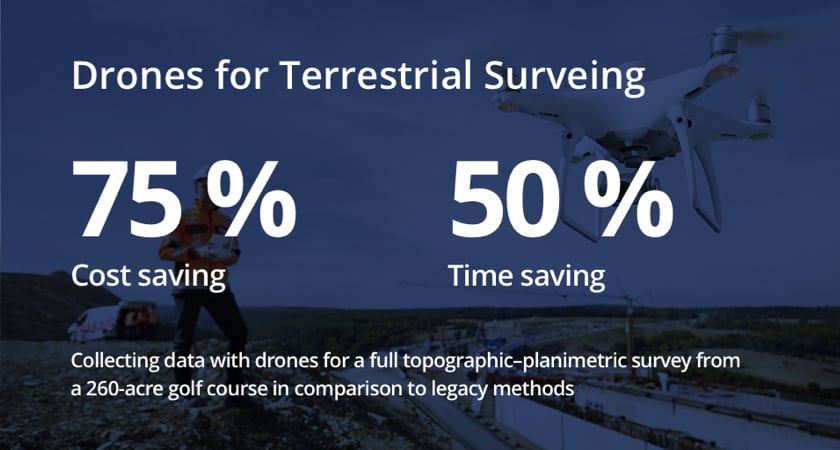 So can drones be called accurate, effective tools for land surveying? The answer is an emphatic yes. Not only that, the Journal of Unmanned Vehicle Systems study clearly demonstrates the cost- and time-saving potential of the technology, a consideration that should never be lost on surveyors.

Other applications for drone photogrammetry

At this point, we’ve established that drones can have an outsized impact on surveying projects, potentially cutting entire days off of a job. Land surveying, however, isn’t the only field where UAV photogrammetry is having a transformational impact. Other sectors include:

In almost any industry that values accurate measurements a UAV could potentially be used as an asset.

It’s clear that today’s drones have become an extremely valuable addition to a land surveyor’s toolkit and are increasingly supplementing or replacing terrestrial survey methods for many applications. To ensure you’re getting the kind of accurate results you expect, however, you not only need to use proper drone surveying methods — but you also need the best equipment.

Next-generation mapping drones, such as the DJI Phantom 4 RTK, are allowing surveyors to achieve centimeter-level data accuracy while requiring fewer control points. Top features of this drone include a centimeter-level positioning system, a TimeSync system to ensure data accuracy and a one inch, 20-megapixel CMOS sensor. Near-exact coordinate accuracy is made possible through 1cm+1ppm RTK horizontal positioning accuracy, 1.5cm+1ppm RTK vertical positioning accuracy and a maximum of 5cm absolute horizontal accuracy of photogrammetric models. Combined with a powerful photogrammetry camera payload, like the Zenmuse P1, you have an ideal setup for land surveyors.

Of course, even the best drone is limited by the mapping software you use with it. Powerful solutions such as DJI Terra help convert your photos into actionable 2D orthomosaics and 3D models.

To learn more about the DJI drone and payloads that are right for your organization, check out our surveying buyers guide. If you wish to read the complete report with detailed testing methodology and accuracy results, access it for free here.

Interested in drone technology but don’t think it can have a commercial application for your business? Think again. Drone operation for commercial purposes is having an outstanding impact in...
END_OF_DOCUMENT_TOKEN_TO_BE_REPLACED

How accurate is accurate enough? If you’re like most land surveyors, the answer is “as much as possible.”
END_OF_DOCUMENT_TOKEN_TO_BE_REPLACED

Picture a scene that’s synonymous with the climate crisis.
END_OF_DOCUMENT_TOKEN_TO_BE_REPLACED

The day of the drone is here. Drone technology is more advanced and capable than ever before, and innovators and pioneers across a variety of industries are learning how to put commercial drones to...
END_OF_DOCUMENT_TOKEN_TO_BE_REPLACED