Powerline inspection was once one of the most challenging things you could do with a flying robot. It is also one of the most rewarding applications of modern drone technology. With corrosion, loosening of bolts, adverse weather, or even nesting from birds, any amount of things can go wrong.

Power transmission and distribution (T&D) companies are legally mandated in several US states to conduct visual inspections. Early detection allows issues to be addressed before they arise, which can help ensure customers get their power.

As a leading manufacturer of custom-engineered T&D poles, US-based Valmont Utility is considered an authority on high-quality inspection of powerline structures. Traditionally, the company has conducted these inspections manually, a process that is as demanding and tedious as it is expensive and risky. But as industrial drones emerged as an efficient and cost-effective alternative to conventional inspection processes, Valmont lost no time in embracing the technology. 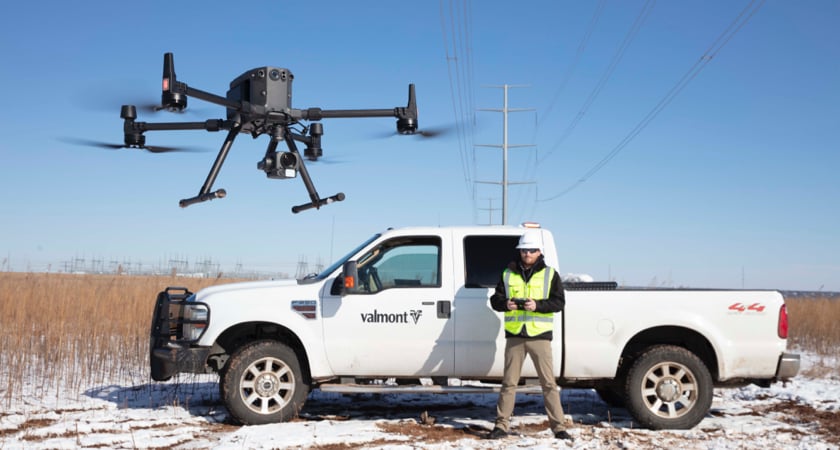 The company officially kicked-off its drone program in 2018, after spending nearly a year running trials on the DJI Matrice 200 Series platform. Their team, by then, had gathered enough data-backed evidence to prove that leveraging drones was as good as, if not better, than hoisting nondestructive testing (NDT) technicians up on a crane for manual inspections.

While negating the safety risk for engineers working at height around high-voltage powerlines was incentive enough for Valmont to incorporate drones into their operations, the company soon realized there were several other advantages to keep ‘an eye in the sky’.

“Over the last 2 years, we have switched roughly 70 percent of the inspection work over to drones,” says Jake Lahmann, Quality – UAS Manager, Valmont Utility. “This has increased both the quality and speed of our inspections, and we can offer more accurate, actionable reports to the customers. Even more impressively, we have saved a ton of money, literally millions of dollars, for our clients.” 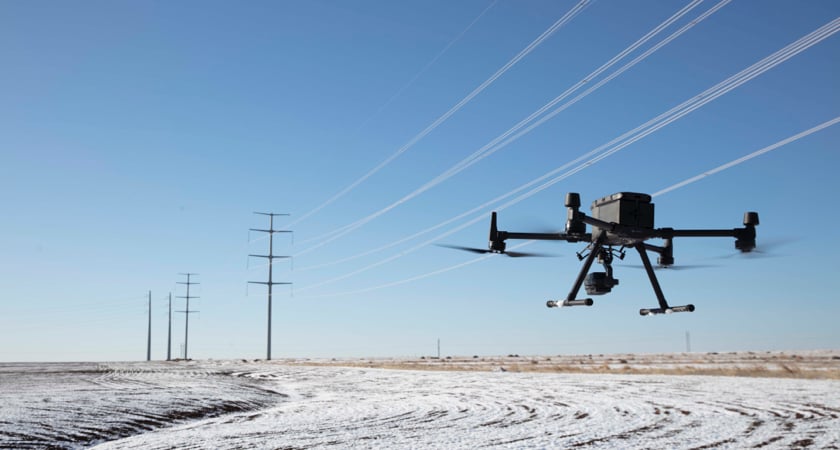 Utility poles are often located in very rough and remote terrains – think steep slopes, marshy areas, or even undulated lands with no roads. Getting heavy equipment like cranes to some of these locations can be extremely difficult and, hence, expensive. In some instances, Valmont has had to take help from bulldozers to pull up a crane and place it near a pole!

But with drones, the company has to send only a two-person crew – drone pilot and camera operator – to ensure optimal findings from each inspection. The highly-trained and experienced NDT inspectors comb through the high-resolution data back at the office and provide the customers with a strategic plan for asset maintenance and repairs.

Capturing the right data, however, is not as easy as it sounds. The UAV must be hardened against electromagnetic interference (EMI) from high-voltage lines and the pilot must be trained to ensure that the drone is flying at a safe distance at all times – even during unfavorable weather conditions.

“We, typically, do not operate in the best of the conditions. It is dusty, wet, and even physically exhausting for the guys,” Lahmann points out. “West Texas, for example, is both muddy and hilly, and requires us to brave strong winds.”

A drone that is not designed specifically to perform in such conditions could very well end up damaging customer property. This has been a major concern for both the management and the pilots at Valmont before every flight, Lahmann admits. “A single mistake could mean replacing 20 miles of optical ground wire (OPGW), which is installed at the top of transmission towers, can cost several millions.”

While Valmont’s standard operating procedures cover in detail how to handle a drone if it succumbs to EMI, the company has now turned to a formidable machine that combines high-performance with unrivaled reliability: the Matrice 300 RTK with Zenmuse H20 Series payload.

A seamless solution for inspections 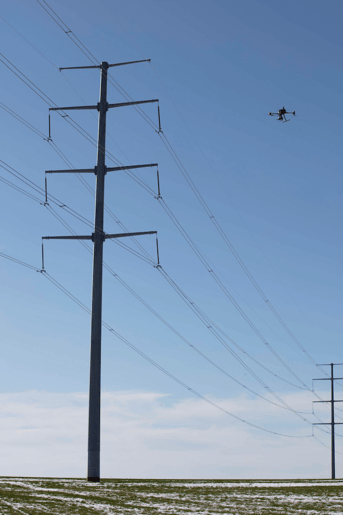 DJI’s safest drone platform yet for utility inspections, the M300 RTK not only provides protection from EMI, but it is also equipped with a next-gen collision avoidance system. Right from its rugged travel case and inverted propellers to its IP45 protection rating, the drone is designed to allow unprecedented agility and maneuverability – even in the high winds and harsh environments of West Texas.

The design revamp also means that pilots can deploy the drone and reach their targets faster than ever before. “Getting to a tower quickly for live inspections could very well save lives during natural disasters, when every second counts,” Lahmann says. “Let’s not forget that it’s not just powerlines that we inspect, but also communication, police, and EMS (ambulance and hospital) towers.”

Live inspections also benefit from the new transmission system on the M300 RTK which promises outstanding picture quality even from afar.

Since OcuSync Enterprise gives pilots the longest and most responsive connection to their drone and its payloads, the Valmont crew can stay further away during routine inspections of structures located in difficult terrains as well. “We can simply fly to a structure versus driving to it,” Lahmann quips.

These design changes and the improved focus on safety and transmission have been monumental for Valmont inspectors. But they are not the only reasons why Lahmann believes that every new drone the company purchases now is going to be an M300 RTK with Zenmuse H20 multi-sensor payload.

Up to 55 minutes of flight time and hot swappable batteries on the M300 RTK have dramatically reduced the amount and time of battery swaps needed throughout the day. It has also cut down on the team’s downtime.

The Valmont crew has been able to gain more than 80 minutes each day as time-savings on the job. This effectively translates into a minimum of one additional structure getting inspected that day, and oftentimes two. 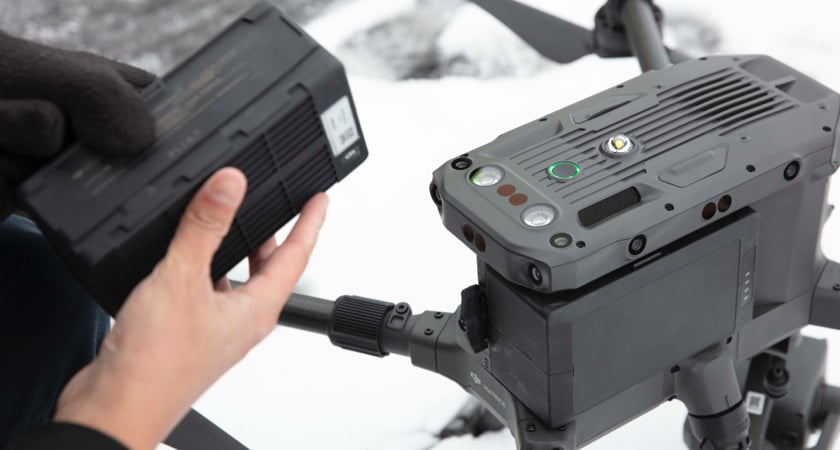 The time-savings also come from DJI’s first hybrid sensor solution – the Zenmuse H20 Series. As the camera offers 20 MP Zoom and 23x Hybrid Optical Zoom, Valmont engineers no longer have to fly as close to an asset as they used to before, in order to get highly-detailed imagery. The crew can simply frame an area of interest in a wide camera view, and the zoom camera will automatically capture a set of 20MP images of the area.

“That feature alone saves us about 10 minutes on each structure,” tells Lahmann, adding that the higher resolution and increased zoom levels have empowered NDT inspectors to identify even the slightest of defects, which is critical for utility and communication infrastructure inspections. 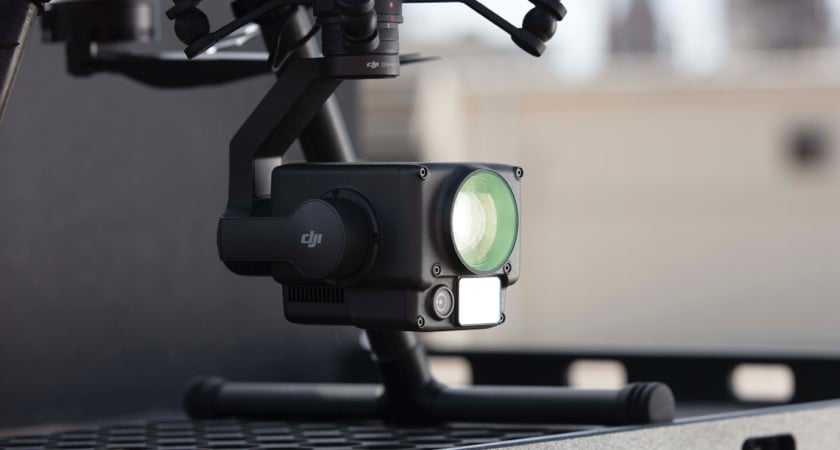 These gains in efficiency will only increase once the team unleashes the full power of AI Spot Check – a new feature that allows the drone to replicate the position, angle, and framing of interest areas for future missions.

Admitting that he foresees this feature as a game-changer, Lahmann says, “While some inspections are conducted annually, other projects require us to reinspect a structure every quarter. AI Spot Check will allow us to truly compare apples to apples and tell our customers with foremost confidence whether everything is A-OK or not.” 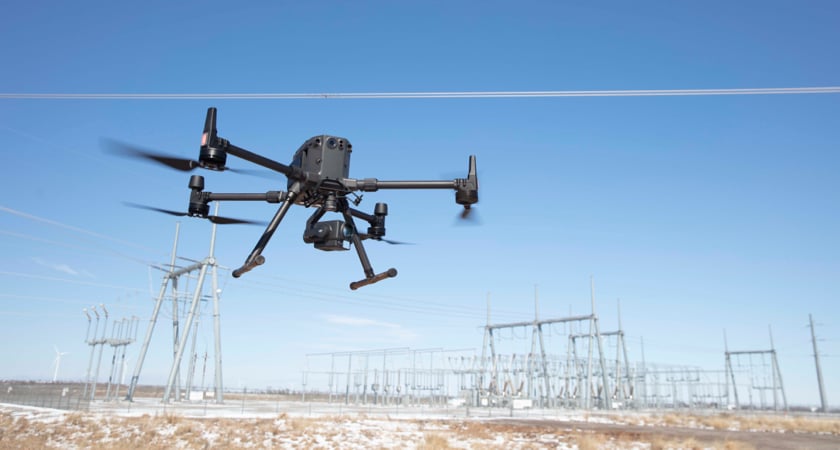 Future of inspections at Valmont

Valmont Utility wants to continue to push the envelope for contactless inspections of critical infrastructure. The company is investing heavily on enhancing data analytics, but Lahmann is quick to mention that this will not dilute the importance of NDT inspectors. “We don’t want to remove the human element, we only want to make it better.”

Valmont has also patented four different robotic arms that it plans to use in combination with drones in the future. Further, as a global manufacturer of power structures, Valmont is also installing smart sensors in T&D towers to provide a persistent level of health information to customers. So, if there is an ice storm or the sensor reports that a heavy vehicle may have crashed into a tower, the company can quickly alert the customer and conduct a timely inspection using a drone.

“Overall, the M300 RTK with Zenmuse H20 Series payload has increased our efficiency by at least 30 percent. This means that this drone is not just a purchase for us; it’s an investment that would pay for itself.” - Jake Lahmann, Quality – UAS Manager, Valmont Utility

A Custom Drone Solution for Nuclear Facility Maintenance
in Energy

We are now inching toward a place in time where most people begin to wonder: why did I make that New Year’s resolution? Well, we may not be able to help you out much in your pursuit of a “newer,...
END_OF_DOCUMENT_TOKEN_TO_BE_REPLACED

For most households, energy bills are a consistent and expensive outgoing. These costs peak during the winter months when the cold arrives. The U.S. Energy Information Administration predicted that...
END_OF_DOCUMENT_TOKEN_TO_BE_REPLACED

Delivery drones could very well be The Next Big Thing for businesses to deliver goods to their customers. They can also be extremely helpful in transporting sensitive items such as medical supplies...
END_OF_DOCUMENT_TOKEN_TO_BE_REPLACED

When road accidents occur, public safety personnel will often need to document the scene. This critical step, also known as accident reconstruction, is a delicate balancing act between accuracy and...
END_OF_DOCUMENT_TOKEN_TO_BE_REPLACED