The path to becoming a commercial drone pilot

Welcome to our Pilot Profile series. Here we tell the story of some of the most industrious, courageous, and inspiring commercial drone pilots and how they got to where they are today. 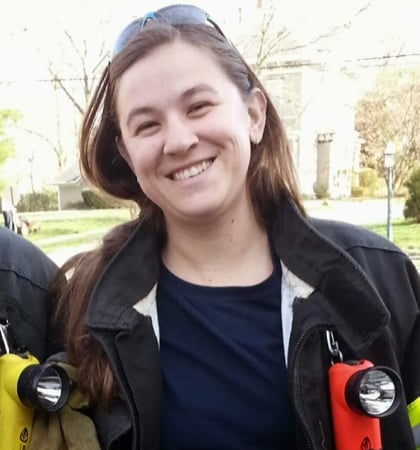 For Woodlawn Fire Department’s Risk Reduction Officer and UAS Program Manager, Katie Thielmeyer, it began with her father, a Proctor and Gamble Engineer, who taught her about automobile maintenance long before she could drive. As she mentions, “his advice was always practical, and you never doubted the love behind it.”

It was her mother, however, who would play the key inspirational role that led Katie towards a life of public safety. Katie’s mother was never afraid to take on challenging careers which, over her life, included getting her Commercial Driver License and becoming a tractor/trailer driver, or becoming a lifeguard and swim instructor. Most importantly, when Katie was still very young, her mother became a licensed paramedic and certified firefighter. 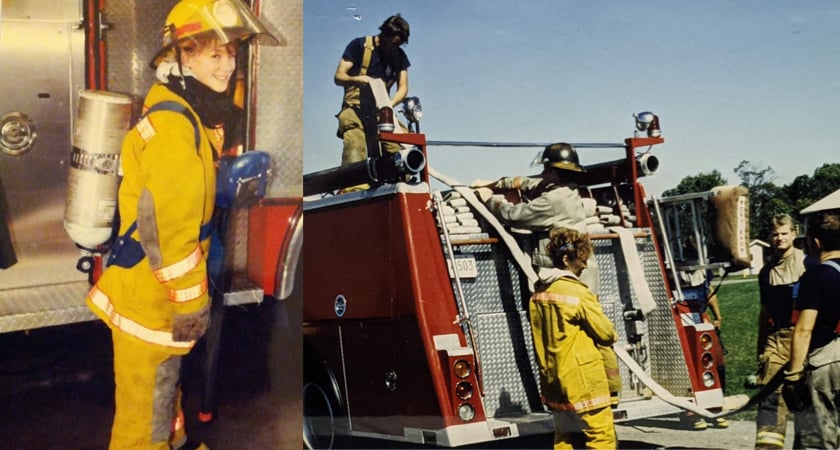 “Occasionally I would spend the night at the firehouse. I would hang in the kitchen and eat with the crew. I’d make my bed on the top bunk and when they would get called out on a run I would watch as they went down the fire pole and drive off,” Katie fondly recalls.

With a smile, Katie remembers how “every 4th of July, mom would drive the Engine in the parade and I’d get to run up and give her a kiss as she drove by our spot.”

Katie’s mother was a shining example to her in a time when women were still pushing to enter into public safety. Katie’s friends would often point out to her that her mom was “different than other moms” because she was so strong and brave, like a true-life Wonder Woman. Katie said her mother always told her that she was beautiful and powerful and that she could do anything in life.

A winding and diverse career path

Even with this strong figure in her life, Katie did not immediately look for a career in public safety after high school. Instead, Katie chose to travel for a while before marrying and settling down in the Cincinnati area where she raised her three children.

During this time she became a birth photographer, capturing moments of labor and delivery, teaching herself through trial and error how to use her camera in unusual settings such as low light conditions where a flash would not be welcome.

Katie soon took on another role, that of running her sister’s online baby carrier business. “I taught myself web design and gave the site a makeover. I taught myself marketing techniques and how search engines worked,” Katie mentions. “Over time I created several more wholesale accounts and became an authorized seller of many different products from baby carriers to high-quality wooden toys. There became a point in time where the business grew too large for me to handle on my own, but I was not in a position to hire and oversee employees. It had been an amazing experience and was a bittersweet decision to part ways.”

Now, as a single mother, she began looking at career options which included considering furthering her education for a career in marketing.

It would ultimately be a conversation with a friend from high school that worked in Colorado as a flight medic that would finally lead Katie to a career in public safety.

Enrolling in Emergency Medical Technician (EMT) school, Katie worked hard and achieved this milestone. Next, she proceeded to the University of Cincinnati's paramedic program for intense studying, skills training, and clinical rotations. Unfortunately, during this time Katie began to feel dismayed by the limited choices of where to work as a paramedic. Working for a private ambulance on non-emergency calls, or in a hospital setting, sounded dull to Katie. She desired the excitement that came with emergency calls. And one way to ensure she would receive these emergency calls was to become a firefighter as well.

Firefighting in her sights

Katie now began to set her sights on this next goal. “I knew that if I was going to become a firefighter, I had to train well in advance. 31 years old and in the gym for the first time in my life was an experience all of its own. Thankfully, I had a good friend offer to be my trainer and he showed me the ropes. I spent 6 months lifting weights and improving my cardio. He would often set up a fire department physical agility course for me to practice on so I would be prepared for the employment process.”

Storming through the rigors of the fire academy, Katie was able to achieve what few are able to, she became a firefighter and nationally certified paramedic. 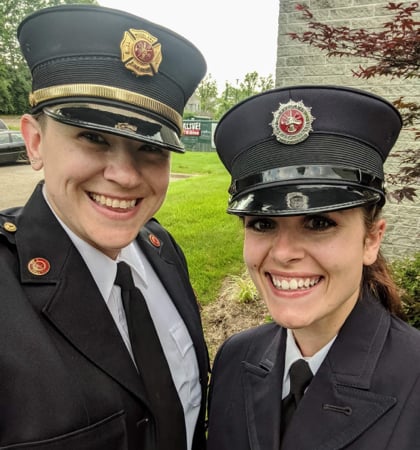 A few months later she built on her success and was hired to work as a part-time firefighter for several fire departments, juggling single mother life as a working mother rather than as a student.

Unfortunately, her time on shift would be cut short due to an on-the-job injury, leaving her only able to work “light duty” while she recovered. She was luckily able to do so at one of her part-time employers, Woodlawn Fire Department.

Assigned the task of revamping the fire prevention and inspection program, Katie recalls “My computer skills paid off and I was able to get things up and running quickly.” 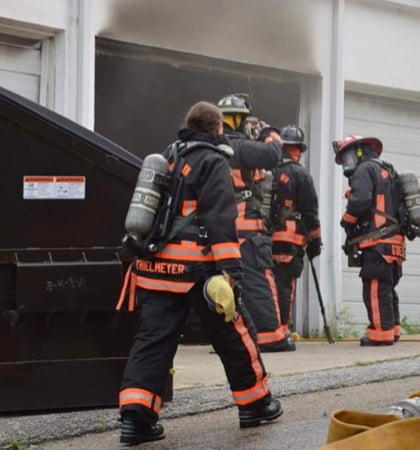 In fact, Katie had excelled so well at this task that she and the fire chief then began to work to create a Community Risk Reduction program from the National Fire Protection Association’s (NFPA) about to be published NFPA 1300 Standard on Community Risk Assessment and Community Risk Reduction Plan Development. This work would ultimately lead to a full-time position for Katie, while not as exciting as being a front-line firefighter/paramedic, would definitely still let her continue to help the department and those she served.

It was this position that led Katie to drones. The city received a grant from the Bureau of Workers’ Compensation for two things:

1) Outfitting the ambulances with powered cots, and

2) Starting a drone program with the remaining funds.

Again, the fire chief tasked Katie with building this program because of her ability to research, learn, and ultimately succeed at difficult tasks.

Katie laughs and recalls that “At this point, I had never, in my entire life, had any interest in drones or considered building something like this. But, of course, I was all in! With absolutely no knowledge of drones or flight in general, I found myself building a hexa-copter. I taught myself how to solder, how to program the motors, and how to program the remote. I also obtained my Part 107 license. Then I learned how to fly.” 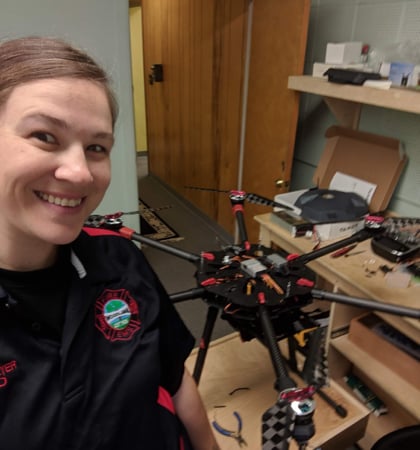 Through this learning process, Katie began to identify gaps in her drone program. “It was really amazing and cool to build this thing and learn how to fly drones, but I was concerned about the rules and regulations and policies. How could we utilize this technology and manage the risks to benefit public safety? So, I started to research UAS programs around the country.”

Many in public safety at this time found themselves in a similar position as Katie: thirsting for more knowledge on drones. This still-emerging technology had and has untold potential for public safety, but Katie recognized the need for policies, and more importantly, standards. Specifically for skills training.

Katie recounts, “I requested policies and pulled everything I could from the internet. I learned about a Public Safety UAS conference that was happening just 8 hours from us the following month. That’s when another piece fell right into place. The Assistant Chief put us in contact with a family friend who was involved with drones for the LA City Fire Department. We had a face-to-face when he was in town and he introduced us to the National Institute of Standards and Technology (NIST) standard test methods.”

Attending this conference changed everything for Katie. Now she had direct connections to departments around the world that were already doing what she was hoping to accomplish. She now had the support and guidance from other public safety drone program managers as well as having the new NIST test methods.

Katie didn’t stop there. Not only was she able to return to Woodlawn Fire Department and improve their program, but she also became an important figure in the public safety drone community. Katie has since gone on to develop training programs, assist with NIST testing, speak at conferences about drone programs and NIST testing, and so much more. 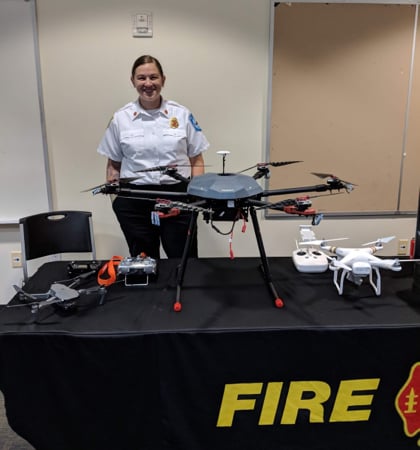 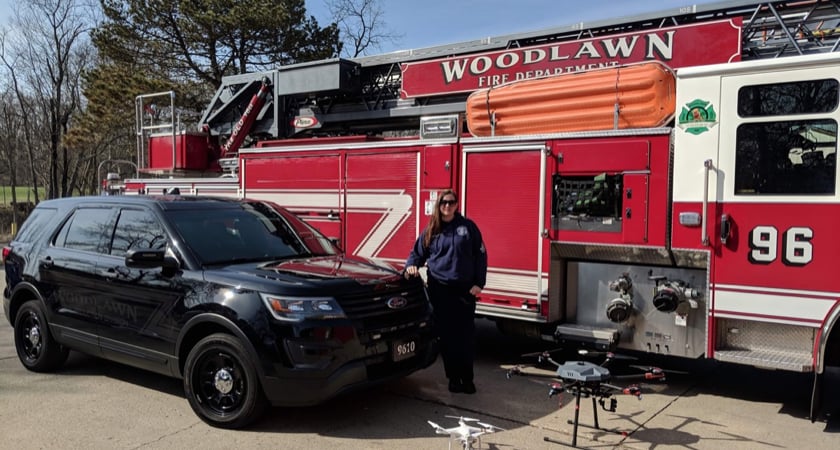 Katie sees drones today as an integral part of reducing risk to our public safety personnel and those we have sworn to protect. As she so poignantly points out, “There is no question that drones are a game-changer for public safety. First and foremost, they have improved the safety of the first responders. The simple concept of situational awareness is brought to a whole new level when drones are involved. The view from the sky provides valuable information, whether it be to evaluate structural integrity on a burning building or threats to law enforcement during a riot, and I believe, at some point, it will be considered negligence for a public safety department or entity to not have a drone program or have access to one.”

In our modern times, fewer people are seeking careers in public safety, for many reasons. Our communities are extremely fortunate to have dedicated professionals like Katie Thielmeyer who are never afraid to tackle challenges and improve their response capabilities, especially as they seek to adopt drone technology as a way to save more lives.

About the Author Chief Wayne Baker

Wayne Baker is a 26 year veteran of the fire service and recently retired after 10 years as the Fire Chief and Emergency Management Coordinator for the City of Joshua. Throughout his career he consistently sought out new technology that could save the lives of the public as well as public safety personnel. Over the past five years he operated UAS on numerous fires, rescues incidents, assisted on law enforcement operations, as well as disaster response. He serves as one of the founding members of the North Central Texas Public Safety UAS Response Team (PSURT) with whom he has deployed to such disasters as Hurricane Harvey and most recently the Dallas Tornado Incident of October 20, 2019.

#DronesHelp : How Can Police, Firefighters and Search and Rescue Professionals Use Drones to Keep the Public Safe?
in Public Safety

Interested in drone technology but don’t think it can have a commercial application for your business? Think again. Drone operation for commercial purposes is having an outstanding impact in...
END_OF_DOCUMENT_TOKEN_TO_BE_REPLACED

How accurate is accurate enough? If you’re like most land surveyors, the answer is “as much as possible.”
END_OF_DOCUMENT_TOKEN_TO_BE_REPLACED

Picture a scene that’s synonymous with the climate crisis.
END_OF_DOCUMENT_TOKEN_TO_BE_REPLACED

The day of the drone is here. Drone technology is more advanced and capable than ever before, and innovators and pioneers across a variety of industries are learning how to put commercial drones to...
END_OF_DOCUMENT_TOKEN_TO_BE_REPLACED