Why Shell is Using Drones for Oil and Gas Refinery Inspection

The site has its own security team, medical facility, and fire stations, as well as a railroad, shipping docks, and pipeline networks to connect its products to the outside world. Smokestacks and flares dominate the Deer Park skyline. 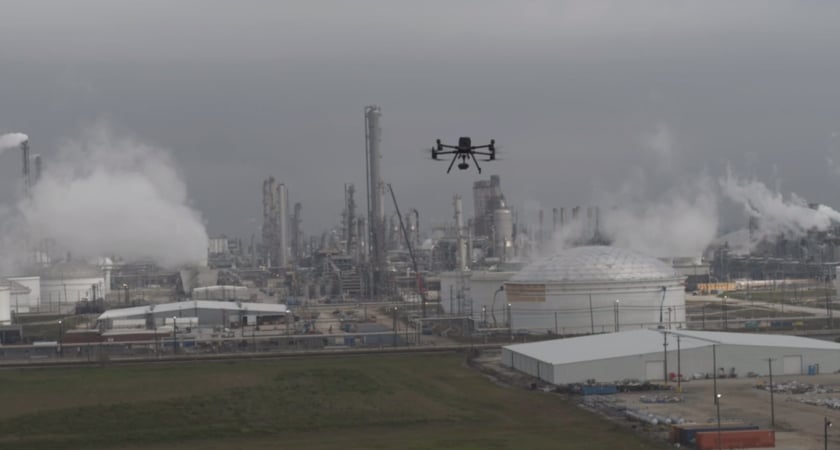 At first glance, this is an intimidating place to work. Particularly for the engineers tasked with maintaining all of this industrial equipment.

Since the summer of 2016, the team at Shell Deer Park has been using drones to reduce the need for daunting, dangerous climbs; improving safety and cutting the cost of inspections in the process.

Aerial inspections and the birth of a drone program

The catalyst four years ago was a loose railing at the top of a 260ft stack. It just so happened that a week before, the security team had been given a demonstration of what drones were capable of from a local UAV specialist.

Rather than get a crane onto the site and send a maintenance crew up for a closer look, the UAV team was invited back to help with a live situation.

As Shell Deer Park’s Chief Drone Pilot, John McClain, recalls, “Within fifteen minutes, they were able to provide a good video of the specific handrail. The engineer was able to look over their shoulder the whole time and carry out the inspection that way.”

The only downside was the size of the invoice that arrived the next day. It was clear that taking things in-house was the best way forward.

At the heart of Shell’s drone program is a simple aim: to harness the mobility and perspective provided by drones and prevent putting staff in harm’s way until it’s absolutely necessary.

“The big thing is safety: anytime you can put a piece of equipment at height and not a person, that’s a plus. That’s how we’ve written our policies for the site,” says McClain.

Since 2016, Shell’s drone operations at Deer Park have grown from a two-man team to one that’s pioneered UAV SOPs for the company’s sites worldwide. McClain now oversees seven qualified pilots and a fleet of DJI aircraft, while working closely with Shell’s aviation departments and Robotics Theme Lead Adam Serblowski to integrate new hardware and applications.

As is common in dynamic industrial workplaces embracing drone technology, the missions McClain’s team take on are a combination of scheduled inspections and incident response. Flare tips and floating roof tanks are two examples of Deer Park infrastructure that require scheduled inspections; their condition and activity are difficult to assess from ground level.

Steam system leaks and other abnormal situations require an eye in the sky. Procedures are in place to ensure the drone team is in the loop when they do crop up.

“We’ll get a phone call or it’ll be mentioned in the site’s morning meeting,” McCain explains. “I’ll hear first hand what the engineers need and we can quickly put a mission plan together, do the risk assessments, and have a drone up in the air within 20-30 minutes.”

Whether or not the mission is planned in advance, the constant is that Shell engineers are always on hand to guide the flight and assess things in real-time. “I want the person requesting the inspection to be a part of it,” says McClain.

The on-site fleet has evolved from consumer-grade DJI Phantom 4s and Inspire 1s in 2016 to enterprise models, including the Matrice 200 Series. Yet the environmental and operational challenges faced by McClain’s team mean there hasn’t been a well-rounded solution for the majority of missions - until now.

For a number of reasons, arguably the single biggest challenge for the Deer Park drone team is proximity. 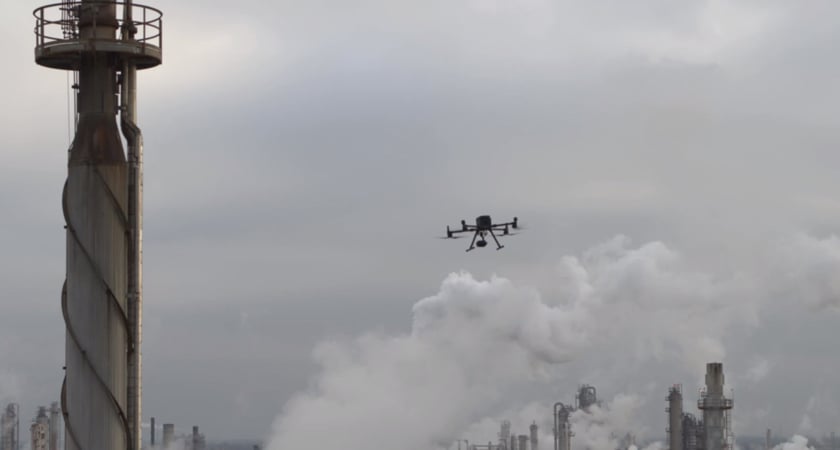 Inspecting structures and navigating steam pipe systems is typically a balancing act. Pilots have to get close enough for a clear view but remain at a safe distance - something that’s central to the team’s established SOPs. These proximity rules minimize electrical and magnetic interference and reduce the chance of the drone’s obstacle detection systems disrupting the flight path.

The M300 and H20 payload offer three solutions to that particular challenge. First is the H20’s Laser Rangefinder, which is precise up to a distance of 1200m.

“We don’t fly closer than 50ft to any piece of equipment. Before the M300, that was always a guess. Now we have the rangefinder to let us know when we can’t go any further,” McClain explains.

Second is the H20’s 20MP zoom camera with 23x optical zoom. This new capability allows the team to get a close-up view from a distance, without sacrificing image quality.

“The biggest plus of the M300 that I will endorse for as long as it’s around is the H20,” says McClain.

“Using the full digital zoom, you’re still getting a crystal clear picture of what you’re trying to look at. You’re getting every detail you could ever want.” 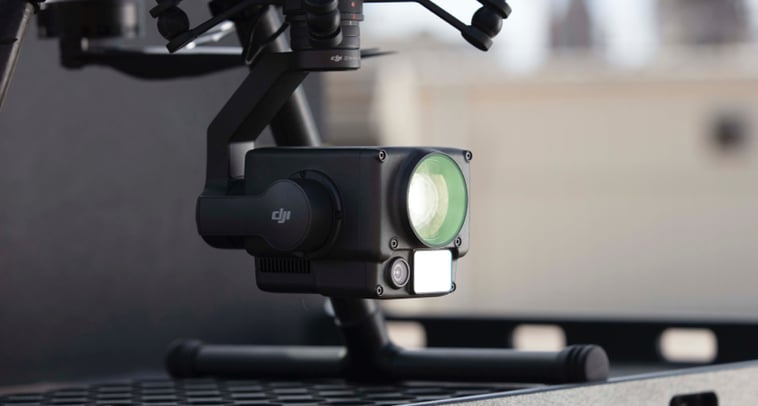 The third solution to the crew’s proximity issues is the M300’s new omnidirectional obstacle avoidance system. Its new dual visual and Time-of-Flight sensors provide peace of mind in challenging environments.

McClain uses the inspection of pipe racks as an example. “The drone is able to self-correct and fly between objects before coming back down to the altitude it’s supposed to be flying at. We no longer have to worry about the drone just stopping after detecting an obstacle and putting the pilot in a tricky situation.”

The details that combine to form a comprehensive solution

With countless hours behind the controls of DJI’s M200 Series, some of McClain’s favorite aspects of the new platform are small tweaks that will make a big difference to everyday operations and the smooth running of the Deer Park drone program.

The extended flight time of the M300, which can stay airborne for 45 minutes at a time when flying with the H20, is ideal for demanding missions. But, for McClain and his team, the fact that you can quickly hot-swap the TB60 batteries without disrupting the mission is just as valuable. It also removes the risk of unexpected and inconvenient firmware updates.

“The M300 comes out of the box with a maintenance program and software that monitors the motors and different functions on the aircraft. I now know exactly how many hours are on each motor and each motor’s performance,” says McClain.

For both regular inspections and emergency response, the ability to repeat missions with precision is invaluable. Human error and even minor changes in flying conditions can lead to inconsistent results.

The M300 RTK’s new AI Spot-Check tool has been designed to solve that problem. By combining visual machine learning algorithms with the centimetre-level precision of the built-in Real-Time Kinematic (RTK) system, teams can automate routine inspections, safe in the knowledge that the right data points will be gathered, time and again.

McClain believes the feature will be useful in all manner of scenarios. “Following a hurricane several years ago, we had a large steam leak. The only way the engineers could keep an update on that leak was using the drone, taking a picture every thirty minutes. We used the GPS and tried to keep the same camera pitch and angles, manually.

Now, with AI Spot-Check, we’ll be able to take the pictures the first time, hit a button, and have the drone go back to gather the same data independently and accurately.” 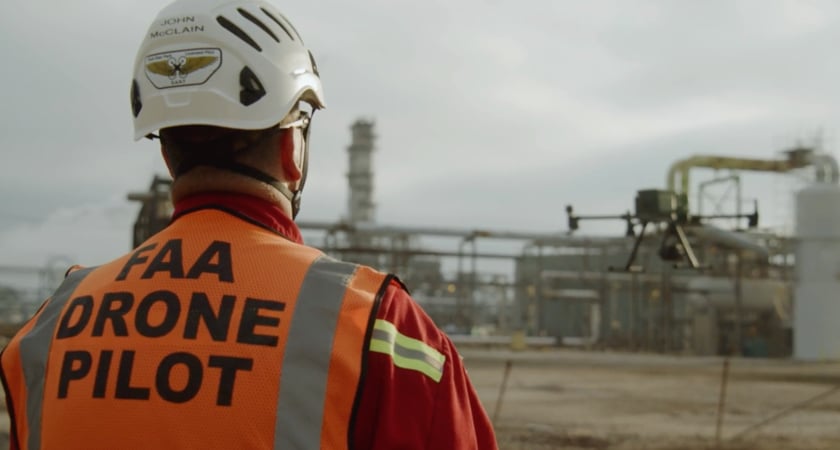 Having already reduced the time and money required to carry out manual inspections, the latest AI tool from DJI looks set to cut the manual elements out of even that process.

With weekly inspections of 47 floating roof tanks, it's as simple as setting the desired angle for each tank.

“There’s no more guessing. We can get the same picture of the same tank every week, which makes it a lot easier to compare any issues and make smarter maintenance decisions,” says McClain.

The final feature McClain touches on is another small but significant iteration. The M300 RTK has an Ingress Protection (IP) rating of 45, meaning it can work safely in light and medium rain. Click here to learn more about the M300 RTK.

“The improved IP rating helps us with emergency response,” says McClain. “Knowing that we can assess an incident in most weather situations puts us at ease. During our last serious weather event - Hurricane Harvey - we had to wait for the rain and wind to almost stop before we could start flying. We won’t have the same issue next time.”

The future of drones in industrial inspection

All the signs point to drones becoming increasingly prevalent on sites like Shell Deer Park. The benefits in terms of safety and cost are clear and persuasive. And the quality of the data gathered grows more compelling with the launch of platforms like the M300.

It’s only a matter of time before these flying robots work more independently, beyond visual line of sight (BVLOS) and without the need for direct supervision.

A Custom Drone Solution for Nuclear Facility Maintenance
in Energy 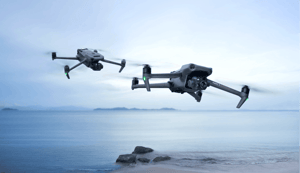 The Mavic 3E (M3E) is a compact, portable, and powerful drone for everyday operations. Whether you’re a hobbyist pilot ready to go pro or searching for a versatile platform to bolster your commercial...
END_OF_DOCUMENT_TOKEN_TO_BE_REPLACED 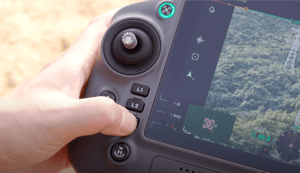 With every platform and payload innovation, DJI Enterprise expands what is possible for first responders, inspection crews, surveyors, and other industrial users. With each iteration, the features...
END_OF_DOCUMENT_TOKEN_TO_BE_REPLACED 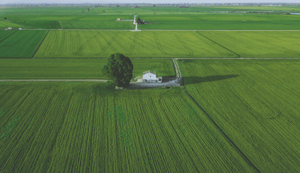 Why Use Real Estate Drone Photography?

Across industries, the use of drones is on the rise. This is because a drone can provide a new perspective, helping companies and individuals see things from new angles.
END_OF_DOCUMENT_TOKEN_TO_BE_REPLACED 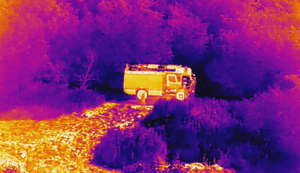 The list of use cases for uncrewed aerial vehicles (UAVs) is always expanding. Much of this growth is due to the development and refinement of valuable new capabilities and drone loadouts. For...
END_OF_DOCUMENT_TOKEN_TO_BE_REPLACED