What is Datum in Surveying?

Understanding horizontal and vertical datums, ellipsoids, geoids, and why they are important in surveying

Have you ever wondered where the coordinates on your GPS device come from? What about stats like sea level? These numbers are derived from datums — an essential part of any coordinate reference system and the backbone of so much of surveying.

Datums are used as the starting reference point for surveying jobs and put your work in a larger context. While a datum can be any reference used to measure an object — including planes, lines and points — in surveying they are typically points, called geodetic datums. There are two kinds of geodetic datum: horizontal and vertical.

To be useful in surveying, a geodetic datum must be based on a reference surface, which takes these points from an abstract idea to a set location on the Earth’s surface. Notably, there are multiple reference surfaces, depending on where you are and whether you’re measuring for a horizontal or vertical datum.

In order to understand the idea of a reference surface and properly find and utilize datums, you first have to know the difference between an ellipsoid and a geoid model of the Earth. An ellipsoid is an imperfect spherical shape. Unlike a sphere, however, the length, width and height of an ellipsoid do not all have to be identical, according to Encyclopedia Britannica. 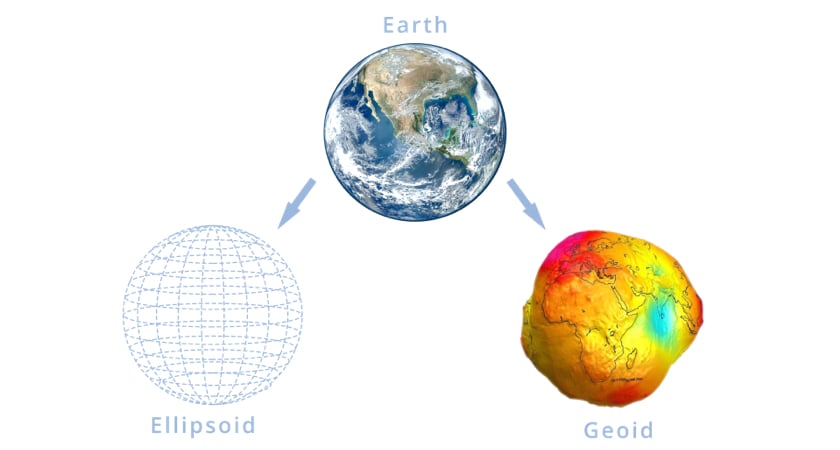 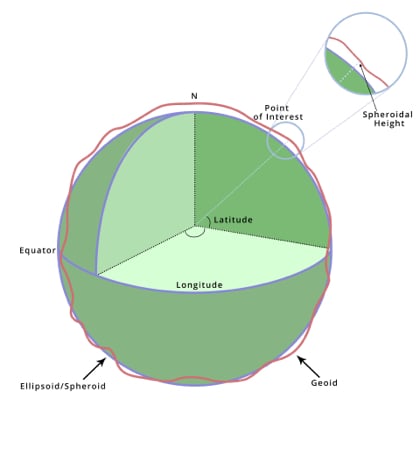 However, any cross-section plane of the shape must still be either an ellipse or a circle. The specific ellipsoid model that best replicates the Earth is called the earth ellipsoid. However, because ellipsoids are still completely smooth, unlike the Earth itself, they are typically referred to as being only a “best approximation” of the planet’s shape.

A geoid model of the Earth, meanwhile, adds some necessary complexity and gives a fuller representation of the way the Earth’s surface varies in elevation. Geoid models are based on Mean Sea Level — or the elevation of the planet’s sea level surface if the water were completely flat. Mean Sea Level is useful because water responds to the Earth’s gravitational pull and indicates dips in elevation on the ocean floor, according to the National Oceanic and Atmospheric Administration (NOAA).

While the earth ellipsoid is used for most situations, geoid models are conducted on a more local level. For example, the U.S. currently uses the North American Vertical Datum of 1988, or NAVD 88. This model originally took life as the National Geodetic Vertical Datum of 1929. NGVD 29 used physical tidal gauge stations in waters across the U.S., Mexico and Canada to extrapolate data. While today’s model is based on this work, NAVD 88 also takes advantage of satellite data for a more accurate measurement. Differences between the two systems are typically no more than a yard. 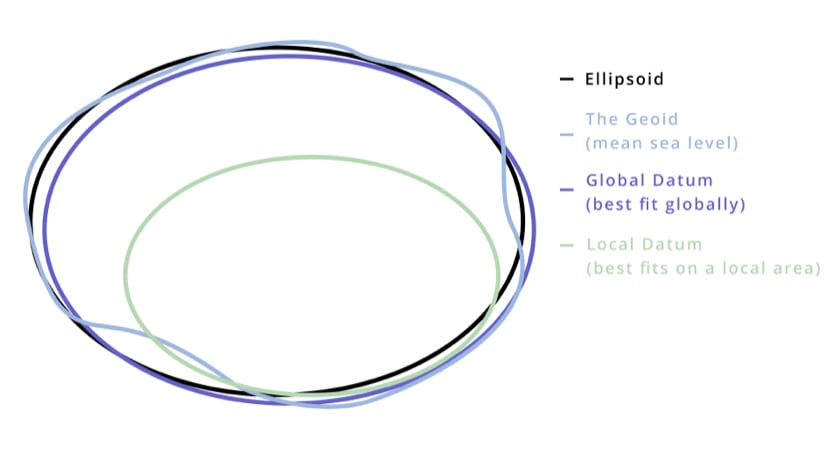 While geoid ellipsoid models are used to explain the shape of the earth, datums plot specific locations on each model, placing your surveying site in a larger, global context. As mentioned above, there are two types of geodetic datums — horizontal and vertical. Each relies on information from geoid and ellipsoid models to offer actionable information.

Horizontal datums use the ellipsoid model to plot a point on the globe without regard for elevation or depth. These points are known colloquially as longitude and latitude and are the basis for GPS coordinates. Your horizontal datum will not always be the same as these numbers, however (more on that below).

Horizontal datums are found by calculating location relative to the center point of the earth ellipsoid model. Since the Earth is not a perfect ellipsoid, this is known as “pinning” the earth ellipsoid to the actual planet. Because longitude and latitude are a worldwide global reference system, these numbers are dependent on a worldwide ellipsoid model. GPS coordinates, specifically, use a global model called the WGS 84. WGS 84 is a pinned model (experts believe it’s within 2cm of the Earth’s center) first released by the U.S. Department of Defense in 1987. In 1994, the Pentagon updated the model to be based entirely on insights from GPS data, according to the U.S. Forest Service.

While the WGS 84 is incredibly accurate across the entire planet, for precise readings down to the centimeter, you’ll want to use an ellipsoid model based on data points taken from a smaller area. Horizontal datums taken from these models are called local datums. While these models can be expanded out to an entire earth ellipsoid, the data will be inaccurate outside the geographic area they were created for.

The United States, for example, uses the NAD 83 model. The NAD 83 actually began as the NAD 27, which was based on an ellipsoid model from 1866 that used the approximate center point of the U.S., Meade’s Ranch Kansas, as a starting datum. NAD 83 used NAD 27 as a basis but added over 250,000 additional physical data points, as well as new satellite data. Since then, the model has been updated multiple times to take advantage of developing GPS technology. 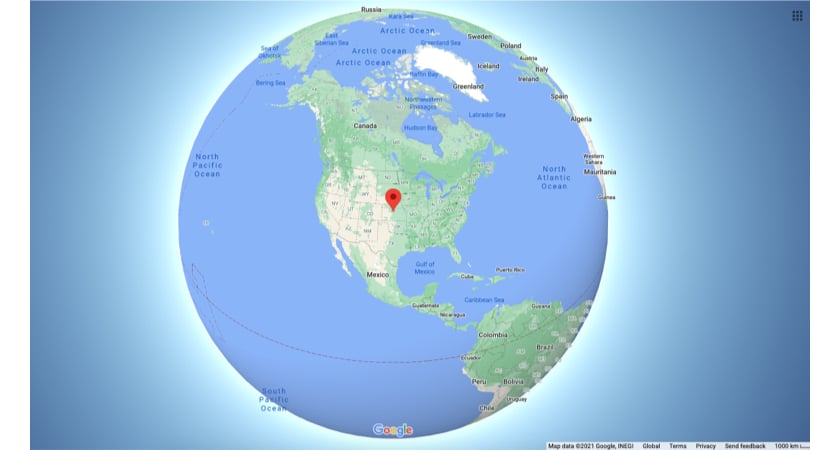 Because NAD 27 and NAD 83 came before WGS 84, the original global model is notable because it is actually based on this U.S.-focused local model. The updated WGS 84, which uses more advanced GPS data, has since made up for the small inaccuracies that resulted from such a model.

Of course, in most cases, you’ll also need accurate elevation information to complete your surveying job. For that, you’ll need vertical datums. Unlike horizontal datums, vertical datums are based on local geoid models of the Earth, like the NAVD88. There is also another form of vertical datum, called tidal datums, that is calculated by measuring the changes in water surface levels over a period of time. Since most surveying is land-based, this form of measurement is not usually applicable.

While calculating the vertical datums of your site are important, it’s only the first step to creating an accurate data set. Although your drone may stay at the same height, the distance to the ground will continually change because no site is perfectly flat. To keep your data consistent, you’ll need to convert the varying vertical datums from throughout your site into one orthometric height. Both the earth ellipsoid and your area geoid model are used to convert the vertical datum of a site.

Fortunately, this can be done using a simple formula:

The ellipsoid height is the difference between an ellipsoid model and your chosen coordinate on the Earth’s surface. If the WGS 84 can provide enough accuracy for your purposes then no additional calculations will be necessary to find this number if you are using a GPS receiver. Geoid height, meanwhile, is the offset value between the geoid model you’re referencing — such as the NAVD88 — and the earth ellipsoid.

The result of plugging these numbers into your formula is the orthometric height. This is the number that must stay consistent throughout all of your data.

The right drones and payloads for surveying

Now that we’ve covered how to look up a horizontal datum and use a vertical datum to ensure accuracy across an entire site, it’s time for you to upgrade your equipment to complete the job. Look no further than the Matrice 300 RTK. With rapid speeds and long-lasting batteries, this drone goes where you need it to. The ability to mount three payloads at once also makes it easy to collect data with as few flights as possible. 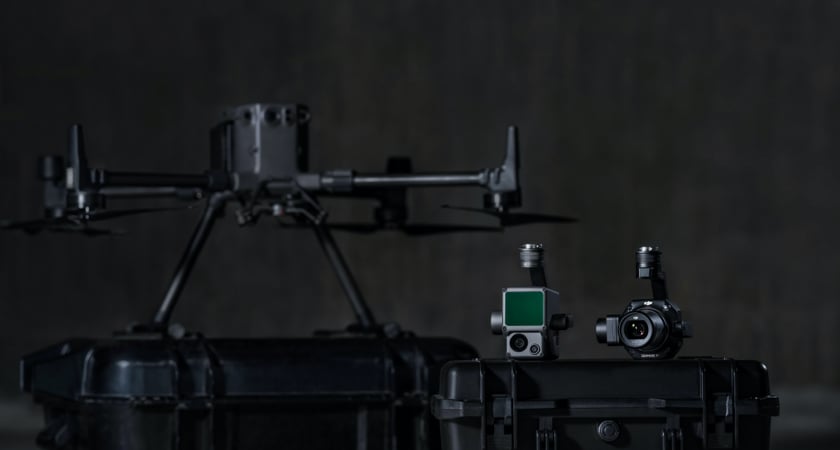 Whether you’re performing photogrammetry or LiDAR mapping on your next site, DJI also has the payload you’re looking for. The Zenmuse P1, our flagship photogrammetry payload, comes equipped with a 45-megapixel full-frame low-noise high-sensitivity sensor with interchangeable 24/35/50mm fixed-focus lenses. Combined with superior data quality management, you’re ready to map out every little detail.

For surveying jobs that require LiDAR, we recommend the Zenmuse L1. With high-accuracy IMU and dense foliage penetration at a reasonable price point, this payload is perfect for surveying any terrain. Both cameras are designed for easy integration with our mapping software, DJI Terra.

Are the M300 and Propeller’s PPK platform the last word in drone surveying?
in AEC & Surveying

Why RTK Hardware is Here to Stay
in AEC & Surveying Inspection

Drone surveying has fast become one of the most effective uses of drone technology to date. Instead of traditional manual methods of surveying, which are expensive, time-consuming, and can take...
END_OF_DOCUMENT_TOKEN_TO_BE_REPLACED

As the technology has become more durable, reliable, and accessible, the world has seen drones deployed in increasingly diverse environments, industries, and scenarios. And across these, the common...
END_OF_DOCUMENT_TOKEN_TO_BE_REPLACED