PipeChina, known formally as China Oil and Gas Pipeline Network, is the largest oil refining, gas, and petrochemical conglomerate in the world. To deliver raw crude to its refineries, the company has created a sophisticated network of pipelines as well as pipeline suspension bridges that keep the unrefined oil flowing 24/7. To ensure the integrity of the system, PipeChina employs an army of engineers whose job is to regularly inspect this intricate web of pipelines and suspension bridges.

One of those inspection engineers is Li Wei, Senior Manager of Pipeline Inspection, PipeChina Southern. In the past, he and his team would inspect each structure by climbing on the suspension bridges to visually look for faults. In addition, he’d also use sophisticated ground-based equipment to inspect the bridge’s pipes, welds, joints, clamps, rivets, girders, trusses, concrete abutments, the bridge’s stay cables, and then some. Although extremely time-consuming and labor-intensive, this process is required as the bridges are subject to corrosion, cracks, sheering, bending, fracturing, leaking, delaminations, shrinkage, as well as freeze-thaw distress.

With so many potential hazards that could affect the suspension bridges, inspecting these often remote structures is a very challenging task, to say the least. Not only is it laborious and time-consuming, but also dangerous, expensive, and equipment-intensive. More importantly, manual inspection limits an engineer’s ability to make comparisons from one year to the next. 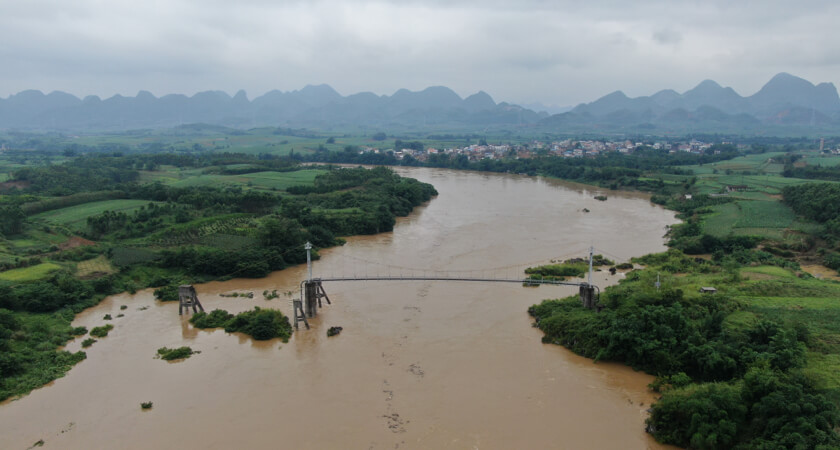 Making matters worse, accessing remote suspension bridges is not always a walk in the park. During the rainy season, roads may be washed out or the terrain may be obstructed by debris. In addition, landslides can occur, the bridges may be damaged due to rising flood waters, and territorial wildlife may be present. This not only makes the engineers’ job much more difficult but also puts the entire system at risk if the bridges and pipelines cannot be properly inspected.

Setting up a joint task force for drone bridge inspection 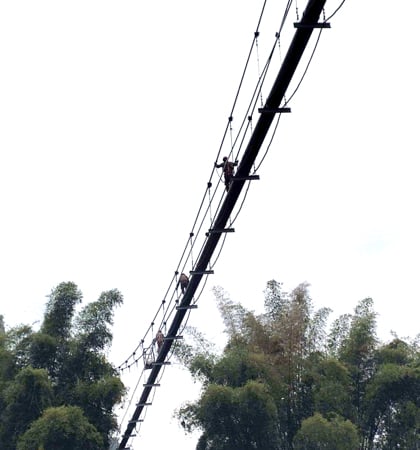 The PipeChina and DJI team employed a Matrice 300 RTK and a Phantom 4 RTK (P4 RTK) to test the effectiveness of UAVs in the field. One successful mission was flown over a suspension bridge in Luizhou, a city located in Guangxi province in the south of China.

After initially mapping the bridge from the sky with the P4 RTK and WayPoint Master, the team’s first task was to decide exactly which individual parts of the bridge needed to be inspected by the drone. As you can imagine, suspension bridges have many parts that are critical to the overall continuity of the structures. 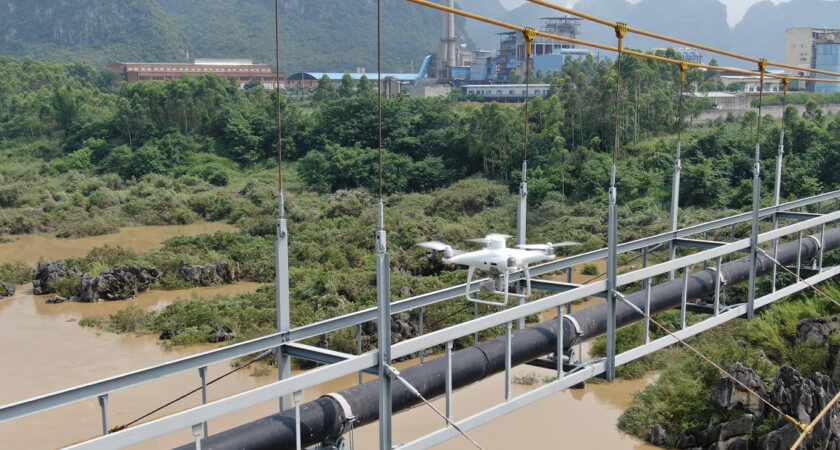 Next, the team determined the most optimal route for the UAV to take as it flew about the bridge. Using DJI Terra, PipeChina engineers uploaded the images collected by the initial P4 RTK flight and constructed a 3D model of the Luizhou pipeline suspension bridge. While viewing the model on their computers, the team then tweaked the flight path, waypoints, gimbal-pitch positions, and camera zoom settings to ensure that every important aspect of the bridge was accounted for. In addition, DJI Terra has a feature that allowed the engineers to run the simulated flight path on their computers to double-check that no detail was missed. By allowing the engineers to adjust the flight path from the comfort of their own computers, DJI Terra improved the overall efficiency of the mission. 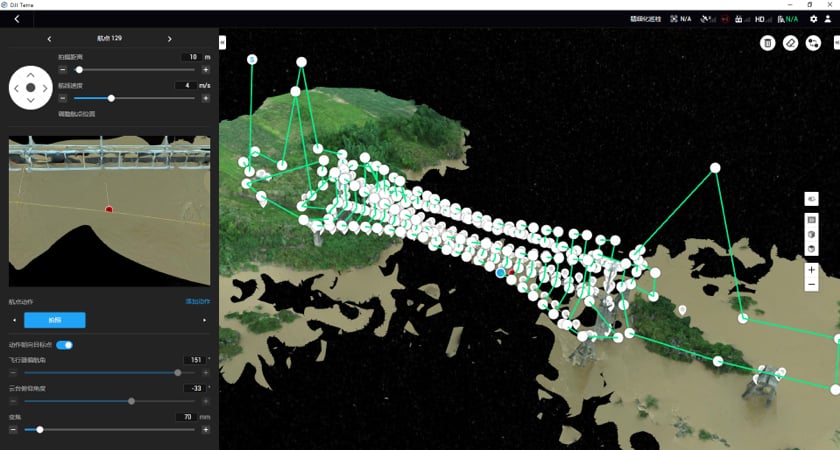 Onsite, an expert drone pilot initially flew the UAV around the bridge to test the flight path and adjust waypoints. Once waypoints were accurately set up along key areas of the bridge, engineers with very little drone training could easily fly the drone using its pre-planned flight path. And after selecting this pre-arranged path, the engineers could sit back while the drone flew itself to each waypoint and automatically took precise photos of the bridge.

Due to the complex design of the suspension bridges with cables, guy wires, girders, and other tight spots, it is important that the drone used has built-in obstacle avoidance sensors, like the M300 RTK. More importantly, with a powerful zoom camera like the Zenmuse H20, the drone rarely needs to fly near any obstacles.

After the flight data was recorded, engineers used the high-resolution images taken by the UAV to analyze and compare photos based on linear, area, and volumetric measurements. While inspecting each photo in detail to pinpoint and highlight problem areas, the engineers added annotations and labels to maps and measurements which improved reporting and communications.

To make sure no stone was left unturned, they ran more flight simulations and tweaked the flight path and waypoint settings further. Once satisfied, the team let the drone’s AI algorithm automatically compare real-time images captured during flight and calibrate the best shooting angles. As soon as everything was confirmed, the drone could then automatically fly its mission and take the best photos possible without the need of an expert drone pilot. And it could repeat that very same flight path over and over again. 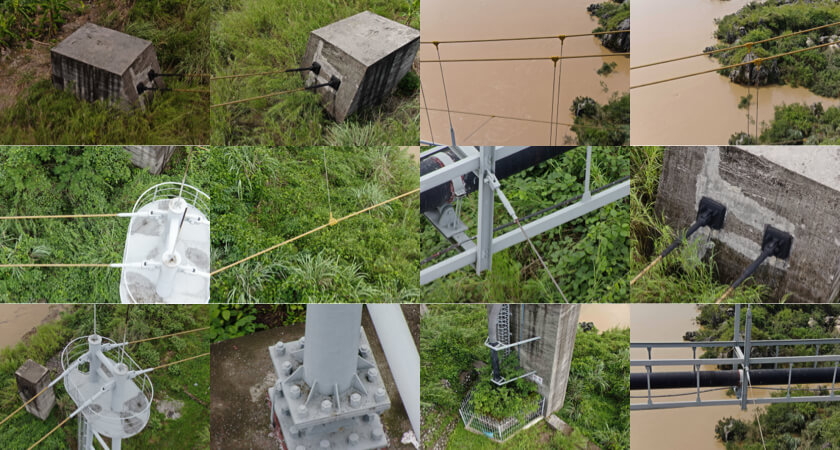 After examining the recorded data and tweaking the flight path once more, the engineers then returned to the suspension bridge, launched the M300 RTK drone, and ran the pre-programmed flight path which included 190 waypoints and numerous camera and gimbal settings. To double- and triple-check the results, the team had the drone run the pre-programmed flight path numerous times to test for reliability, accuracy, and repeatability.

Once all the high-resolution data was captured onsite, the team returned to their office to compare and analyze the data. As a result, the PipeChina inspection engineers found the images collected by the Matrice 300 RTK and Zenmuse H20 to be highly accurate and determined that using drones to inspect pipeline suspension bridges not only saves time, but is also cost-effective and much safer.

"DJI’s UAVs were successfully used to inspect several of our suspension bridges. By employing these drones, we were able to maximize the safety of our inspectors and optimize our overall inspection process. Moreover, DJI offers an extremely intelligent solution that is very advantageous for suspension bridge inspection.”

Because the drone tests were so successful, Zhang went on to say that he expects his engineers to increase their suspension bridge inspection rate from once a year to once a quarter or even once a month. This increased inspection rate could lead to more accurate measurements and help engineers more quickly find faults in their vast oil pipeline system, thereby extending the life of the network and keeping the crude flowing.

For more information on how drones can be a highly effective inspection tool, click here.

How automated inspection works with intelligent flight mode and waypoints

Once the M300 RTK is airborne, a pilot can record his or her flight path using the drone’s live mission recording feature when the UAV is in intelligent flight mode. This highly effective tool allows pilots to record intricate details of their flight as well as set up camera angles, zoom settings, and gimbal orientations at each plotted waypoint, and then store that data on the drone’s memory card. In addition, pilots can easily use the controller’s touchscreen to quickly tap on targeted items to set up waypoints, adjust waypoint settings, or highlight areas of interest.

As a result, the drone produces consistent photo framing and achieves better results. Best of all, once the flight path is set, the inspector only needs to start the pre-recorded flight plan and the drone will automatically execute the exact same recorded maneuvers time and again. This ensures that a bridge can be inspected exactly the same way each and every time, thereby allowing engineers to easily compare and contrast current images with those from previous missions. This effectively highlights potential problems and creates an historical image library of each critical component of every bridge in the system. 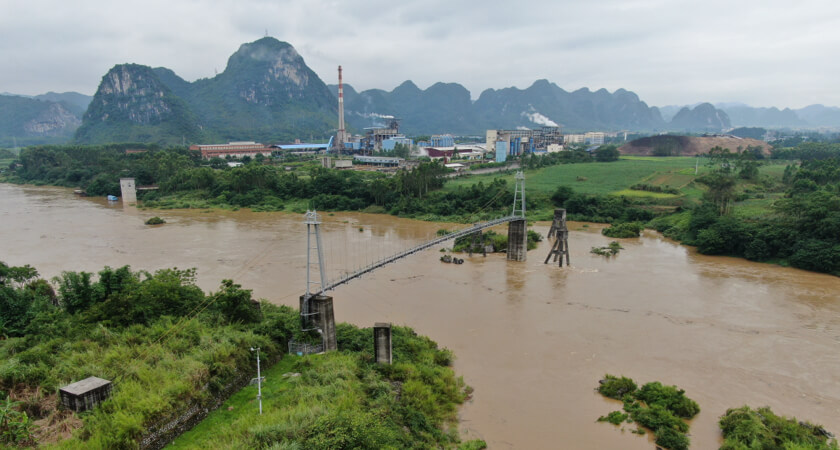 As soon as the drone bridge inspection is over, engineers can effortlessly examine the drone’s high-resolution images and look for damage or other problems associated with the suspension bridges. Thus, by using drones, the engineers can inspect bridges much more quickly and avoid the dangers that are common with inspecting bridges on foot, and also, they can fly missions at a safe distance from hard-to-get-to locations.

To learn more about how drones do automated inspection, click here.

The Matrice 300 RTK with a Zenmuse H20 series payload a number of advanced features that work to make drone bridge inspection even easier: 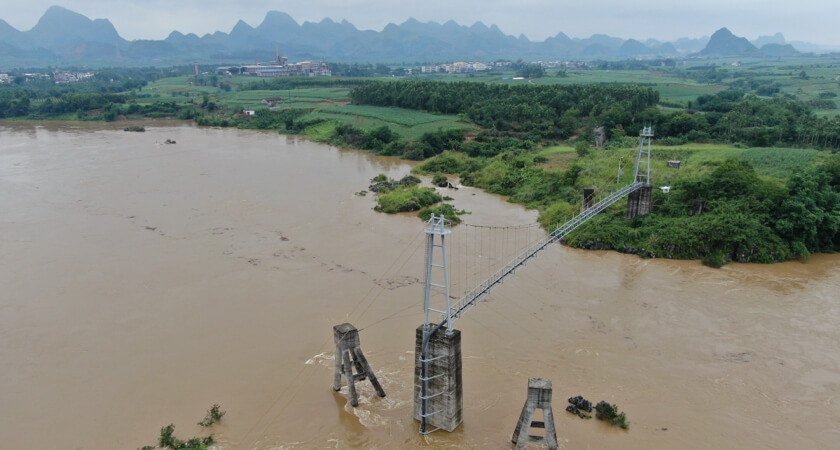 This is just one case study showing how effective DJI’s enterprise drones can be for the oil & gas industry (Click here for more oil & gas industry applications). UAVs are also expanding into other industries and exceeding users’ expectations in more ways than one, for example, in the following areas:

For more information on how DJI drones can improve your inspection capabilities, contact a certified DJI representative near you.

Coastal erosion has become an increasingly severe problem in much of the United States. An analysis by the nonprofit research group Climate Central estimates that rising sea levels could wipe out...
END_OF_DOCUMENT_TOKEN_TO_BE_REPLACED

Energy is the essential ingredient of human evolution. It powers economies and sustains life as we know it. And yet our relationship with this precious commodity is at a turning point.
END_OF_DOCUMENT_TOKEN_TO_BE_REPLACED

When Alex Nunez left his native Venezuela for Miami in 2015 to be closer to his sister – and open the next chapter of life in a new city and country – the trained engineer decided to broaden his...
END_OF_DOCUMENT_TOKEN_TO_BE_REPLACED

In many parts of the world, where ships are used to import oil and gas products, refineries and storage terminals are typically located near navigable waters. Transfer between a moored ship and an...
END_OF_DOCUMENT_TOKEN_TO_BE_REPLACED