Demolishing a cooling tower is no small feat. The sheer size and age of the structure requires a deeper inspection to assess for erosion, hazardous materials, and structural integrity. This is the challenge that faced the Sopreco team when assessing three towers scheduled for demolition in Metz, France. To ensure the safe, accurate inspection of these cooling giants, they decided to use a LiDAR-equipped drone solution.

For this four-day project, it was decided that a mixed drone approach using both LiDAR and photogrammetry techniques would suit best under the strict time constraints. In this case, DJI provided Sopreco with a Zenmuse L1 payload for the task.

The Zenmuse L1 and P1 were both responsible for collecting essential inspection data.

The traditional approach to cooling tower maintenance or demolition usually requires teams working from scaffolding, or other suspension methods. The project’s tight schedule, however, mandated a faster inspection method. More importantly, because some of the concrete was damaged and was covered with asbestos-tainted paint, traditional inspection methods were simply not feasible. 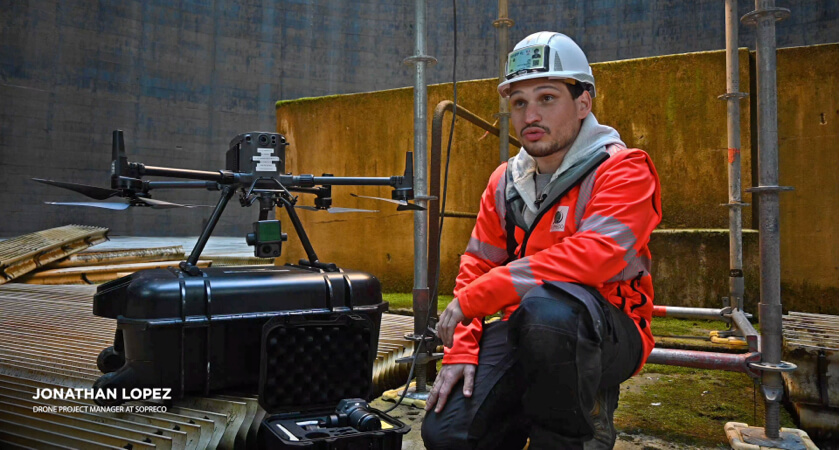 An alternative approach for the team could have been the use of a crane or helicopter to assess the damage but, as Jonathan Lopez, the Sopreco drone division’s lead specialist, makes clear:

“A drone inspection was the only solution considered. There are simply no advantages to other options when it comes to costs and security for our inspection team.” - Jonathan Lopez, Sopreco Drone Division Lead Specialist

The first step in demolition is planning. Sopreco decided to first capture and build a 3D model of the three cooling towers with the support of both the Zenmuse P1 and L1. All data would be collected with the drone(s) and processed into an accurate 3D model with DJI Terra. The accurate data set acquired could then be shared with the groups pitching for the subsequent demolition job. This 3D phasing of the process can help these companies identify risks, explain planned methods, and ensure a better quote from the vying companies.

“The flight process is pretty straightforward and relatively quick to complete - about one and a half days per tower. Data processing and model creation can take 1-3 weeks. Teams should keep that in mind when planning,” adds Lopez.

The Sopreco team traditionally uses drone photogrammetry for a job of this scope for capturing data to create orthomosaics or 3D models, as do many surveying and mapping professionals.

The affordability and flexibility of photogrammetry to provide detailed maps and models have made this option the most accessible choice for many inspectors of assets or structures such as cooling towers.

However, there are some minor setbacks to using photogrammetry when surveying. For example, in this project, there were major differences in luminosity on the inside and outside of the cooling towers. Especially on the insides, lighting is much dimmer and it can be difficult to capture high-quality visual data. Additionally, the tight schedule for this project meant that much of the work would need to be completed under low-light conditions, which can result in lower-quality photos, and ultimately a less useful model.

This is where a LiDAR option comes in and fills the gap.

LiDAR (light detection and ranging) works by emitting laser light and measuring the ping time and intensity from the object back to the sensor. It builds topographically accurate terrain models by incorporating the high-accuracy systems of satellite positioning (GNSS data) and an inertial measurement unit (IMU).

A major benefit to LiDAR is that it does not require bright, well-lit conditions, unlike photogrammetry. Moreover, the final data outputs are point-cloud coordinates and are much quicker to process into a workable model with software. In this case, the L1 was a perfect option for Sopreco’s tight schedule and the necessity to work even in the evenings and at dusk.

The result: centimeter-accurate rendered point clouds (3D representation of objects) that are quicker than ground survey or photogrammetry options.

After the initial steps of acquiring accreditation for the flight, the Sopreco team created a mission analysis in order to define a comprehensive strategy for the collection of data. Ground control points were set and measured before the scheduled flights.

The main challenge of the task lay inside the cylindrical behemoth where, due to its metallic structure, GPS can become inaccurate. For this reason, a trained drone pilot took over complete control of the drone for this phase of the project.

Before initiating the automated drone LiDAR inspection, a manual photogrammetry flight with the P1 was first conducted to capture the outside and inside faces of each structure. Next a LiDAR flight collected accurate data inside and outside of the towers.

“We did not have an easily markable target on top of any of the structures. So, we used the data collected by LiDAR to control and rescale the photogrammetry data,” remarked Lopez. “The new P1 sensor really improved the overall results and was outstanding despite the low light conditions.”

The Zenmuse L1 LiDAR solution as a game changer

Integrated drone LiDAR solutions like the M300 and L1 are more affordable and accessible than ever. This has allowed for the democratization of LiDAR across many professions, including the geospatial, surveying, and construction industries. For this reason, what was once seen as an exorbitant cost, LiDAR can now be included in a drone inspection alongside photogrammetry and thus ensure maximum precision.

“The drone makes it possible to do this topographical work in complete safety. On a site like this, it will bring new perspectives and new ways of working that were not possible before,” explains Bruno Pillon, land surveyor and drone remote pilot at Sopreco.

The accuracy and versatility of LiDAR, for example, in low light and areas of heavy vegetation means it can bring more efficiency to even the most demanding aerial surveying missions.

Jonathan Lopez from Sopreco explains it quite simply:

“Using drone technology is similar to a drill, hammer, or any tool. When put into the hands of a drone pilot and land or building surveyor, the competitive advantages are enormous.”

Coastal erosion has become an increasingly severe problem in much of the United States. An analysis by the nonprofit research group Climate Central estimates that rising sea levels could wipe out...
END_OF_DOCUMENT_TOKEN_TO_BE_REPLACED

Energy is the essential ingredient of human evolution. It powers economies and sustains life as we know it. And yet our relationship with this precious commodity is at a turning point.
END_OF_DOCUMENT_TOKEN_TO_BE_REPLACED

When Alex Nunez left his native Venezuela for Miami in 2015 to be closer to his sister – and open the next chapter of life in a new city and country – the trained engineer decided to broaden his...
END_OF_DOCUMENT_TOKEN_TO_BE_REPLACED

In many parts of the world, where ships are used to import oil and gas products, refineries and storage terminals are typically located near navigable waters. Transfer between a moored ship and an...
END_OF_DOCUMENT_TOKEN_TO_BE_REPLACED