Shining a Light on Drone Technology in the Solar Energy Revolution

As humanity steps slowly back from the brink and its reliance on fossil fuels wanes, solar energy is taking center stage in the clean energy revolution. In the past 10 years, global installed solar energy capacity has increased a staggering 1,454% - from just 40 gigawatts (GW) in 2010 to an estimated 583.5 GW in 2020. By 2024, this is predicted to rise to more than 1,400 GW worldwide.

To meet these demands, the size and capacity of solar plants are also growing exponentially. However, scaling solar brings new challenges. In order to maintain the output of solar plants and keep them running at peak efficiency, operators need to perform regular solar panel inspections, checking for damage or dirt, which could be reducing efficiency and by extension the profitability of the plant.

While traditionally this would be conducted manually, the ever-increasing size of modern solar plants means this solution is no longer financially viable. Even for smaller sites, solar energy companies must install many thousands of solar panels distributed across large areas and this presents an enormous, not to mention costly challenge.

Enter Drone Visual, the Brazilian-based tech company that has introduced new solar panel drones across three sites covering a combined area of 10 km2 and containing some 900,000 individual solar modules. For an area of this size, manual inspections proved both costly and inaccurate. However, by conducting solar panel inspections with drones, a team of two is now able to inspect every single solar module in just 13 days, rapidly identifying damaged or dirty panels and making the sites much more viable to maintain and keep running at peak capacity.

How to maintain peak solar capacity

Any number of issues can impact the efficiency and output of solar modules, including dirt, defective diodes or cells, and more substantial damage to the entire panel. Dirt specifically is one of the most common challenges for most solar plants. The Solar Energy Power Association notes that dirty solar panels can lose up to 20% of their energy output while the National Renewable Energy Laboratory puts that figure even higher, at 25%. More recent research has shown that a dirty solar panel can lose up to 50% of its efficiency compared to a clean one. Such enormous losses have a significant impact on the efficiency of an entire solar plant, eating into profits, and making large-scale modern solar farms far less viable.

However, for sites the size of modern solar farms, solar panel inspections are extremely difficult. Traditionally, an army of workers equipped with handheld inspection instruments would walk the entire solar plant on foot, checking the output of individual cells for defects. Because of the sheer size of the plants, manual inspections often mean that only a small percentage of solar panels can be routinely checked and, instead, plants often achieve inspections via sampling and extrapolation. In some cases, as low as just 2-3% of a plant is assessed and analyzed resulting in highly inaccurate reports. Moreover, even when just sampling, manual inspections are hugely time-consuming operations requiring immense manpower that comes at a significant cost, again eating into profits and limiting the effectiveness of large-scale modern plants.

During a Drone Solar Inspection, an M210 is manually flown at a height of 50m following horizontal flight paths from West to East. With an inspection field of view (FOV) large enough for the XT2 to capture two strings of modules at a time, operators systematically capture thermal and visual images of the entire site.

Once images are captured, Drone Visual then uses FLIR tools to analyze images for post-processing and report generation. The reports provide a simple overview of the temperature of each panel allowing operators to quickly identify defective units and send out teams to investigate and repair or clean those units. 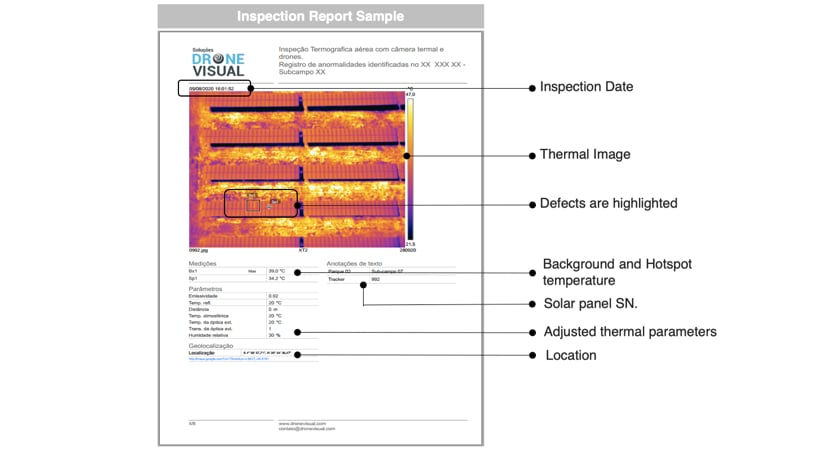 Since the purpose of a panel is to absorb solar energy, if the thermal camera is picking up heat levels that are too high, this is an indication the panel is not operating at capacity and there is a problem such as a defective cell or bypass diode, dirt or dust, or damage to the panel. This means that remotely, operators are able to not only identify that there is a problem but more importantly what the problem is, hugely increasing the efficiency and speed of any responsive actions required.

Prior to using drones, inspections at the three sites were carried out manually, by checking individual panels with handheld equipment. Given the size of the solar sites, however, manual inspections could only be conducted by sampling. What this means is that only 2-3% of modules were being analyzed during an inspection, and the extrapolated results were understandably highly inaccurate. Potentially hundreds, if not thousands, of defects would be left unaddressed.

In contrast, with a drone solar inspection, every module is analyzed, and the resulting reports become immensely more accurate and valuable. Using a solar panel drone, just two staff were able to inspect the entire combined 10 km2 area within 13 days identifying 6,000 anomalies across the three solar plants.

At the same time, the instruments used for manual inspections are often highly complex resulting in reports that were difficult to read and act on. By comparison, the reports compiled from the thermal images have made analysis much simpler enabling operators to quickly identify problems and take swift corrective actions.

There are also health and safety benefits. By operating remotely, drones reduce the need for workers to work within dangerous high-voltage environments. Furthermore, the use of drones also means that inspections also aren’t hindered by rough terrain limitations bringing far greater versatility to solar plant construction and location.

Solar plants aside, drones are already being utilized by other industries in a variety of similar drone inspection scenarios. While Drone Visual has utilized DJI’s M210 RTK V2 drone equipped with an XT2 thermal camera, other scenarios have been quick to adopt the newer M300 plus H20T set-up. The M300 RTK is DJI’s flagship commercial drone and with a range of functions and capabilities it has been described as ‘an inspector’s dream tool’. With a higher maximum payload of 2.7 kg, the M300 has one of the highest endurances of any DJI aircraft capable of delivering flight times of up to 55 minutes (without payload).

While, like the M210, the M300 can be equipped with the XT2, the real highlight of the M300 is the H20 camera series, which has been specifically engineered for this drone. As DJI’s first hybrid sensor solution, the H20T is a powerful integrated payload that enables operators to capture everything, from up close or at a distance, and in both thermal and real color. And, unlike the XT2, the H20 also comes with zoom and wide-angle capabilities making solar panel inspections significantly quicker and easier.

As clean energy demands across the world rise, the size of solar farms is increasing exponentially to compensate. Increased sizes, however, bring a host of challenges for which drone technology is uniquely placed to overcome. With drone solar inspections, Drone Visual enabled operators to inspect every single panel across their three solar sites in just 13 days – something that would have been impossible to conduct manually – identifying a significant number of issues that were otherwise reducing the profitability of the plants. By enabling operators to monitor and maintain panels much more comprehensively, and at a fraction of the cost, drone technology is becoming a fundamental tool in building bigger, better, solar plants providing more clean energy for more people.

When Alex Nunez left his native Venezuela for Miami in 2015 to be closer to his sister – and open the next chapter of life in a new city and country – the trained engineer decided to broaden his...
END_OF_DOCUMENT_TOKEN_TO_BE_REPLACED

In many parts of the world, where ships are used to import oil and gas products, refineries and storage terminals are typically located near navigable waters. Transfer between a moored ship and an...
END_OF_DOCUMENT_TOKEN_TO_BE_REPLACED

When officials were obliged to undertake repair of a 15th-century gatehouse in northeast England, they confronted a conundrum well before the first artisan took a tool to the weakened historical gem....
END_OF_DOCUMENT_TOKEN_TO_BE_REPLACED

As we brace ourselves for the effects of climate change, one of the greatest threats immediately facing us is that of wildland fires. Rising temperatures combined with rainfall shortages in regions...
END_OF_DOCUMENT_TOKEN_TO_BE_REPLACED