Water is the soul of Suqian, a prefecture-level city in China’s northern Jiangsu Province. With two rivers and two lakes flowing through it, Suqian has a rich cultural history, thriving aquaculture, and plenty of tourist attractions.

But until recently, the city of 138,500 residents also had a dirty secret. A secret called ‘Dragon Beard Ditch’. An important drainage channel in the old city center district, the Maling River, had fallen prey to industrial pollution. 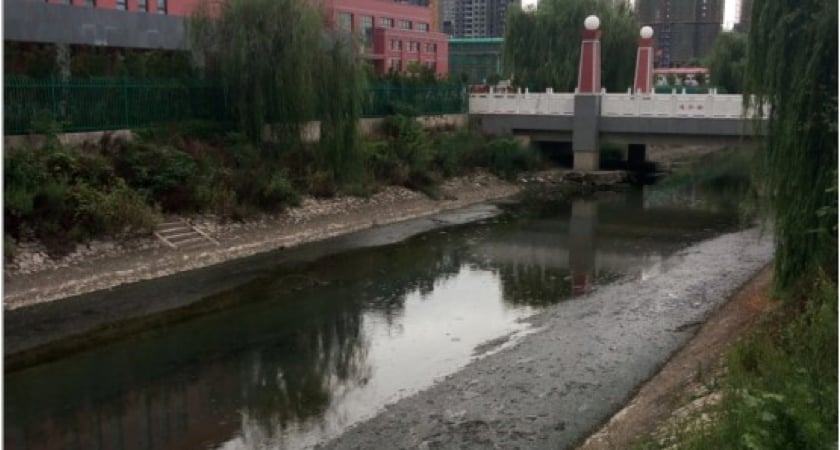 Manually excavated in 1974, the river channel runs along a length of 5.2 km with a catchment area of 11.6 sq km. But with disgusting black sewage staining Maling’s turquoise-green waters, the river’s deplorable condition had begun to affect the daily lives of residents in the surrounding areas.

And thus began an ecological restoration project to revive a water body that was not only quickly turning into an eyesore but had also become a potential health hazard.

Today, after multiple rounds of water treatment, combined sewage overflow control, and installation of sewage interceptors and sponge facilities, Maling has been reborn as a clean and beautiful river. It is now a scenic belt with a large north-south promenade where people can walk along the riverbank, enjoying the clear waters and beautiful landscaping. 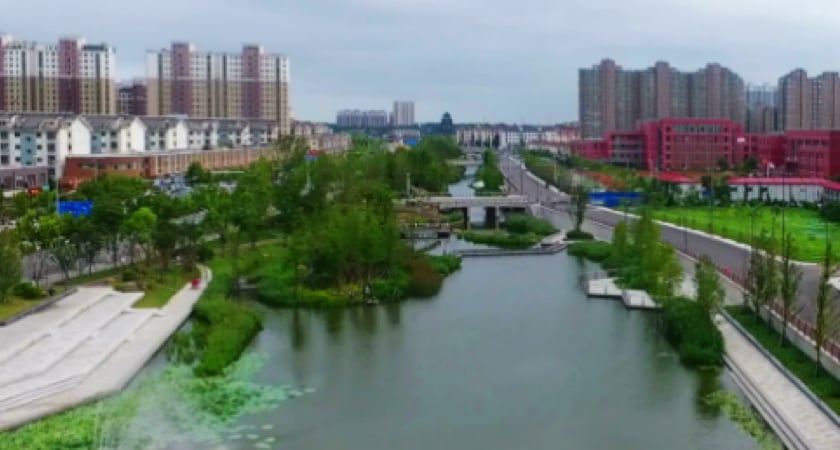 Wanting to document these improvements, the city government commissioned a 3D model of the river. The job was entrusted to KanWinds, a surveying solutions company. But it was a job that came with several challenges.

City officials wanted the corridor map to be completed within 10 days in a cost-effective manner. This deadline could never have been met using traditional means of corridor mapping that are both expensive as well as labor- and time-intensive. Therefore, it was decided that drones would be used.

Now came the question of figuring out which kind of drone: fixed-wing or multirotor. While a fixed-wing drone could have stayed airborne for a longer time, covering large areas quickly, it was not feasible to fly the craft at low altitudes in an urban setting. Using a multirotor drone was more viable, but there were challenges there too:

Best way to map a river pulsing through a city?

The team compared several solutions and zeroed down on DJI Phantom 4 RTK, a trusted workhorse of the surveying industry. Being small and portable, this intuitive mapping solution can capture centimeter-level accurate data in complex urban environments with uncanny ease.

Further, the team decided to use DJI Terra, an all-in-one drone mapping solution that simplifies both corridor mission planning and the generation of high-precision 3D models.

In the initial stage, the P4 RTK flew along the 5.2 km river to take stock of the heights of the buildings on the two sides of the river. This data was then imported directly into the flight planning app as a KML file to facilitate intelligent flight planning.

It’s worth emphasizing here that the DJI P4 RTK can be configured to fly at different elevations. So, during the 3D river modeling mission, variable altitude flight paths were used to accommodate asymmetrical building heights.

In areas with shorter buildings, the ground sampling distance (GSD) was set to 2 cm and the drone flew at a height of 73 m. Meanwhile, in the areas where the buildings were tall, the drone soared to 108 m with the GSD set at 3 cm.

In both scenarios, the degree of overlap was kept consistent. The side overlap was fixed at 70% and the degree of front and back overlap was set at 80% to ensure that the built model provides a sharp and realistic representation of the river corridor.

The data collection happened over a period of three days. Two field pilots operated P4 RTK drones simultaneously during daylight hours, which gave them seven hours of flying time each day. A total of 72 flights were conducted, capturing 22,744 images.

Once this data reached the back office, the team used DJI Terra to obtain a point cloud through aerotriangulation of the images. Then, they reconstructed the point cloud to generate a 3D model with a data size of 18.3 GB – all with a few clicks.

Overall, to create a ready-to-view and share river corridor map, the post-processing of the drone data took four days. And the team used only a single computer with an Intel Core i7 CPU, 64 GB memory, and an Nvidia GeForce RTX 2080 video card for this task.

Despite a tight schedule and limited budget, it took the surveying team only seven days to complete the river modeling project – three days ahead of the deadline. This unparalleled efficiency could be achieved because of the following factors:

Out of the box surveying solution

The project used Phantom 4 RTK drones for surveying and data collection. With the drone having Real-Time Kinematic (RTK) technology built-in, the P4 RTK was able to provide real-time, centimeter-level positioning data for improved accuracy and precision in the generated 3D model. Essentially, the RTK capability of the drone negated the need for establishing ground control points, thus reducing the workload of the field operations team. 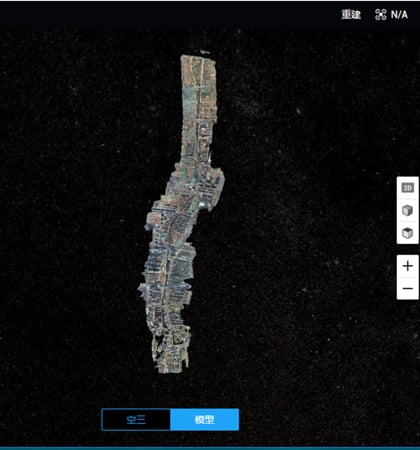 A 3D model of the Maling river created with DJI Terra

Integrating seamlessly with surveying drones like the P4RTK, DJI Terra offers ultra-high drone data processing capabilities. Its latest version uses only 1 GB of memory to process 400 photos from P4RTK drones, making this update 4x more efficient than earlier versions. In this project, DJI Terra was installed only on one laptop and was able to process more than 20,000 photos in just four days, delivering the triple benefit of efficiency, economy, and time-savings. 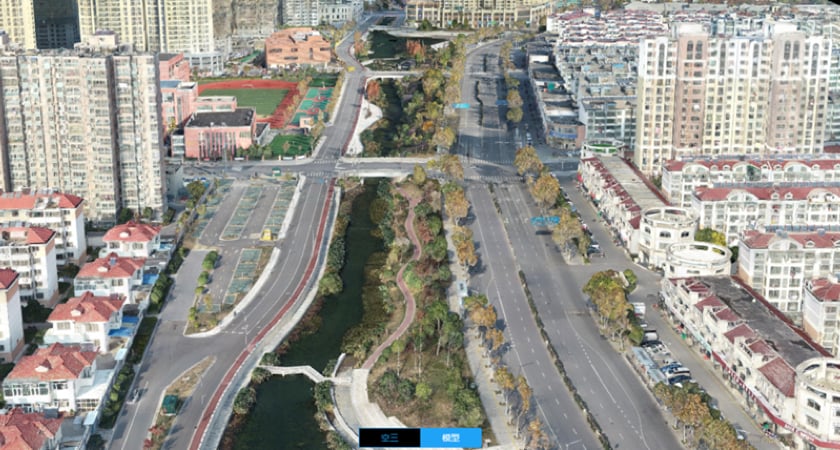 The Maling River Ecological Restoration Project is noteworthy for the increased quality of life it offers to residents – more greenery, protection of biodiversity, recreational areas, and in general, a healthier environment for all. Several public works projects were also undertaken as part of the river revival, including the development of a water park and the Dongguankou Historical and Cultural Park. All in all, this project increased the green area along the river by a total of 145,000 square meters, achieving unity of functionality and beauty.

Using a combination of Phantom 4 RTK drone and DJI Terra software, the city government now has a high-precision 3D model of the river that neatly displays the shops along the unobstructed streets, trees planted along the riverbanks, new bridges, parks, and other public facilities.

This model will now assist in the routine maintenance and management of the promenade, and in the future, facilitate knowledge-sharing with other cities.

DJI, meanwhile, will continue to leverage technology to make cities around the world more clean, green, and sustainable. For more information on DJI solutions for urban planning, download our Building an AEC & Surveying Drone Program Playbook.

Coastal erosion has become an increasingly severe problem in much of the United States. An analysis by the nonprofit research group Climate Central estimates that rising sea levels could wipe out...
END_OF_DOCUMENT_TOKEN_TO_BE_REPLACED

Energy is the essential ingredient of human evolution. It powers economies and sustains life as we know it. And yet our relationship with this precious commodity is at a turning point.
END_OF_DOCUMENT_TOKEN_TO_BE_REPLACED

When Alex Nunez left his native Venezuela for Miami in 2015 to be closer to his sister – and open the next chapter of life in a new city and country – the trained engineer decided to broaden his...
END_OF_DOCUMENT_TOKEN_TO_BE_REPLACED

In many parts of the world, where ships are used to import oil and gas products, refineries and storage terminals are typically located near navigable waters. Transfer between a moored ship and an...
END_OF_DOCUMENT_TOKEN_TO_BE_REPLACED