How drones are raising precision agriculture to new heights

When it comes to feeding the world’s ever-growing population, farmers deserve all the help they can get. To get the best out of every inch of farmland, modern farmers are turning to new technologies like drones.

Precision agriculture represents a good test case for drones in farming. This is a methodology based on more exact and efficient work on individual sections of larger fields. Using precise data, farmers can develop a more granular way to seed and water their crops, as well as to apply fertilizer, pesticide and other sensitive chemical agents.

As technology becomes more capable of supporting ambitious strategies and legal regulations around the commercial use of drones shift to allow new applications for these unmanned aircraft, forward-thinking farmers can build impressive levels of value relative to cost.

What is precision agriculture?

Precision agriculture, as a methodology, involves treating different parts of the same field in unique ways. This allows farmers to divide their land along more granular lines than ever before and use every square foot in a strategic, intelligent fashion.

The U.S. Department of Agriculture notes how precision agriculture deviates from more traditional mechanized agriculture. Legacy methods of fertilizer and pesticide application were not precise enough to deal with the conditions within portions of a field — treatments were applied based on the average characteristics of the whole area, which could be imprecise and wasteful.

Now, with the ability to capture more precise measurements on individual areas — including from drone-mounted sensors — has allowed a new era of smart farming to take hold. When farmers can perform precision spraying based on accurate data, their crop yields and production can go up while waste declines.

The USDA compares precision agriculture to a more classic form of crop cultivation and farm management, before mechanized farming. In those days, farmers could carefully divide fields and treat each segment in a suitable way. Precision agriculture has combined this level of specialization with modern automation and the resulting improvements in efficiency.

How do drones enable precision agriculture?

There are ample use cases for drones in precision agriculture, especially when considering that unmanned aircraft can fulfill multiple roles. From more frequent and accurate aerial mapping to careful spraying of chemicals, an agricultural drone has several ways to become an efficiency-building precision farming tool.

Drones are useful precision agriculture tools for mapping and imaging, even when compared to other potential technologies for the job, such as satellite imagery. Why are drones better than satellites as data-gathering systems? It comes down to a simple fact: Drones are close to the crops while satellites, by their nature, are high above. 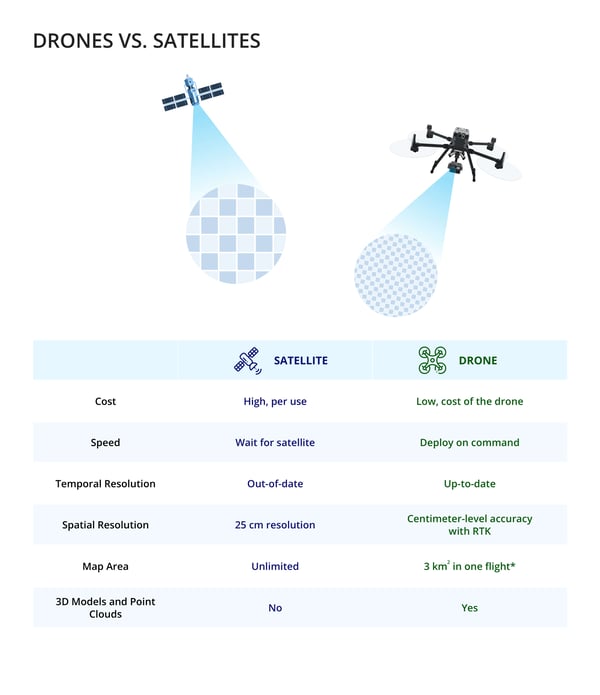 A satellite image, no matter how advanced the camera in question may be, still comes from orbit. A drone flying over a field delivers far greater proximity, and therefore image resolution. Furthermore, when a farmer uses a satellite image, the picture may be days old. A drone can provide more up-to-date information, allowing even greater precision regarding what fertilizers and pesticides are needed. 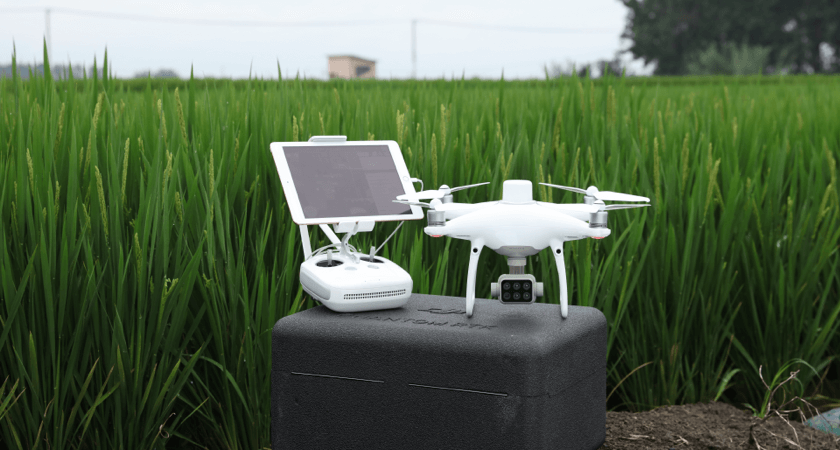 When equipped with advanced sensors, drones can provide multispectral imaging, giving users greater detail about how a particular crop is faring. These cameras capture more information than a standard camera, including on the near-infrared band. Using light invisible to the unaided eye, these cameras can help farmers create more accurate drought maps and truly give crops the attention they need.

Multispectral maps aren't the only kind of aerial imagery that's better when taken by a drone. Standard maps taken in red-green-blue (RGB) formats can show farmers how crop growth is progressing. For precision agriculture purposes, it pays to have drones take these photos rather than satellites. The much greater per-pixel resolution gives a more accurate, nuanced picture of crops' status, allowing more highly customized precision farming strategies.

Precision spraying and seeding from the air via agricultural drones

Drones can serve as the proverbial "eye in the sky" for farmers, but they can also take a more direct part in precision agriculture. A drone's ability to follow a careful flight plan over a field allows it to perform seeding or spraying duties, as well. Some versatile spreading systems can fulfill multiple roles, allowing farmers to seed their fields, reseed prairie grasses or spread chemicals on precisely chosen areas.

Today's drones are remarkably versatile and efficient from a power perspective. For example, a battery-powered spraying drone can receive a full charge in minutes rather than hours, allowing farmers to get more productive time from these assets in the course of a day. Running spraying and seeding drones around the clock can effectively add more useful hours, and the manual effort needed to operate these aircraft is remarkably low.

The use of drones in precision application of chemicals such as pesticides is an important development for the future of agriculture. Using smaller amounts of these agents, in places where they are most needed, can support compliance with regulations calling for pesticide reduction.

In areas where regulations allow drones to operate beyond the visual line of sight (BVLOS), spraying drones can prove especially effective. Deploying a fleet of drones to cover large areas with seeds or chemical agents could be a powerful near-future use case in farming, as aviation authorities consider the future of unmanned aerial vehicle operation. 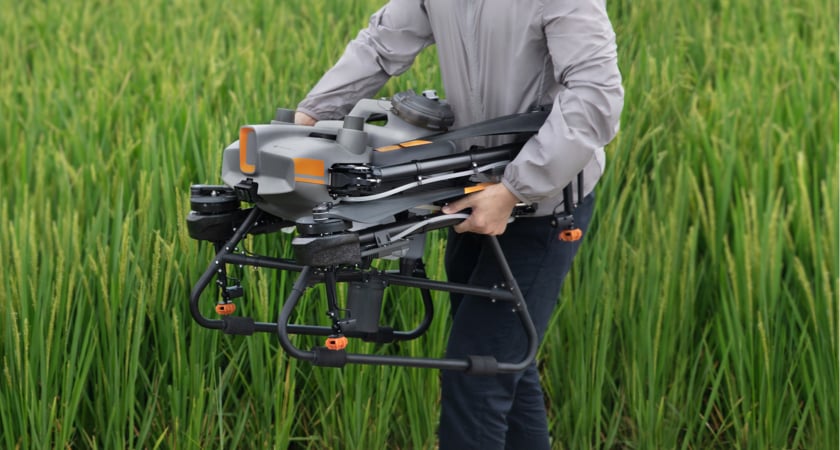 The Agras T10 folded for transport

What drone systems should tech-savvy farmers look for?

When it's time to deploy drones as part of a farming operation, whether a single vehicle or a whole fleet, it's important for farmers to select high-quality precision agriculture equipment that fits their needs. In the past, drones may have failed to meet users' expectations, as early models were low on automation and lacked the sensor capabilities to truly give farmers the data needed for precision agriculture.

Recent years have changed the precision agriculture technology status quo for the better, with equipment manufacturers' new drone models and payloads being designed with specific farming use cases in mind. The following are just a few of the hardware configurations that can bring futuristic precision farming methods into the present.

Multispectral imaging drones: Using a drone such as the P4 Multispectral allows farmers to get a precise aerial view, one that goes beyond the visible spectrum. This drone simultaneously captures standard RGB imagery and a Normalized Difference Vegetation Index (NDVI) to give actionable information about given areas of a field. Its camera supports centimeter-level accuracy, and the drone can be programmed and positioned even in areas without strong internet connections using mobile geographic positioning stations. 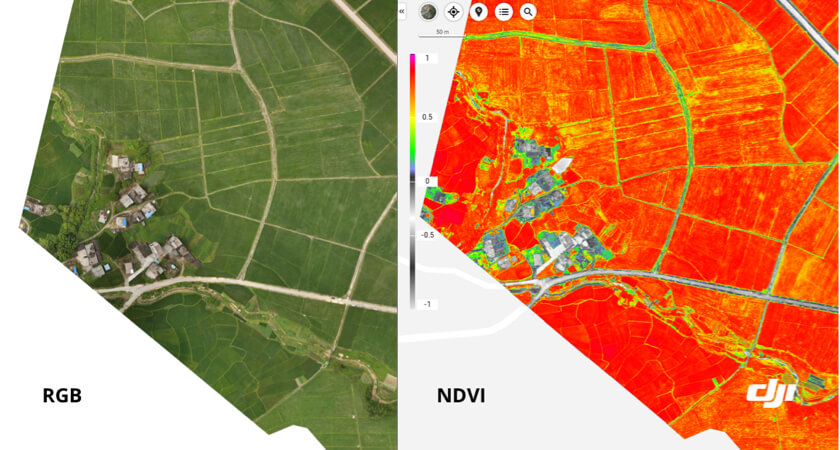 Spraying drones: An effective spraying drone follows through on the information gathered by an imaging drone, using its aerial perspective to apply chemical agents to fields precisely and with a high degree of automation. Drones developed specifically for farming such as the Agras T30 are capable of autonomous flight in many different agricultural environments, navigating via omnidirectional radar. In addition to effective software and reliable flight systems, these drones carry optimized spraying and spreading systems for precise application of chemicals or even distribution of seeds.

GPS software suites: While it's natural to think about hardware and payloads when designing a drone-based precision agriculture strategy, there is a less glamorous but just as essential side of these operations: the software tools that organize data and help farmers put it to practical use. For example, a geographic information system (GIS) such as DJI Terra mapping software can assemble accurate 2D and 3D models of fields. When overlaid with a NDVI vegetation index, farmers can create prescription maps for automated sprayer drone operation.

Task management software platforms: Using reliable task management and device management systems is essential for drone operators engaging in precision agriculture. When using a software platform designed for agriculture, farmers can get more value from their drone operations right away, using workflows designed with their needs in mind instead of having to customize functionality. Device management is not just a cornerstone of precision agriculture today, it's also set to be a pillar of more heavily automated operations to come when more drone operators are granted the ability to work BVLOS. 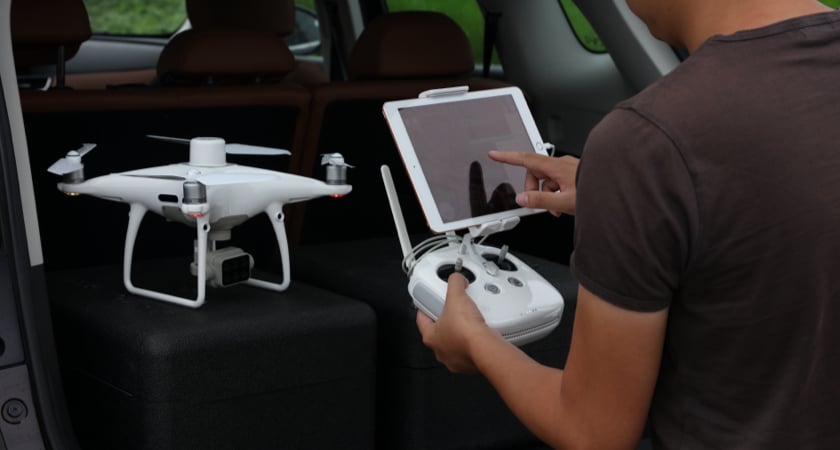 What is the future of drones as precision agriculture technology?

As with many uses of drones, such as long-distance delivery, one of the primary barriers to increased agricultural operations is regulatory, not technical. Drones have the hardware and software capability to operate BVLOS, so a loosening of aviation rules could allow farmers to cover more areas automatically.

The story is similar for other tactics such as swarming, which is the operation of multiple vehicles by a single operator. Waivers are usually granted for operators to use this feature in a single area. According to Commercial Drone Professional, however, the tide may be turning. One operator has been granted the ability to use three-drone spraying formations anywhere in the continental United States. The company views this as a chance to solve a labor crunch, helping each operator cover more area per hour than they previously could.

As drones become more commonplace in farm settings, they can take on many tasks to help farmers optimize the way they manage their crops and more. Before planting even begins, farmers can generate 3D contour maps through GIS, allowing them to place crops more strategically.  A pass with an imaging drone could help a farmer create crop yield estimates for insurance purposes, while also assessing the irrigation and soil moisture status of each part of the field.

Farmers with grazing livestock can even track the position of their herds using drone-based cameras. By finding more uses for drones around the property, these owners can make back their precision agriculture technology adoption investment quickly. Whether a farm is highly focused on one crop or diverse in its operations, a drone is a potentially useful piece of technology.

The past few years have seen a quick evolution in practical drone features that have the potential to revolutionize precision agriculture. Continuing regulatory progress and more widespread adoption of new technology including drones will bring efficiency and value to an ever-increasing number of farms — the transformation has already begun.

With the rise of large commercial buildings across the US, the demand for safe and effective inspection of rooftops has been growing substantially.
END_OF_DOCUMENT_TOKEN_TO_BE_REPLACED

We are now inching toward a place in time where most people begin to wonder: why did I make that New Year’s resolution? Well, we may not be able to help you out much in your pursuit of a “newer,...
END_OF_DOCUMENT_TOKEN_TO_BE_REPLACED

For most households, energy bills are a consistent and expensive outgoing. These costs peak during the winter months when the cold arrives. The U.S. Energy Information Administration predicted that...
END_OF_DOCUMENT_TOKEN_TO_BE_REPLACED

Delivery drones could very well be The Next Big Thing for businesses to deliver goods to their customers. They can also be extremely helpful in transporting sensitive items such as medical supplies...
END_OF_DOCUMENT_TOKEN_TO_BE_REPLACED