Flying a drone in 2021 is far easier than it used to be, but it still takes plenty of know-how to gather aerial data and make sense of it. For businesses, non-profits, and academic institutions, capturing insights from above means allocating funds, training team members, and - in almost every jurisdiction - operating within a regulatory framework.

Those hurdles are significant. Now imagine the data you need is time-sensitive, in multiple locations, or overseas. Suddenly the cost and complexity of gathering aerial data threaten to outweigh the benefits. This is where Swedish startup GLOBHE and the concept of ‘Crowddroning’ enter the picture. GLOBHE connects customers who need drone data to a global network of pilots and entrepreneurs ready to capture it.

GLOBHE’s marketplace, Crowddroning, puts drone pilots in over 90 countries within reach. It’s a simple solution that reduces the typical challenges to just a few clicks.

Drone data is available across a number of industry verticals. The most common jobs on the platform are in post-disaster response, water pollution monitoring, infrastructure inspections, and the collection of prevention data. The nature of these mapping and inspection missions means that local pilots can complete lucrative missions while serving their communities.

One project that has benefitted from access to drone data on demand is Maladrone, an ongoing study by researchers from the Vector Biology Department at the Liverpool School of Tropical Medicine and the Malawi-Liverpool-Wellcome Trust Clinical Research Programme.

The team is exploring the impact drones can have on efforts to control mosquito populations in rural Malawi and counter the spread of malaria. Historically, identifying potential larval habitats is a painstaking but necessary part of the process. Between 2018 and 2020, the researchers put drones to work in Malawi’s Kasungu district to measure their potential. By adding aerial data to the equation, they were able to more easily locate larval habitats and develop a better understanding of how malaria transmission shifts through the seasons. 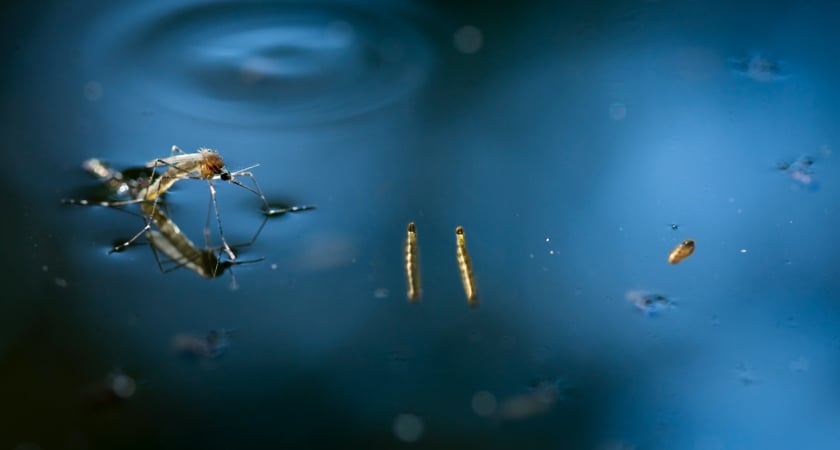 Their positive findings prove that drones can play an important role in malaria vector control. But it also became clear the team was weighed down by technical challenges within data capture and analysis. That’s why since April 2021, GLOBHE’s Crowddroning pilots have been tasked with gathering the data. Now the Maladrone team can tap into local drone expertise, focus more on the intricacies of fieldwork, and better manage its resources.

Alexander DC Mtambo started as a 1st cohort student at the African Drone and Data Academy (ADDA), an initiative by UNICEF, Virginia Tech, and the Malawi University of Science and Technology. He applied for the pilot training program after completing a degree in electronics and computer engineering. After gaining certification and wracking up plenty of hours behind the controls, Alexander is now an instructor at ADDA, preparing the next generation of pioneers in Malawi’s growing drone ecosystem. He is a Crowddroning pilot for GLOBHE and has contributed to the Maladrone project.

For Alexander, drones offer a career path that combines a passion for entrepreneurship and technology with his social conscience. A case in point is his work collecting aerial imagery for the Maladrone team.

“On this project, it felt like I was actually contributing to society directly using drones,” he says. “When I went to Kasungu to fly mapping missions, we were looking for somewhere to charge our batteries and I went to one of the houses. Inside were four people who were down with Malaria. It was one of those moments. For some people, a drone is just a toy. But here I knew the outcome of my flying would help change and save lives.

“That meant a lot. To actually know you're making an impact, seeing the support you get from the locals, and contributing to real-life problems... it’s a game-changer for me.”

Alexander believes the impact of using drones goes beyond the importance of the data gathered. He argues that exposure to the latest technology can be a powerful source of inspiration.

Flying for GLOBHE has given Alexander the flexibility to take on missions when he can and grow his own drone company - all while teaching the next generation of pilots. He’s seen firsthand how entrepreneurship can be sparked by exposure to innovation and has ambitions to set up his own drone pilot school in the future.

Tapping into Crowddroning by GLOBHE: a researcher’s perspective

Dr. Michelle Stanton is a lecturer in Spatial Epidemiology at the Liverpool School of Tropical Medicine. She leads the Maladrone team and is an author of its May 2021 publication, which details the efficacy of using drones to support malaria control efforts. Dr. Stanton was also invited to teach on the first course run by ADDA.

GLOBHE onboarded some of the first ADDA graduates in Malawi as part of efforts to build local capacity for mapping missions. This network of local pilots and GLOBHE’s data analysis capabilities have taken a lead role in gathering and analyzing Maladrone data.

“There’s already so much to coordinate when conducting fieldwork, so having this task taken out of our hands and into the reliable ones of the GLOBHE team eased a lot of pressure”, says Dr. Stanton. We also had the benefit of not having to process the imagery ourselves, which can be problematic with our slightly limited computing resources.”

By working with GLOBHE and the ADDA, the Maladrone project has managed to gather vital data in the fight against malaria in a way that empowers local communities. For Dr. Stanton, a major draw of GLOBHE was that it supported the building of local capacity in drone mapping instead of relying on international expertise. GLOBHE pilots were integrated into the project, not just used as an external data source.

“It was made especially rewarding given that I had met and taught the pilots at ADDA, and then found myself in a position to support their own career growth,” she says. “It was also reassuring to know that they were fully trained and qualified to complete the work through the courses they had taken at ADDA. While it would’ve been possible to leave all of the interaction with the pilots to GLOBHE, I felt it was important for the pilots to feel part of the team in some way. We made sure to connect them with the research team to understand how everything fitted together.”

Crowddroning is a powerful concept invented by GLOBHE. It harnesses the ingenuity of drones to provide opportunities for aspiring pilots. At the same time, insights are gathered that will benefit the operations of organizations and the communities they are a part of.

For academic researchers, energy companies, farmers, and humanitarian agencies, GLOBHE’s platform simplifies access to data. They can now work smarter, faster, and in ways that are more cost-effective.

The Maladrone project in Malawi highlights how the GLOBHE business model also supports innovation at a local level. The drone pilot profession is open to all and the number of potential beneficiaries is limitless. If you’d like to sign up to be part of Crowddroning by GLOBHE, you can do so here.

With the rise of large commercial buildings across the US, the demand for safe and effective inspection of rooftops has been growing substantially.
END_OF_DOCUMENT_TOKEN_TO_BE_REPLACED

We are now inching toward a place in time where most people begin to wonder: why did I make that New Year’s resolution? Well, we may not be able to help you out much in your pursuit of a “newer,...
END_OF_DOCUMENT_TOKEN_TO_BE_REPLACED

For most households, energy bills are a consistent and expensive outgoing. These costs peak during the winter months when the cold arrives. The U.S. Energy Information Administration predicted that...
END_OF_DOCUMENT_TOKEN_TO_BE_REPLACED

Delivery drones could very well be The Next Big Thing for businesses to deliver goods to their customers. They can also be extremely helpful in transporting sensitive items such as medical supplies...
END_OF_DOCUMENT_TOKEN_TO_BE_REPLACED