The list of use cases for uncrewed aerial vehicles (UAVs) is always expanding. Much of this growth is due to the development and refinement of valuable new capabilities and drone loadouts. For instance, the prevalence of thermal imaging is on the rise.

Drones that leverage thermal camera equipment to detect heat in addition to conventional video cameras are seeing use in a variety of scenarios. From fire detection to search and rescue missions and utility grid inspections, thermal drone deployment could be the answer to an ever-growing list of important jobs across industries.

Despite the relative newness of the technology, there are already numerous examples of DJI thermal drones in action, each of which can inspire more users to take up the technology:

These are just a few of the applications of thermal drone technology, and they demonstrate just how important it can be to have the right drone payload for the job. UAVs equipped with thermal imaging systems are already making a difference, and the equipment is still evolving.

Thermal imaging: How does it work?

When considering the present and future of thermal imaging drone technology, it's worth delving into the technical principles that make thermal cameras function. Understanding how thermal imaging equipment works can inspire more effective use of the technology and new deployment approaches for thermal drones.

Heat, also known as infrared radiation (IR), is just the vibration of atoms. Objects give off a heat signature based on how much their atoms are moving — the more motion, the hotter the object. Thermography is the process of studying these heat signatures and putting that thermal imagery knowledge to practical use.

Humans feel heat, but we can't see IR. Why is that? Because this radiation occurs on an electromagnetic wavelength that the eye can't detect. Thermal cameras are designed to turn infrared signatures into something visible to humans.

Thermal cameras use specialized lenses that pick up IR frequencies, along with thermal sensors and image processors to render the results on a visual display. When an infrared camera is mounted on a drone, the device is typically placed on a gimbal, which stabilizes the image and lets the lens rotate a full 360 degrees.

Thermal image of a utility pole captured with the H20T

The thermal sensors within these advanced cameras, technically known as microbolometers, have received notable updates in recent years. Today's options do not require the exotic cooling materials used in the past, making them much more affordable. 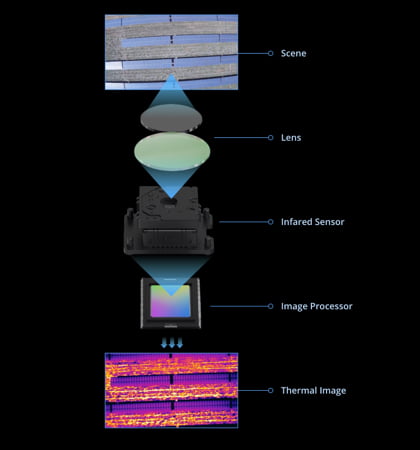 Diagram of how a thermal camera works

Diagram of a thermal sensor (microbolometer)

Drone thermal cameras can detect the surface temperature of many objects, but there are exceptions. For example, highly polished, shiny and reflective objects do not absorb much heat — they have what is known as low emissivity. These are hard to detect on thermal cameras. High emissivity objects like wood, concrete — and even people — are easy to scan.

Once drones capture thermal information using their IR cameras, that thermal data is displayed on a screen as a conventional image for operators to review. 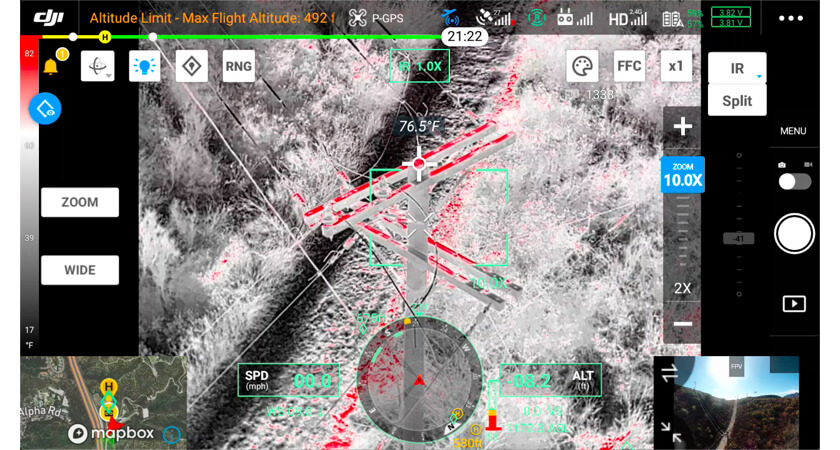 Using thermal imaging software users can change the palette of colors used to represent the heat of the scene. Each view is useful for picking various details out of the image, and these options include: 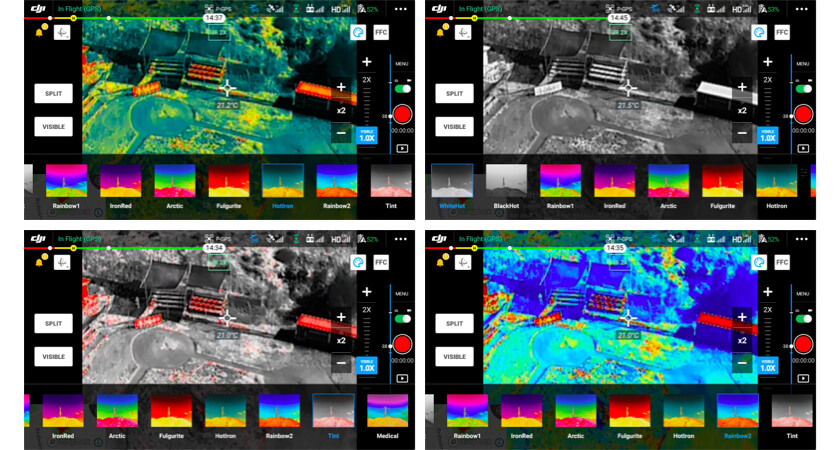 The type of thermal camera used also determines what format imagery is captured and stored in. While lower-end options capture pictures as simple image files, advanced solutions also contain thermographic data and temperature readings, along with GPS tags. Thermographic data can be inspected further with the DJI Thermal Analysis Tool.

Before you start using your thermal drone, it's important to know some common ways that thermal sensors are damaged and how to prevent this. While DJI products are known to have excellent build quality and durability, thermal sensors by their very nature are extremely precise, finely-tuned instruments that demand care and caution when in use. Improper use can lead to permanent damage to the thermal sensors, leaving artifacts across the data you collect.

Here are some examples of thermal images captured by M30Ts that has had their thermal sensors damaged by direct exposure to sunlight: 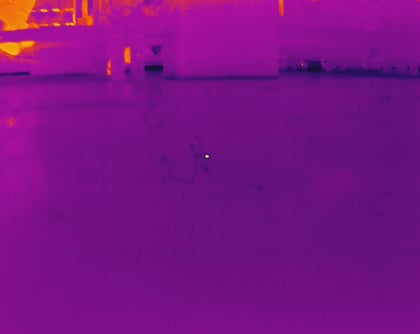 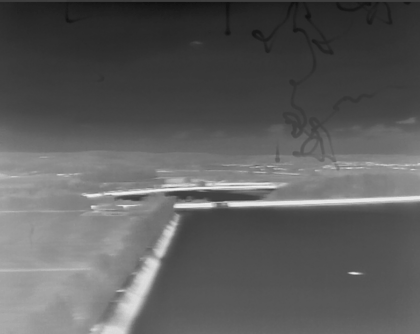 To prevent this from happening to your thermal drone’s sensor, DO NOT expose the thermal camera lenses to strong sources of energy such as the sun, lava, or a laser beam. Otherwise, the camera sensor may be burned leading to permanent damage.

Even highly effective thermal cameras have to cope with a variety of environmental factors that can make it challenging to take an accurate reading of surface temperature. These include atmospheric conditions — too much warmth, humidity, clouds, rain or snowfall can impede thermal camera accuracy. Thermal cameras also struggle with glass, as the reflective glass may be capturing heat from the sun, the ground or another object. 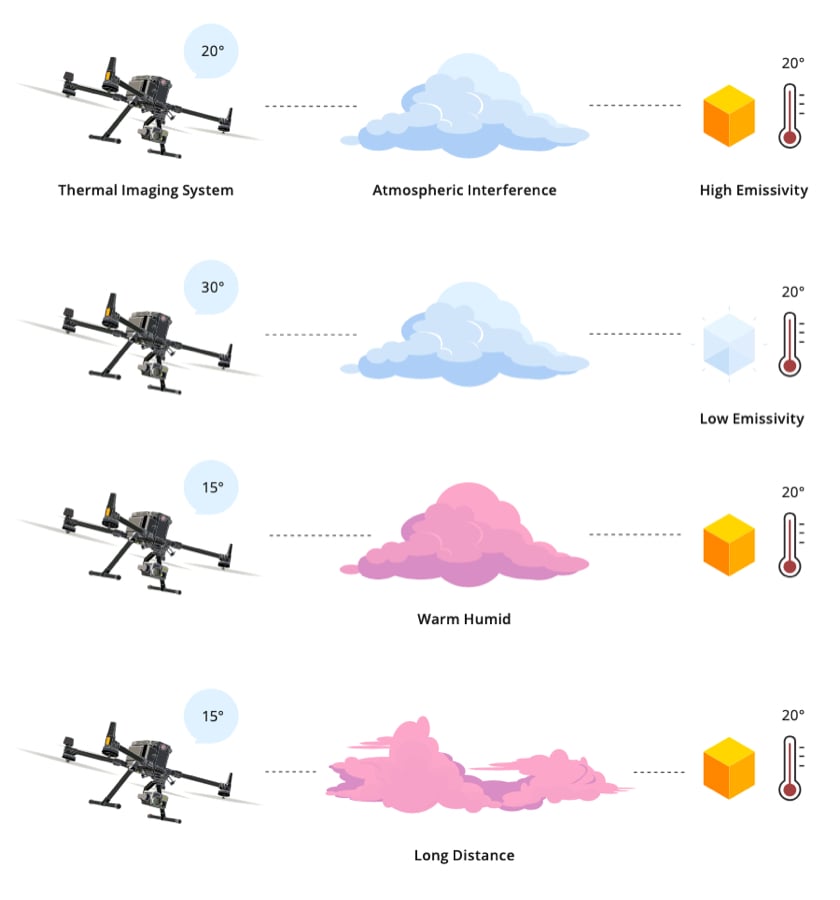 By bearing these traits in mind, it's possible to build an accurate picture of an object or landscape's thermal properties.

High resolution and more color display options are a few of the advantages that come with high-tech thermal imaging camera systems. In today's fast-moving tech development landscape, the most forward-thinking capabilities will go beyond these incremental upgrades.

Powerful new capabilities to consider include:

Backed with ever-evolving thermal drone technology, companies can expand the ways in which they use these UAVs. Mission specifications that may have been impossible just a few years ago are worth revisiting as thermal imaging becomes more precise, versatile, and affordable.

Choosing a thermal imaging payload for a drone is a matter of matching the equipment's capabilities with an organization's use case. There are a few different factors that determine how a camera system will perform in the field, as well as how much you can expect to pay. These include:

Depending on the type of work you're seeking a drone for and the conditions in which you plan to use the thermal UAV, you can select a thermal camera payload to meet your needs. Some of the highly capable payloads currently on the market include models from the Zenmuse H20 series, such as: 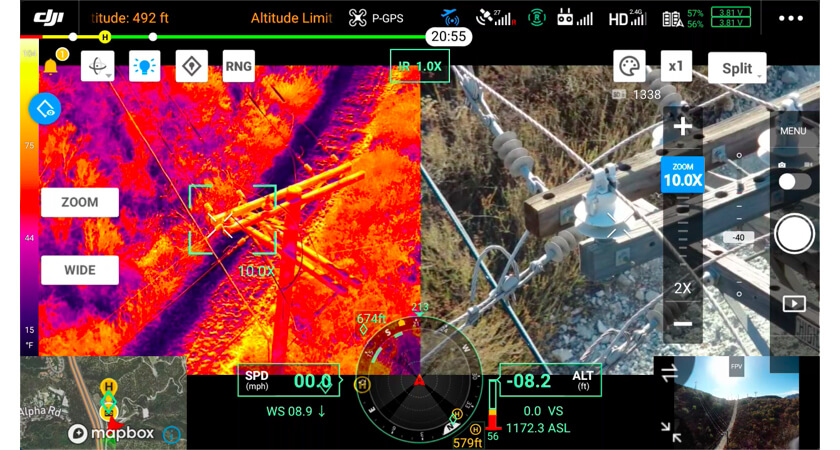 Split mode with the Zenmuse H20T

Using advanced camera payloads allows drones to intervene in a wide variety of situations, whether that means searching for missing persons at night, scanning for potential fires, conducting electrical inspections or any other potential application.

Use cases for thermal drones: Now and in the future

Thermal drones can serve in more roles today than they could in the past, with more precise sensors and lower price points opening up new possibilities. This process of expansion and discovery is ongoing, with new use cases opening all the time.

If your organization engages in any of the following activities, a thermal drone may be the perfect piece of technology for your needs:

The expansion of thermal drone use beyond public safety roles, and into its efficiency-building part in utilities and agriculture, is a relatively recent development. This shows that as users, both professionals and consumer enthusiasts, are constantly thinking of new uses for thermal drones.

If your business needs to make careful aerial inspections of hard-to-reach infrastructure or to watch over personnel or assets at night or in adverse weather conditions, a thermal drone may fit your use case. As thermal camera payloads become more sophisticated yet simultaneously more affordable, the sky's the limit.

Drone options: Find the best thermal drone for your purposes

While your choice of camera payload is important for thermal drone performance, so is the commercial drone chassis you pick. The right drone body will deliver the speed, maneuverability, service range, battery life and other traits that will determine what types of tasks your new thermal drone can accomplish.

The following are a few of the market-leading commercial drones you can choose from for your thermal deployment.

The M2EA is an extremely compact and lightweight drone chassis that still contains a wide range of powerful features. It sports an integrated 640×512 thermal sensor capable of 16× zoom and a 30hz frame rate. The drone's RTK module allows centimeter-level positioning, and its ability to work with up to 240 waypoints makes it perfect for automated inspection missions, even in complex environments.

The M30T is a tough drone chassis built to stand up to the elements and designed to be highly portable despite its impressive sensor payload. The camera's specifications align with the M2EA — 640×152 resolution, 30fps. The control system for the M30T is especially advanced, with a 7-inch widescreen display on the dual-stick control system designed for enterprise drone pilot use. 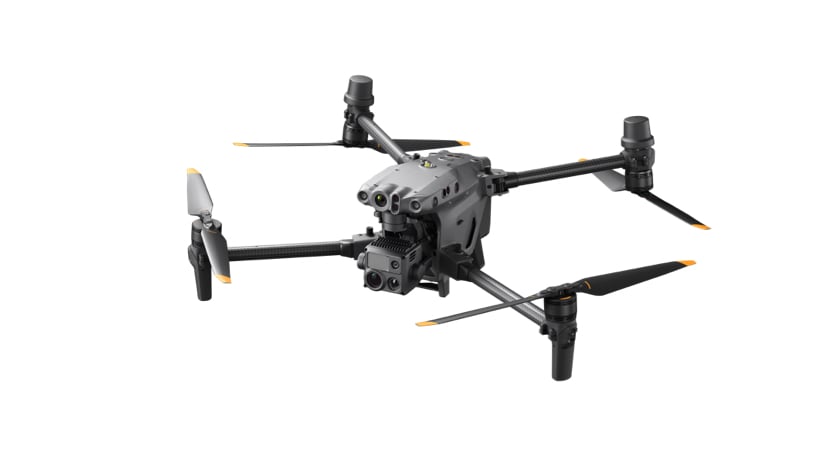 The M300 RTK is the latest in commercial drone technology, with the adaptability to carry up to three payloads simultaneously. At maximum, the drone may be equipped with one upward gimbal and two downward gimbals. The M300 RTK uses a new display system, incorporating more information into the primary screen, to help a drone operator navigate around any potential obstacles. Equipping the M300 RTK with a Zenmuse H20T or H20N as one of its payloads allows users to capture unprecedented levels of high-resolution thermal information.

Whichever thermal drone configuration you choose, you can further empower your users by selecting additional options. For example, the DJI Care Enterprise program, which includes all kinds of care and service for your equipment, no matter how many DJI drones are in your fleet. Investing in support helps you safeguard your investment and keep your thermal drones flying, no matter what they encounter.

With an ever-expanding list of use cases and a high degree of technological sophistication available today, there's never been a better time to dive into thermal drone use. Whether you're delivering new capabilities to your public safety personnel or creating an efficient new inspection method in utilities, agriculture or any other industrial setting, a thermal drone can add a new dimension to your operations.

To help you decide if a thermal imaging device is right for your unique set of circumstances, contact a DJI representative in your area.

Read more about how thermal drones have made a difference for our customers.

With the rise of large commercial buildings across the US, the demand for safe and effective inspection of rooftops has been growing substantially.
END_OF_DOCUMENT_TOKEN_TO_BE_REPLACED

We are now inching toward a place in time where most people begin to wonder: why did I make that New Year’s resolution? Well, we may not be able to help you out much in your pursuit of a “newer,...
END_OF_DOCUMENT_TOKEN_TO_BE_REPLACED

For most households, energy bills are a consistent and expensive outgoing. These costs peak during the winter months when the cold arrives. The U.S. Energy Information Administration predicted that...
END_OF_DOCUMENT_TOKEN_TO_BE_REPLACED

Delivery drones could very well be The Next Big Thing for businesses to deliver goods to their customers. They can also be extremely helpful in transporting sensitive items such as medical supplies...
END_OF_DOCUMENT_TOKEN_TO_BE_REPLACED