With the 3D models generated from DJI Terra, a Japanese city now has access to every little detail on the construction of a centuries-old historical monument

Japan’s topography and extreme climatic variations make the country strikingly prone to natural disaster. Earthquakes and tsunamis are common occurrences, as are volcanic eruptions, typhoons, floods, and mudslides. And yet, Japan is thriving. The nation and its people know how to bounce back from disasters.

Historic preservation is at the heart of Japan’s culture of efficacy and resilience. The people move on, but they don’t forget. When rebuilding in the wake of destruction, care is taken to not disrupt the historic fabric of cultural properties. And with Japan linking heritage closely with community development, there’s an emphasis on creating digital twins of historical structures to both memorialize and preserve them.

A Castle Rising Out of The Sea

Situated on the top of a small hill above the Karatsu Bay in Saga prefecture of Japan, Karatsu Castle is a sight to behold during azalea, cherry, and wisteria blossoms. The seaside castle, which is likened to the head of a crane, holds in itself more than 400 years of history and heritage. 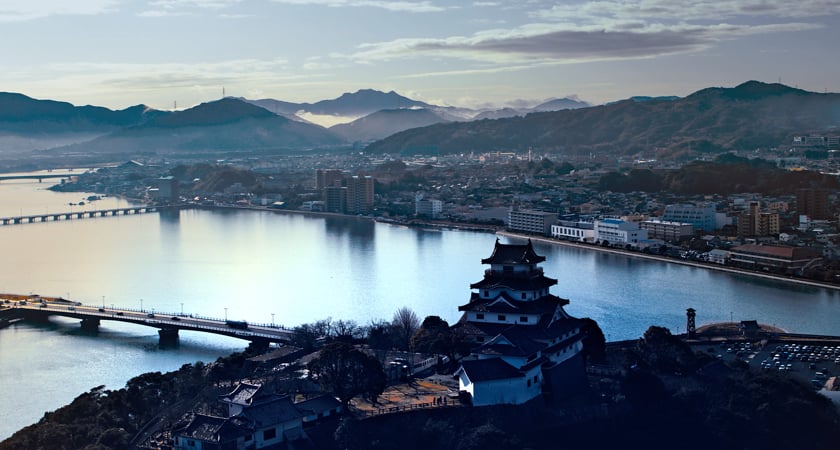 Construction of the Karatsu Castle began in 1602 and lasted for seven years. The castle remained a dignified symbol of the city until it was pulled down in 1872 after feudalism was abolished in Japan. The castle’s current five-story structure is a reconstruction that was built using traditional methods and techniques to mirror the 17th-century monument.

The stone walls that make up the castle tower are the only parts that remain from the original construction. Their historic value is immense.

“But these stone walls are being pushed out due to the effects of water seepage caused by earthquakes and heavy rains that have occurred many times in the past,” explains Satoshi Kimoto, City Planning Division, City of Karatsu, Saga Prefecture. The need to preserve and protect Karatsu Castle has never been more urgent. 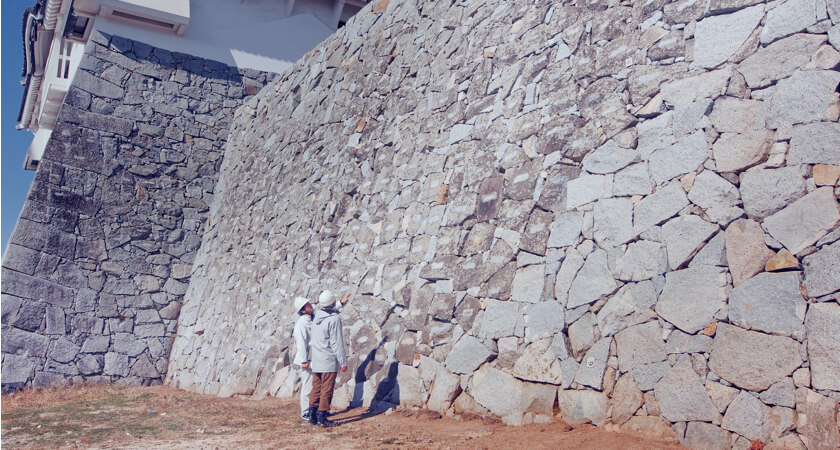 Toppen Co., Ltd, is a Saga Prefecture-based company that specializes in the digital preservation of properties and artifacts of cultural and historical importance. The task to preserve the heritage of the centuries-old castle was given to Toppen by the Karatsu City Lifelong Learning Cultural Property Division.

Senior Engineer Kenichiro Tanaka explains that, typically, the company would create architectural drawings from photographs to preserve the details of a building facade for posterity. In the case of Karatsu Castle, however, the conventional techniques wouldn’t suffice. “Since stone walls are a three-dimensional structure, traditional methods have limitations on reproducing the structure in its entirety and the most accurate form.”

With their current data-gathering methods not yielding the desired outcomes, Toppen decided to leverage the latest tools and technologies that would allow the company to take 3D measurements and create a high-resolution, realistic 3D model of the castle.

As the most compact, affordable, and accurate low-altitude mapping solution, the DJI Phantom 4 RTK was the clear choice for the job.

Since the P4 RTK utilizes both GNSS and a leading-edge RTK module to provide real-time, centimeter-level positioning data, Toppen did not have to worry about the absolute accuracy of the structural measurements. The team took comfort in the fact that the drone’s 20-megapixel CMOS sensor would capture the best imaging data within a single inch.

But the surveyors still needed a way to figure out if they had left out any gaps in the model. Toppen wanted a mapping solution that would allow the team to render and visualize a 3D point cloud of the surveyed area in real-time and let them decide if more flights were needed.

Enter, DJI Terra. The all-in-one drone mapping solution was selected for this work because no other software is as compatible with the P4 RTK as is Terra.

The intuitive and easy-to-use mapping platform supports oblique mission planning. This means Toppen could get an extra crisp view of Karatsu Castle by adjusting the angle of the P4 RTK’s camera at a tilted angle and cover any possible gaps in the model.

But remarkable levels of detail was not the only benefit that Toppen would get out of DJI Terra. The software would also save precious processing time for the team.

With Terra’s latest update making the mapping solution exponentially more efficient, the need for any special hardware to process the data has been eliminated. Terra requires only 1GB RAM to process 400 images from the P4 RTK – a certain advantage that meant Toppen had to carry only one drone and one device for processing to the castle site.

“DJI Terra has a surprisingly fast processing speed compared to any other modeling software we have used in the past,” Toppen’s Drone Pilot Yuji Kuwamizu tells. “With Terra, 3D data can be created immediately onsite, and using this data, our teams can make informed decisions quickly and efficiently.”

By leveraging the powerful combination of P4 RTK and DJI Terra, Toppen was able to realize rapid turnaround time. “Work that would ordinarily take several hours can now be completed in just a matter of minutes. And while data analysis could previously be achieved only within the confines of our offices, we can now process and analyze the data onsite and instantly check for any discrepancies,” explains Kuwamizu.

Ready for The Future

With the 3D models generated from DJI Terra, the City of Karatsu now has access to every little detail on the construction of its namesake castle. Kimoto from the City Planning Division says, “Once a stone wall is broken, it is very difficult to recover the site to its original state. Therefore, having an updated and well-documented record of the property is essential. These models can be saved and stored for future use, especially in the case of a natural disaster.”

Using the P4 RTK and DJI Terra, the City Planning Division has been able to capture the height and depth of the structure both accurately and efficiently. “We aim to use this data effectively, help maintain the structure of the stone wall created by our ancestors, and preserve it for now and for future generations,” Kimoto smiles.

Getting Started with DJI Terra

Read more about why Terra is the best mapping solution for your DJI drones and get the details of the software’s new updates.

To start a free trial, make a purchase, or request a consultation with an official DJI Enterprise dealer, please enter your details below.

Coastal erosion has become an increasingly severe problem in much of the United States. An analysis by the nonprofit research group Climate Central estimates that rising sea levels could wipe out...
END_OF_DOCUMENT_TOKEN_TO_BE_REPLACED

Energy is the essential ingredient of human evolution. It powers economies and sustains life as we know it. And yet our relationship with this precious commodity is at a turning point.
END_OF_DOCUMENT_TOKEN_TO_BE_REPLACED

When Alex Nunez left his native Venezuela for Miami in 2015 to be closer to his sister – and open the next chapter of life in a new city and country – the trained engineer decided to broaden his...
END_OF_DOCUMENT_TOKEN_TO_BE_REPLACED

In many parts of the world, where ships are used to import oil and gas products, refineries and storage terminals are typically located near navigable waters. Transfer between a moored ship and an...
END_OF_DOCUMENT_TOKEN_TO_BE_REPLACED