Baby Deer Saved from a Gruesome Fate Thanks to Thermal Drones

Ever since the release of Disney’s tear-jerker cartoon Bambi, people around the world have had a special affection for baby deer. So, it may come as a shock to discover that every year hundreds, if not thousands, of fawns are accidentally killed by farmers and their mowers as they tend their fields.

We are pleased to share, however, that innovators, conservationists, and commercial drone pilots are teaming up to create a life-saving solution that sees thermal drone technology deployed to protect vulnerable baby deer.

The saddening plight of baby deer 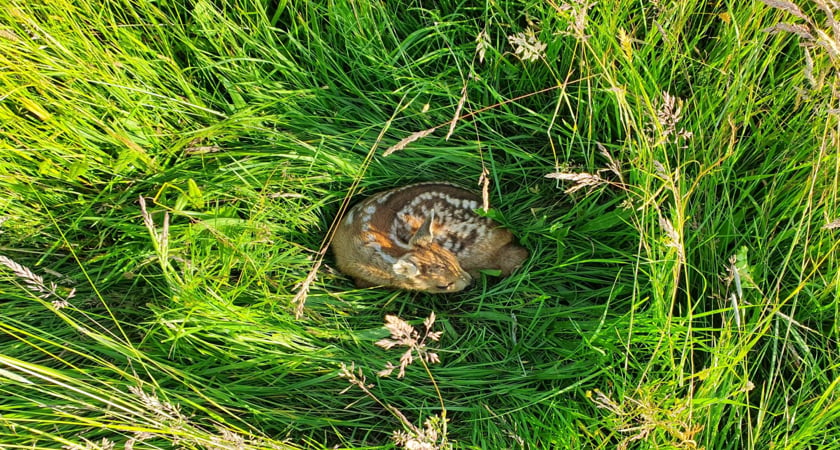 Between late April and early Summer, a female deer gives birth to one or two fawns who she protects from predators by nesting in the tall grasses of meadows and even domestic lawns. Unfortunately, these breeding patterns clash with farmers’ need to mow the meadows for hay. It is almost impossible for a mower operator to recognize the tiny figure of a baby deer, tucked away in the tall grass. To make matters worse, when confronted by danger a fawn’s natural instinct is to remain completely still making it that much harder for the mower operator to avoid killing or seriously maiming them. 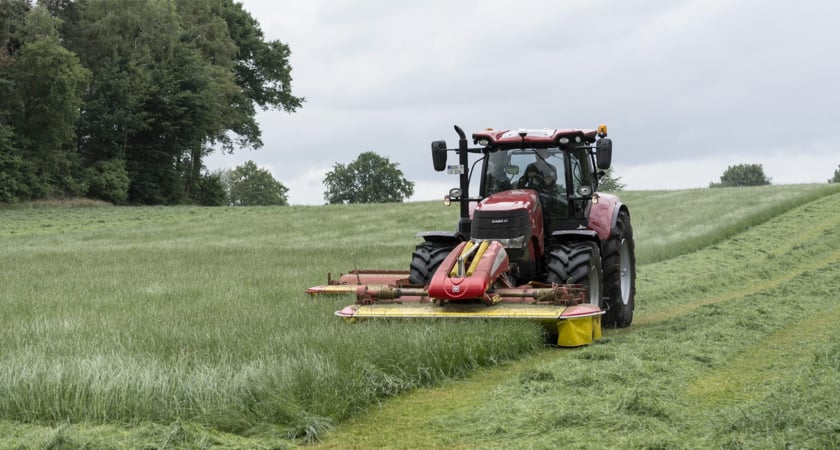 And there are some unsettling numbers to back this up – in Germany alone, it is estimated that around 90,000 fawns every year are killed by mowing machinery with similar numbers seen across Europe, from Norway to the Netherlands.

Until now, the sole solution to this problem has been for teams of farmers and dogs to manually check every field to check for nests - a laborious not to mention hit-and-miss method because of the difficulty of spotting the deer. It is also largely ineffective since newborn fawns do not have a distinct scent for dogs to follow. This extremely time-consuming and costly task means two to three people are only able to cover two hectares an hour, and that a single farmer’s entire collection of fields may take several days if not more.

Why save baby deer? 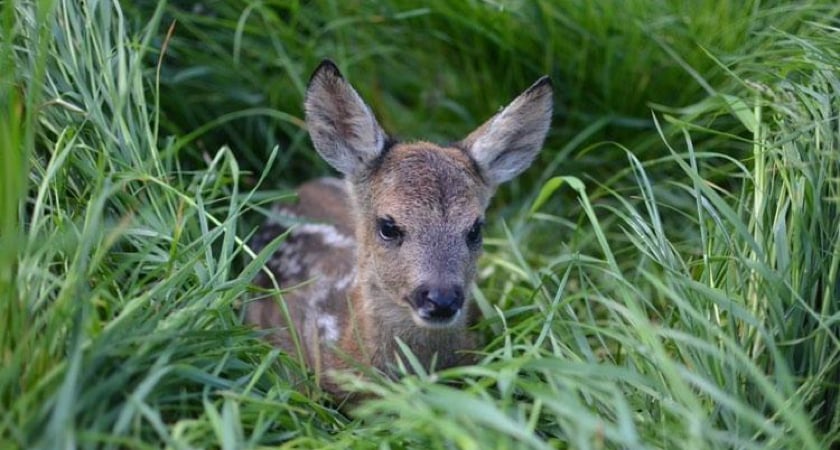 For farmers, the necessity to sweep their fields for fawns before mowing is not simply a moral one - there is also an impact on the livelihood of the farmer since the remains of any deer that are inadvertently killed can pollute the grass and hay. As a corpse decays it can contaminate what would have been used as feed for various animals as well as potentially spreading a fatally dangerous toxin. More commonly known as “corpse poison,” botulinum toxin will paralyze animals such as cows and horses before an unpleasant and agonizing death by suffocation. This places even further financial burden on farmers who then need to find new (and costly) ways to feed their livestock.

There are legal implications too. In the United Kingdom, for example, the Animal Welfare Act of 2006 condemns the killing of vertebrate animals without a sufficient reason and doing so can incur a significant fine or in some extreme cases a prison sentence of up to three years. At the same time, farmers must also consider the impact on biodiversity with deer populations playing a crucial role in local habitats

To confront this issue, German association Flugmodus e.V have turned to drone technology. Founded in 2020, the group has been working with drone supplier DroneParts.de to develop wildlife protection drones that utilize the powerful visual and thermal cameras mounted on a Mavic 2 Enterprise Advanced (M2EA) so that farmers can quickly and easily spot fawns in their nests. 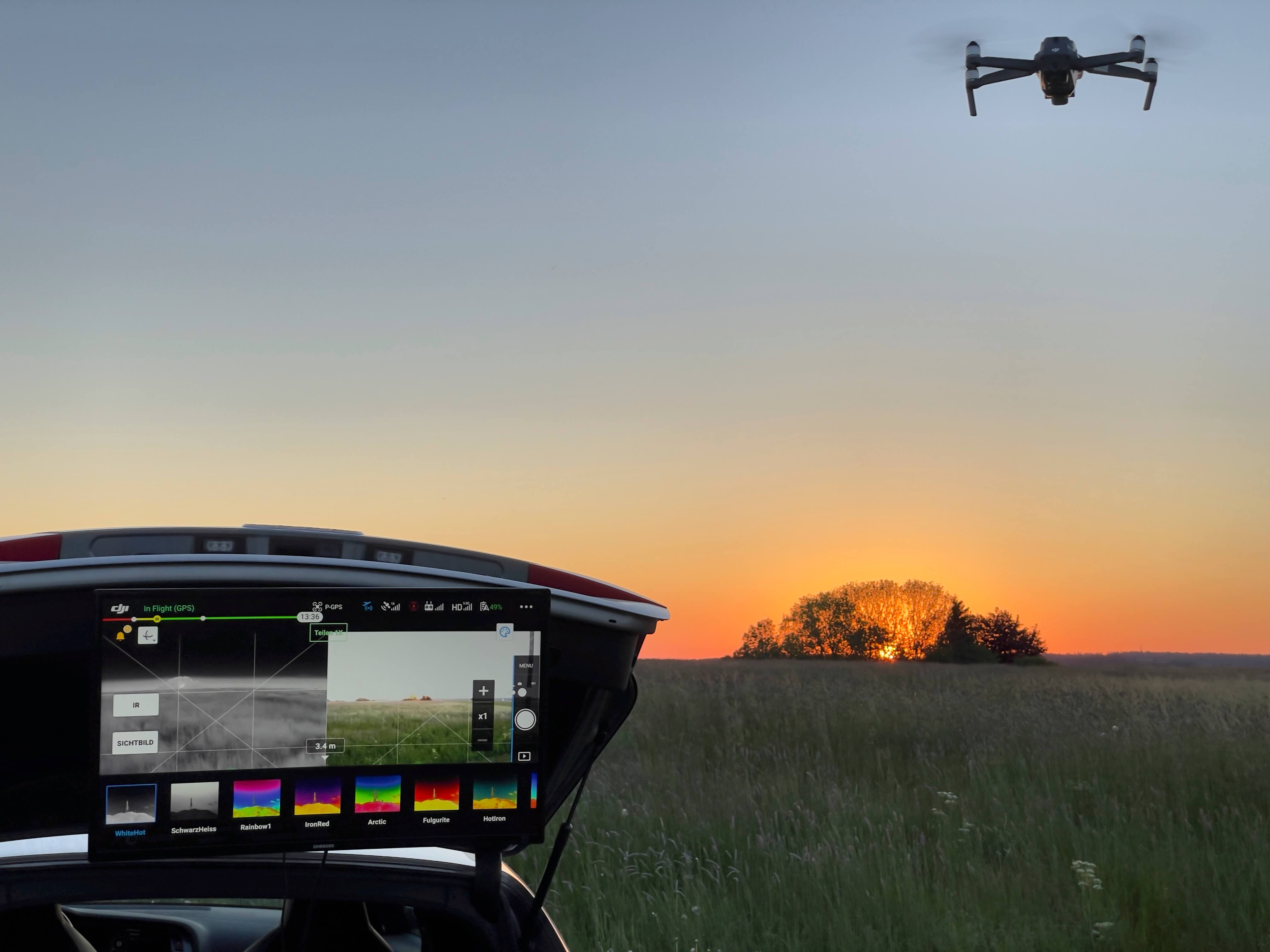 Prior to mowing a field, an M2EA is flown above to identify any fawns hidden within the grass from “hotspots” on the thermal camera. This works in tandem with the visual camera that allows a ground search team to efficiently locate the fawns and move them to a safer place. 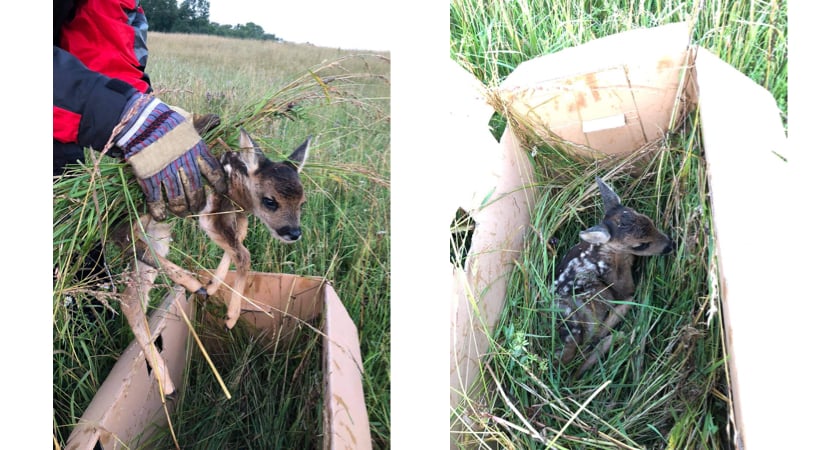 After the mowing is complete, the fawns are released to a spot where they remain protected within the tall grass. Interestingly, this method has no impact on the doe’s ability to find her young again, as the amount of tall grass will leave no human scents on the baby deer. 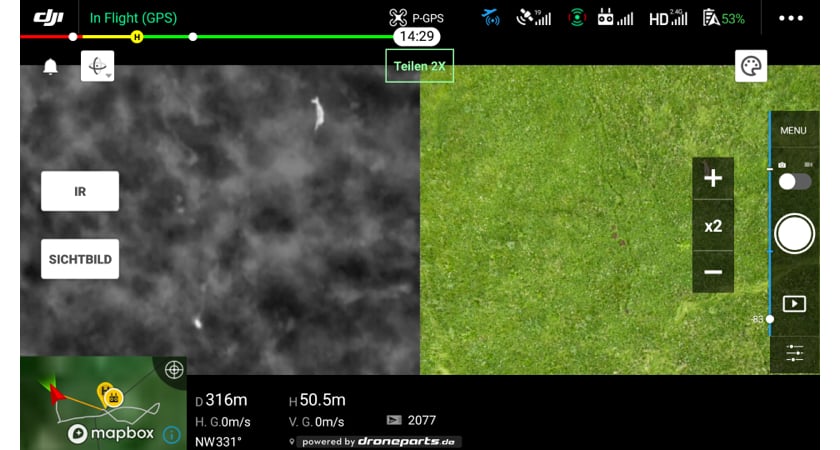 This means that operators can quickly identify potentially nesting deer from thermal hotspots before getting a visual confirmation. At the same time, it is also equipped with omnidirectional obstacle sensing and an RTK module that provide centimeter-level positioning accuracy making it both simple and safe to operate. 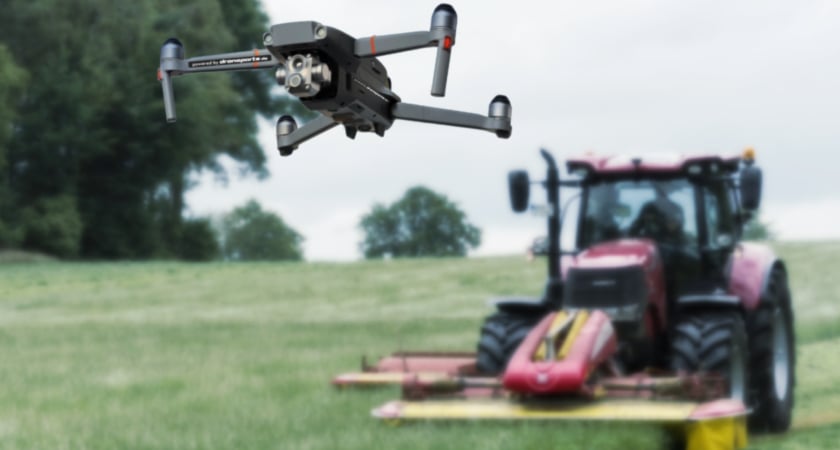 To make things easier, the Mission Flight setting on the DJI Pilot app can create an autonomous flight path. Operators simply set a defined area for checking, or specific waypoints, and then select the required altitude. For these wildlife protection operations, Flugmodus e.V recommends a height anywhere between 40-80m, with 60m the optimal altitude. While higher altitudes will ensure a quicker operation because the drone can cover greater areas in a shorter time, lower altitudes provide better resolutions which can be important for spotting the elusive fawns. For an operator to search a field properly and ensure everything has been covered, the overlap should also be set to 10%. 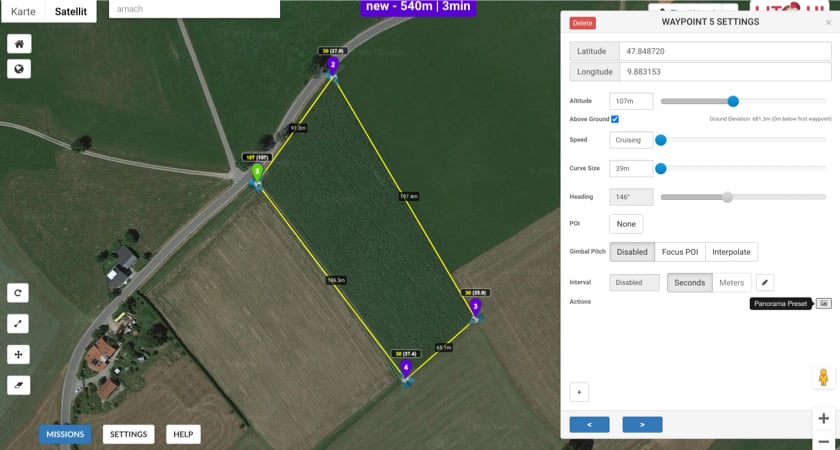 Flugmodus e.V tends to conduct drone wildlife protection operations at night or in the early morning between 8 pm and 8 am. This is when the temperature difference between the cold ground and a warm deer is at its greatest making them much simpler to spot. If the drone operator spots a potential fawn, they can pause the operation using the remote controller and zoom in with the 4K RGB camera to get a more detailed view of a particular area and/or lower the drone’s altitude. The flight can then be easily resumed once a team has identified a baby deer and removed it to safety. 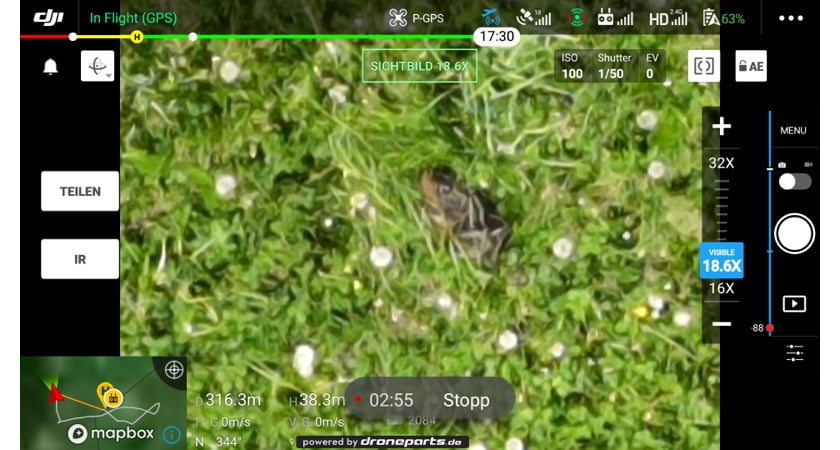 The thermal camera has a range of palettes, of which Flugmodus e.V recommends using Whitehot and Blackhot so that the heat signatures of potential fawns can be easily interpreted by the naked eye. 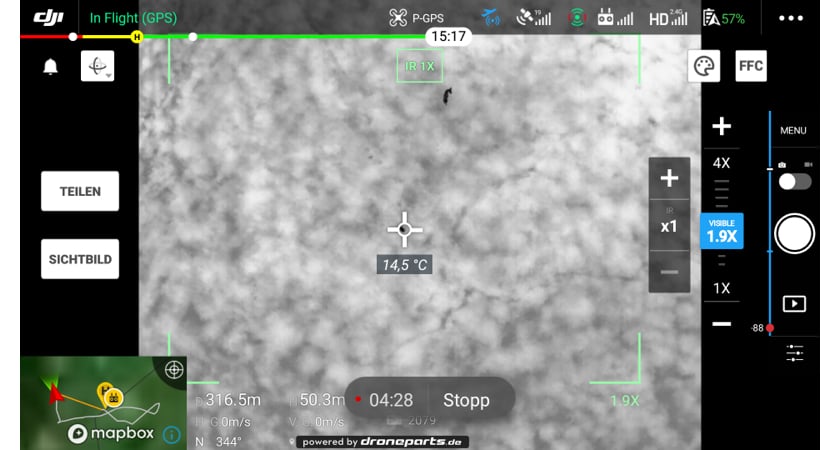 The results so far…

So far, the drone wildlife protection initiative has proven highly effective. In Graubünden, Switzerland, for instance, similar technology was used during the harvest season with around 450 fawns saved. And it is hoped that something similar could be used to help not just deer, but a whole host of other wildlife in precarious situations. As such, the renowned Swiss university and research center, École Polytechnique Fédérale de Lausanne, has hailed the efforts as 100% effective. 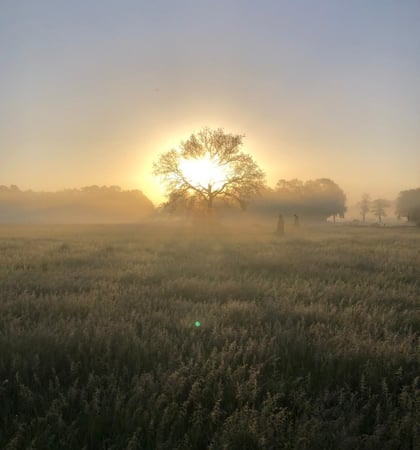 Are you in Germany and do you want to help save baby deer?

Since March 19, 2021, the German Federal Office for Food and Agriculture has been providing applicants who would like to protect wildlife with funding to purchase thermal drones. Many organizations have already received permits and can now buy one or two drones to help rescue fawns. Applications are open until September 1, 2021.

Coastal erosion has become an increasingly severe problem in much of the United States. An analysis by the nonprofit research group Climate Central estimates that rising sea levels could wipe out...
END_OF_DOCUMENT_TOKEN_TO_BE_REPLACED

Energy is the essential ingredient of human evolution. It powers economies and sustains life as we know it. And yet our relationship with this precious commodity is at a turning point.
END_OF_DOCUMENT_TOKEN_TO_BE_REPLACED

When Alex Nunez left his native Venezuela for Miami in 2015 to be closer to his sister – and open the next chapter of life in a new city and country – the trained engineer decided to broaden his...
END_OF_DOCUMENT_TOKEN_TO_BE_REPLACED

In many parts of the world, where ships are used to import oil and gas products, refineries and storage terminals are typically located near navigable waters. Transfer between a moored ship and an...
END_OF_DOCUMENT_TOKEN_TO_BE_REPLACED